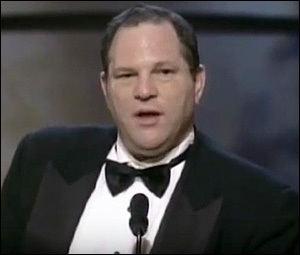 Matthew Garrahan dropped a bigger bombshell in the Financial Times yesterday than even he realizes. Garrahan named the law firm that had crafted a gag order in 1998 to silence two women from ever speaking about their encounters with Harvey Weinstein. One woman, Zelda Perkins, was an assistant to Weinstein in London and charged him with egregious sexual harassment. The other unnamed female colleague charged Weinstein with sexual assault. The two were paid $125,000 each and given an iron-clad gag order. The terms of the gag order were so confidential that the women were not even allowed to have a full copy of what they had agreed to, just a summary of some of its terms.

The law firm representing Weinstein with the settlements and gag orders (officially called non-disclosure agreements) was Allen & Overy – the London derivatives powerhouse that also signed off on the Structured Investment Vehicles (SIVs) that played a significant role in helping to blow up Citigroup in 2008, resulting in the largest taxpayer bailout of a bank in financial history.

You don’t have to take our word for this. One of Allen & Overy’s own lawyers actually bragged on the law firm’s website about the key role it played in the “fascinating time” of the financial crisis – the most devastating economic collapse since the Great Depression that left millions of Americans out of work and foreclosure notices on their front door.

Elizabeth Collett described at the time on Allen & Overy’s website that 2007 summer and fall of financial hell as follows:

“The summer of 2007 was a fascinating time for those of us involved in the structured credit markets. Since I joined A&O’s derivatives and structured finance group as an associate in 2004 the capital markets had been growing very fast. With the onset of the credit crunch, however, our work changed from advising investment banks setting up complex finance structures to focusing on how existing structures would be affected by reduced liquidity and falling asset values.

“Structured Investment Vehicles (SIVs) were particularly hit hard given that they rely on constant funding and high credit ratings (which were, in part, reliant on the value of their assets). At its peak, the SIV market was worth around $400 billion (held by 30 vehicles), so it was not long before concern arose that these vehicles might start selling billions of dollars of assets into an already volatile market. In the early Autumn of 2007 the US Treasury called in a number of the biggest US investment banks and asked them to come up with a solution to the problem. Citibank, the largest of them, and the market leader in terms of managing SIVs, took on the challenge. Given A&O’s wealth of experience in advising on SIVs and, in particular, as Citibank’s English counsel on all the SIVs managed by them, we were the natural choice to advise and were therefore the first to be instructed.

“Although by the time the transaction ended there were six law firms (A&O being the only English law advisers), three structuring banks and an investment manager involved, I was fortunate enough to see the deal progress from the beginning. What came out of Citibank’s proposals, developed with our advice, was the Master Liquidity Enhancement Conduit (MLEC or, as the press dubbed it, the ‘Super-SIV’).  I was the lead associate in the A&O team, working with five partners and a number of other associates. I was involved at every stage including co-ordinating the A&O team, drafting parts of the term sheet, participating in conference calls to brainstorm the structure, reviewing and commenting on transaction documents and preparing draft agreements. Over the following two months the media coverage of the transaction gathered momentum (unsurprisingly since it was intended as a $100 billion solution to the SIV crisis) until there were almost daily reports on its progress in the Financial Times and the Wall Street Journal. It was fascinating to be working on such a high profile and politically sensitive transaction, and the media attention highlighted the fact that Allen & Overy is at the very forefront of the legal world in capital markets.”

The Master Liquidity Enhancement Conduit never made it off the ground as major Wall Street firms saw it for what it was – a not so subtle effort to bail out Citigroup by getting big Wall Street firms to chip in.

What actually saved Citigroup was a gun to the head of the taxpayer. Before it was all over, the U.S. Treasury pumped $45 billion in capital into Citigroup; the government guaranteed over $300 billion of Citigroup’s assets; the Federal Deposit Insurance Corporation (FDIC) guaranteed $5.75 billion of its senior unsecured debt and $26 billion of its commercial paper and interbank deposits; and the Federal Reserve secretly sluiced $2.5 trillion, cumulatively, in almost zero-interest loans to Citigroup.

And here’s the really sad part: to this day no one knows why Citigroup was worth saving. Its serial violations have continued since its bailout, including a felony count to which it admitted in 2015 related to its participation in a cartel to rig the foreign exchange market.

As for the legal cunning of Allen & Overy, the Financial Times describes its gag order for Zelda Perkins in the Weinstein matter as follows:

“There are plenty of clauses in it to direct and curtail her future behaviour, including if she were ever asked to provide testimony. One says that if ‘any criminal legal process’ involving Harvey Weinstein or Miramax requires her to give evidence, she will give 48 hours notice to Mark Mansell, a lawyer at Allen & Overy, ‘before making any disclosure’.

“In the event her evidence is required, ‘you [she] will use all reasonable endeavours to limit the scope of the disclosure as far as possible’, the agreement says, adding that she will agree to give ‘reasonable assistance’ to Miramax ‘if it elects to contest such process’.

According to the Financial Times, this gag order was signed in 1998. It buried for the past 19 years a claim of sexual assault by Harvey Weinstein – a charge that rightfully belonged with the police.

At the peak of the financial crisis, Citigroup was trading as a 99 cent stock. Its shareholders lost the vast majority of their money and then the company did a 1-for-10 reverse split, leaving shareholders with 100 shares for every 1,000 shares they had previously owned.