How Many Times Can the President Be Called “Unfit” Before It Undermines Confidence in America? 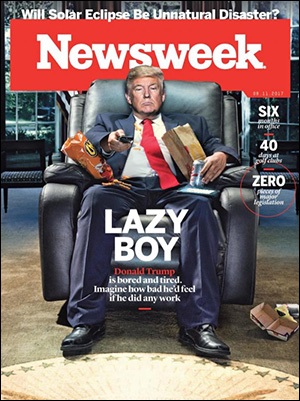 The point of having a President is that in times of crisis there is one leader who can speak quickly and directly to anxious citizens and rally their confidence and trust and optimism to push forward to create a better day for themselves and their country. Franklin Delano Roosevelt was the embodiment of such a leader.  We have reprinted below his Christmas Eve message to the nation on December 24, 1941 as a much-needed reminder of how a President of these United States should conduct himself in a time of crisis.

In the case of President Donald Trump, it took him four days to pull himself away from public bickering with NFL athletes and notice that an unprecedented humanitarian disaster was unfolding in Puerto Rico following the devastation unleashed there by a direct hit from Hurricane Maria. Then, over the next ten days, the President alternated between reminding Puerto Ricans, all of whom are U.S. citizens, that they must deal with their debt to Wall Street; get their financial house in order; and adding a final Tweeted insult that implied Puerto Ricans were lazy slackers waiting for a handout. What kind of leader talks to his own citizens like that when they don’t know where they will find food or water to survive over the next week and when 95 percent of the 3.4 million residents of Puerto Rico remain without electricity.

“Reports from post-hurricane Puerto Rico tell of American citizens experiencing a level of humanitarian desperation usually seen only in the poorest of countries. As of Saturday, according to the Department of Defense, only 45 percent of customers on the island had access to drinking water. People are frantically seeking food and medical supplies, and there’s not enough diesel to deliver much of the aid that’s reached San Juan. While that city’s mayor pleaded with the world for help, the president of the United States tweeted racially inflected insults at her and her people from his golf club. He implied they are lazy and ‘want everything to be done for them’ rather than helping themselves.”

Donald Trump has been President of the United States for just over eight months. For many of us, it feels like an eternity in hell. Each time we read the word “unfit” or a similar headline assessment describing the President of our country, we cringe with the realization that our nation is losing the confidence of our allies around the world and the positive outlook of  our fellow Americans is being deeply eroded.

On June 30 of this year, the headline “Donald Trump Is Not Well,” ran over an OpEd at the Washington Post by Mika Brzezinski and Joe Scarborough, hosts of the MSNBC show, Morning Joe. The OpEd came in response to a sexist rant against Brzezinski by the President of the United States the prior day on his Twitter page. Invoking for the second time his fixation about women and blood, the President called Brzezinski “low I.Q. Crazy Mika” and said that at a prior visit to his Mar-a-Lago residence in Palm Beach she was “bleeding badly from a face-lift.” (The hosts called the face-lift allegation a lie.) Adding some evidentiary support to their claim that the President “is not well,” the MSNBC hosts wrote:

“From his menstruation musings about Megyn Kelly, to his fat-shaming treatment of a former Miss Universe, to his braggadocio claims about grabbing women’s genitalia, the 45th president is setting the poorest of standards for our children.”

In July, David Rothkopf, a Washington Post columnist and visiting scholar at the Carnegie Endowment, wrote that “for the first time in three decades in the world of foreign policy,” he was “getting regular questions about the mental health of the president.” Rothkoph explained:

“That is where we are now. The president’s tweeting hysterically at the media is just an element of this. So too is his malignant and ever-visible narcissism. The president has demonstrated himself to have zero impulse control and a tendency to damage vital international relationships with ill-considered outbursts, to trust very few of the people in his own government, and to reportedly rant and shout at staff and even at the television sets he obsessively watches.”

How can we light our trees? How can we give our gifts?

How can we meet and worship with love and with uplifted spirit and heart in a world at war, a world of fighting and suffering and death?

How can we pause, even for a day, even for Christmas Day, in our urgent labor of arming a decent humanity against the enemies which beset it?

These are natural—inevitable—questions in every part of the world which is resisting the evil thing.

Looking into the days to come, I have set aside a day of prayer, and in that Proclamation I have said:

“The year 1941 has brought upon our Nation a war of aggression by powers dominated by arrogant rulers whose selfish purpose is to destroy free institutions. They would thereby take from the freedom-loving peoples of the earth the hard-won liberties gained over many centuries.

“The new year of 1942 calls for the courage and the resolution of old and young to help to win a world struggle in order that we may preserve all we hold dear.

“We are confident in our devotion to country, in our love of freedom, in our inheritance of courage. But our strength, as the strength of all men everywhere, is of greater avail as God upholds us.

“Therefore, I… do hereby appoint the first day of the year 1942 as a day of prayer, of asking forgiveness for our shortcomings of the past, of consecration to the tasks of the present, of asking God’s help in days to come.

“We need His guidance that this people may be humble in spirit but strong in the conviction of the right; steadfast to endure sacrifice, and brave to achieve a victory of liberty and peace.”

Our strongest weapon in this war is that conviction of the dignity and brotherhood of man which Christmas Day signifies — more than any other day or any other symbol.

Against enemies who preach the principles of hate and practice them, we set our faith in human love and in God’s care for us and all men everywhere.

It is in that spirit, and with particular thoughtfulness of those, our sons and brothers, who serve in our armed forces on land and sea, near and far — those who serve for us and endure for us that we light our Christmas candles now across the continent from one coast to the other on this Christmas Eve.

We have joined with many other Nations and peoples in a very great cause. Millions of them have been engaged in the task of defending good with their life-blood for months and for years.

And so I am asking my associate, my old and good friend, to say a word to the people of America, old and young, tonight Winston Churchill, Prime Minister of Great Britain.