Obama Has the Same Retirement Plan as the Clintons: Lavish Speaking Fees from Wall Street 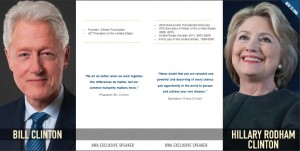 The “Wall Street Democrats” is the wing of the party created by the Clintons and nurtured further by Barack Obama. It takes money hand over fist from Wall Street for political campaigns, wags a warning finger at Wall Street from the public podium while stuffing its administrations with Wall Street execs, then its leadership reaps millions of dollars in personal speaking fees from the robber barons after leaving office. As of this morning, there’s no longer any debate that Obama is firmly entrenched in this cozy world of money.

Adding to the intrigue, Obama’s future roster of private speeches to Wall Street banks is not available for public inspection. Equally problematic, while it was widely reported in February that Obama has signed with the Harry Walker Agency to represent him for speaking engagements, that agency showcases Bill and Hillary Clinton in its 2017 Speakers Bureau brochure while Obama goes missing.

Adding to the curiosity, which went unreported in the Bloomberg article, the Twitter account for the Harry Walker Agency is promoting appearances by its other speakers from Obama’s administration (it represents a stable full) but when we went back months on its Twitter account, we found no mention of Obama’s private speeches that have already occurred since he left office.

One might be prone to speculate that Obama has a contractual clause in his agreement with the Harry Walker Agency that it cannot advertize his speaking schedule or to whom he is delivering his highly compensated speeches.

The Cantor Fitzgerald fee of $400,000 was reported by multiple media outlets in April. While Cantor was historically known as a government bond house, in the leadup to the 2008 financial crash it also dealt in the credit default swaps that played a key role in the crisis. In April of this year, Jill Abramson reported on the $400,000 fee to be paid by Cantor in an article for The Guardian, writing that “The habitual kowtowing of senior Democrats to the billionaire class has left their party close to morally bankrupt. Bernie Sanders was right to hammer Hillary during the primaries for her speaking fees from Wall Street. Even her most ardent supporters found these speaking fees indefensible. They were certain to be fodder for her opponents.”

The Associated Press has previously reported that both the former First Lady, Michelle Obama, and Barack Obama are being represented by the Harry Walker Agency for speaking engagements.

It’s not like the Obamas need the money. According to multiple reports early this year by major media, the couple will receive upwards of $65 million from Penguin Random House to publish their respective memoirs.

What the Obamas are doing now would seem to follow in lockstep with the road to riches followed by the Clintons after leaving the White House. As Wall Street On Parade previously reported in 2014 in an article titled “Hillary and Bill: Their Rugged Journey from Paupers to One-Percenters in 365 Days,” Hillary Clinton’s on-air statement to ABC’s Diane Sawyer in 2014 that she and former President Bill Clinton were “dead broke” when they left the White House in January 2001 missed the mark by a mile.

Hillary had explained to Sawyer: “We came out of the White House not only dead broke, but in debt. We had no money when we got there, and we struggled to, you know, piece together the resources for mortgages, for houses, for Chelsea’s education. You know, it was not easy.”

Wall Street On Parade countered that with this:

“Former Presidents are not ‘dead broke’ by any possible interpretation. They receive a pension, which is currently 10 times the poverty level for a family of three; monies for staff, travel, an office, postage and supplies and Secret Service protection for themselves and their spouse.

“The President’s pension kicks in as soon as he leaves office. According to the Congressional Research Service, former President Clinton received in pension and other perks, adjusted for 2013 dollars, $335,000 in fiscal year 2001; $1.285 million in 2002, and over $1 million every year thereafter through 2011. Since 2011, the outlay by the taxpayer for former President Clinton has been just under $1 million. Including what is budgeted for fiscal year 2014, Clinton will have received a taxpayer outlay of $15,937,000 since leaving the White House in 2001.”

As for Bill Clinton’s speaking fees in his first year out of the White House, we reported the following:

“Both of the Clintons likely knew they would become multi-millionaires very rapidly upon leaving the White House. Just sixteen days after George W. Bush was sworn in on January 20, 2001, Bill Clinton delivered his first speech for $125,000 to Wall Street brokerage and investment bank Morgan Stanley.  The speeches continued every few days, with the former President earning an eye-popping $1.475 million in just his first two months out of office. The price per speech has reached $250,000, $300,000 even $500,000 at times. The Clintons earned millions more in book advances and royalties.

“According to the joint tax return released by the Clintons, in that 2001 year of financial desperation, the couple reported unadjusted gross income of $15.6 million in business income (mostly from Bill Clinton’s speeches); pension payments of $152,700; dividends of $172,621 and wages of $154,952.”

After Hillary lost the Presidential election in 2016, in no small part because of her close financial ties to Wall Street and her obscene speaking fees from Goldman Sachs and other Wall Street firms, it is a tragic commentary on the greed within the so-called leadership of the party that former President Obama is following along the same jaded path. We can only hope it will be the final straw to give the real progressive wing of the Democratic Party, that led by supporters of Senators Bernie Sanders and Elizabeth Warren, a groundswell of support from the bench sitters.