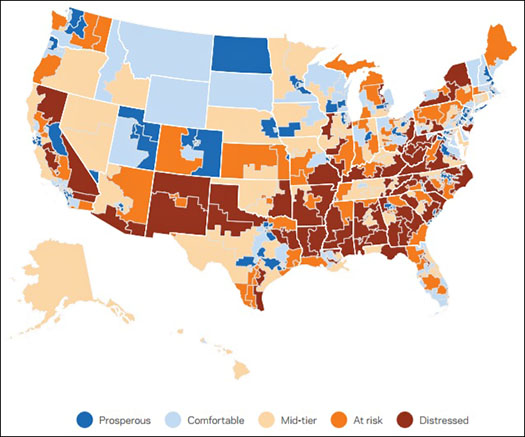 A new study backs up a theory that many Americans have long suspected: the U.S. is no longer the land of opportunity, despite what national statistics would have us believe. Rather, America is now narrowly constrained to zip codes of opportunity.

The new research comes from the Economic Innovation Group (EIG), a bipartisan public policy organization funded by successful tech entrepreneurs. The study provides detailed data on the economically distressed communities that have fundamentally changed the economic landscape of America. The authors write:

“A remarkably small proportion of places fuel national increases in jobs and businesses in today’s economy. High growth in these local economic powerhouses buoys national numbers while obscuring stagnant or declining economic activity in other parts of the country. EIG’s prior work shows that this trend represents a fundamental shift in the geography of economic growth in the United States.  Geographic disparities have, of course, always existed in this country, but the prospects of different communities used to rise or fall together to a far greater extent than they do today. Now, national statistics are often far removed from the experience of the typical American community.”

Some of the key findings from the groundbreaking study are the following:

One of the most disturbing findings is that the so-called “economic recovery” has been a cruel illusion to a large swath of the U.S. The authors write: “Most distressed zip codes contain fewer jobs and places of business today than they did in 2000.”

The new study builds on 2016 research from EIG which looked at the uneven geographic rate of new business formation following the financial crisis of 2008. The authors wrote in last year’s report:

“The muted increase in new business establishments at the national level was not due to a universal decline in the rate of establishment openings (even though the rate is in long-term decline). One-fifth of all U.S. counties actually saw faster increases in business establishments from 2010 to 2014 than from 2002 to 2006. Rather, subdued national-level growth was the product of a geographically uneven collapse in new business formation that set in across wide swathes of the country but left other corners relatively untouched.”

EIG is headquartered in Washington, D.C. and states as a mission objective the goal of bringing “geographic inequality into the national conversation, analyzing the impact of the decline in entrepreneurship and economic dynamism, and exploring the future of the economy.” 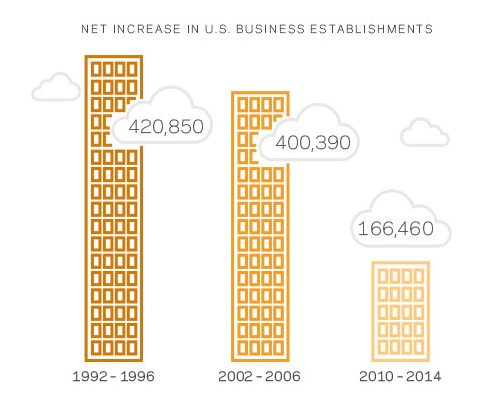