Hurricanes Katrina, Sandy, Harvey and Irma: It’s Time for the Public to Reclaim the National Budget 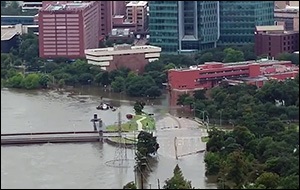 Flooding in Houston from Hurricane Harvey

After the devastation of Hurricane Katrina and Super Storm Sandy, most rational nations would have imposed restrictions on coastal building and devoted meaningful portions of the national treasury to fund scientific research to limit future loss of life and economic hardships from such monster storms. And yet, here we are in 2017 facing the current reality: vast swaths of a major economic hub, Houston, lies in ruins from the flooding unleashed by Hurricane Harvey while the entire State of Florida awoke this morning to the chaos unleashed yesterday and overnight by the bizarre 415 mile-wide Hurricane Irma, with a reported 4.5 million homes and businesses currently without power in Florida, a state where temperatures routinely reach into the 90s in September and air conditioning is a necessity, not a luxury.

The leadership in Washington has not reflected that of a rational nation for many years now and, tragically, U.S. citizens, for the most part, have allowed their  democracy to become a spectator sport.

We currently have a President who has withdrawn the United States from the Paris Climate Accord, putting at risk international cooperation to combat global warming and sea level rise, two clear contributing factors to the increasing frequency of the so-called 500-year storm. As David Dayen wrote recently at the New Republic:

“The city [Houston] suffered a ‘500-year flood,’ defined as one with a 0.2 percent chance of occurring in a given year based on past experience, in 2015. It had another 500-year flood in 2016. And it’s experiencing something much bigger than a 500-year flood right now. Maybe it’s time to admit that past performance is no longer any indication of future results.”

The leadership in Washington has, for many years now, cared so little about its responsibility to its citizens that it doesn’t even bother to keep the national books in order to account for how it is spending taxpayers’ money. According to a report released last year by the watchdog for Congress, the nonpartisan Government Accountability Office (GAO), an audit showed that the U.S. government can’t reliably report a significant portion of its assets, liabilities, or expenditures. The Department of Defense is one of the largest black holes. The GAO reported that “serious financial management problems at DOD” had “prevented its financial statements from being auditable.” While the U.S. spends more in military outlays than the eight other largest spending countries combined, the leadership in Washington doesn’t feel it needs to account to the public as to where and how billions of dollars in military outlays are being deployed. The public tolerates this insanity.

The attitude by U.S. leadership in Washington to just throw some money at each passing monster storm and sit back and wait for the next disaster stands in stark contrast to the attitude of the Dutch. In a 2015 report for the Environmental Defense Fund, Shan­non Cun­niff wrote:

“The Netherlands doesn’t fool around with floods. After a devastating North Sea flood in the 1953 resulted in 1,800 deaths, the nation adopted a ‘never again’ attitude.

“Today, a national system of dikes and surge barriers provide a level of protection unheard of in the U.S. – protection against an event with a probability of occurring once every 10,000 years. That’s not a typo.”

Most, if not all, of the major problems that plague the United States today are merely symptoms of one overarching, malignant disease: a corrupt campaign finance system that is preventing U.S. citizens from having a real voice in their government; a system that fosters a pay-to-play model that is creating perverse economic outcomes. Big Oil benefits greatly from Trump’s stance on climate change; the citizens devastated by the latest monster storms do not.