The De-Branding of a President 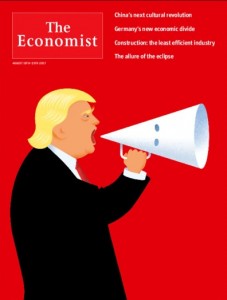 Promising to cut corporate taxes, roll back regulations on Wall Street, and get government off the back of business, Donald Trump was enjoying a honeymoon with the stock market and the CEOs of the most iconic brands in the U.S. What a difference four days can make.

Yesterday, the Dow Jones Industrial Average dropped 274 points. Also yesterday, Trump announced that he was cancelling his business advisory council on infrastructure. That move followed his prior day’s axing of his star-studded CEO councils on manufacturing and Strategy & Policy Forum. According to published reports, Trump was saving face by axing the councils after getting a heads up that the CEOs were leaving en masse.

The rapid move by top CEOs to distance themselves and their brands from the President came after Trump delivered impromptu remarks on Tuesday in the lobby of Trump Tower in Manhattan, where he appeared to equate the KKK and neo-Nazi groups that protested in the weekend Charlottesville, Virginia rally with the protesters opposing them.

The question now is this: if Trump has lost the confidence of big business, exactly what is his presidency about?

On May 19 of this year, Der Spiegel, one of the most widely read news magazines in Europe, published a brutal assessment of the President of the United States. Written by its Executive Editor, Klaus Brinkbäumer, the editorial made the following observations:

“Donald Trump is not fit to be president of the United States. He does not possess the requisite intellect and does not understand the significance of the office he holds nor the tasks associated with it. He doesn’t read. He doesn’t bother to peruse important files and intelligence reports and knows little about the issues that he has identified as his priorities. His decisions are capricious and they are delivered in the form of tyrannical decrees.”

Now, another widely read magazine on the global stage, The Economist, has delivered a one-word headline assessment of the U.S. President: “Unfit.” Behind a magazine cover showing Trump using a Ku Klux Klan hood refashioned into a bullhorn, the authors write:

“Mr Trump’s inept politics stem from a moral failure. Some counter-demonstrators were indeed violent, and Mr Trump could have included harsh words against them somewhere in his remarks. But to equate the protest and the counter-protest reveals his shallowness. Video footage shows marchers carrying fascist banners, waving torches, brandishing sticks and shields, chanting ‘Jews will not replace us’. Footage of the counter-demonstration mostly shows average citizens shouting down their opponents. And they were right to do so: white supremacists and neo-Nazis yearn for a society based on race, which America fought a world war to prevent. Mr Trump’s seemingly heartfelt defence of those marching to defend Confederate statues spoke to the degree to which white grievance and angry, sour nostalgia is part of his world view.” 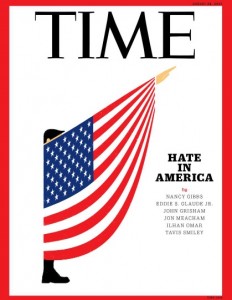 Time Magazine is also using its cover to elevate the debate about the resurgence of hate groups in America. Nancy Gibbs, one of a series of writers for Time on the topic, writes:

“Having long petted and pampered the demons of racial politics, President Trump should have known his response would get maximum attention. Most successful leaders, certainly most Presidents, preach an American gospel about freedom, justice, imagination, ambition. They invoke enduring values in the service of both achieving goals and healing wounds. But that is not this President’s liturgy. Instead of summoning our better angels, he strums deep chords of grievance and resentment: The world is not a community; it’s a business. If you’re not winning, you’re losing. And anyone who invests in a common good or a shared sacrifice is a sucker.” 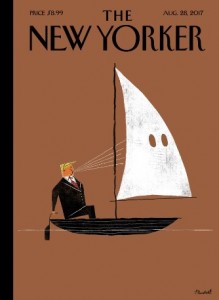 The upcoming New Yorker cover is the most brutal of all, captioned inside as “Blowhard,” and showing Trump providing the wind for a shallow-hulled boat with a Ku Klux Klan sail. Yesterday, John Cassidy wrote these words at the New Yorker:

“By dint of his pigheadedness, or prejudice, or both, he has moved onto political ground that makes it virtually impossible for other people in influential positions, such as C.E.O.s, or the heads of other organizations, or senior government officials, or celebrities, or even his own Cabinet members, to stand with him, or even to be seen to cooperate with him. That is what happens when a President throws away his own legitimacy.”

This is not just a crisis for Republicans but a crisis for Democrats as well. Millions of Americans voted for Trump in the 2016 presidential election because they felt the Democrats had provided them with an even worse presidential choice: Hillary Clinton — a Wall Street Democrat whose campaign was funded by Wall Street and hedge fund billionaires and whose household coffers had also been lined to the tune of millions of dollars for speeches she and her husband had delivered, mostly in secrecy, to the one percenters.