Despite Historically Low Interest Rates, Consumers Are Paying an Average of 14 Percent on Credit Card Debt 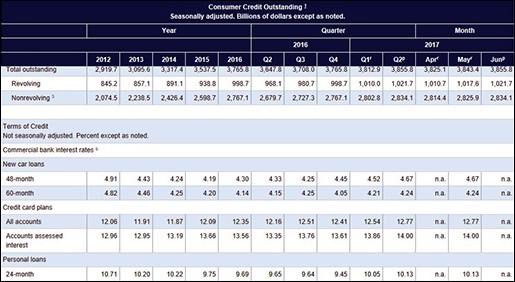 On August 7 the Federal Reserve released an updated report on consumer debt. It raises more questions about how the big Wall Street banks are making all those billions of dollars in profits.

Since 2012, the benchmark 10-year U.S. Treasury note has yielded below 2.5 percent for the majority of that period. But according to the Federal Reserve chart above, on all consumer credit card accounts assessed interest, the interest rate charged to consumers has moved from 12.96 percent in 2012 to 14 percent as of May 2017. (The 14 percent figure is defined as follows by the Fed: “The rate for accounts assessed interest is the annualized ratio of total finance charges at all reporting banks to the total average daily balances against which the finance charges were assessed (excludes accounts for which no finance charges were assessed).”

From 2012 to the end of the second quarter of 2017, total consumer debt has expanded from $2.9 trillion to $3.855 trillion on a seasonally adjusted basis, according to the latest Fed report.

One has to seriously question if the persistent subpar growth rate of 2 percent or less for the U.S. economy and the continuing closures of retail stores is directly related to the obscene interest rates being charged to U.S. consumers by the mega Wall Street banks that hold the majority of credit card debt. The 14 percent average rate blurs the fact that many consumers are being charged in excess of 20 percent on their credit cards. In a Town Hall speech in New York City on January 5, 2016, Senator Bernie Sanders had this to say about needed reforms to rein in Wall Street abuses:

“If we are going to create a financial system in this country that works for all Americans, we have got to stop financial institutions from ripping off the American people by charging sky-high interest rates and outrageous fees…

“It is wrong that millions of Americans are paying credit card interest rates of 20 or 30 percent.

“The Bible has a term for this practice. It’s called usury. And in ‘The Divine Comedy,’ Dante reserved a special place in Hell for those who charged people usurious interest rates.

Directly above the consumer debt graphic at the Federal Reserve’s web site is what appears to be the Fed’s official slogan. It reads: “The Federal Reserve, the central bank of the United States, provides the nation with a safe, flexible, and stable monetary and financial system.”

This slogan comes from the very institution that secretly funneled a cumulative $16 trillion in loans to Wall Street banks, hedge funds and foreign financial institutions from 2007 to 2010 — during the worst financial collapse since the Great Depression.  Many of the loans to the biggest Wall Street banks were made at near zero interest rates. No such mega gestures of charity were made to struggling Americans who had lost their jobs as a result of Wall Street corruption and hubris. The Fed fought for years in court to keep its secret back room deals from being revealed to the public.

As for providing the nation with a “safe, flexible, and stable” financial system, this is what the official report from the Financial Crisis Inquiry Commission found regarding the Fed’s oversight role in the leadup to the crisis:

“Despite the expressed view of many on Wall Street and in Washington that the crisis could not have been foreseen or avoided, there were warning signs. The tragedy was that they were ignored or discounted. There was an explosion in risky subprime lending and securitization, an unsustainable rise in housing prices, widespread reports of egregious and predatory lending practices, dramatic increases in household mortgage debt, and exponential growth in financial firms’ trading activities, unregulated derivatives, and short-term ‘repo’ lending markets, among many other red flags. Yet there was pervasive permissiveness; little meaningful action was taken to quell the threats in a timely manner.

“The prime example is the Federal Reserve’s pivotal failure to stem the flow of toxic mortgages, which it could have done by setting prudent mortgage-lending standards. The Federal Reserve was the one entity empowered to do so and it did not. The record of our examination is replete with evidence of other failures: financial institutions made, bought, and sold mortgage securities they never examined, did not care to examine, or knew to be defective; firms depended on tens of billions of dollars of borrowing that had to be renewed each and every night, secured by subprime mortgage securities; and major firms and investors blindly relied on credit rating agencies as their arbiters of risk. What else could one expect on a highway where there were neither speed limits nor neatly painted lines?”

The financial crisis from 2007 to 2010 was an epic failure of oversight by the Federal Reserve from which the nation has yet to recover. But that tragedy pales in comparison to the fact that absolutely nothing has been done as a result of that crisis to remove the Fed’s crony Wall Street blinders and make it publicly accountable as a watchdog agency. (See related articles below.)