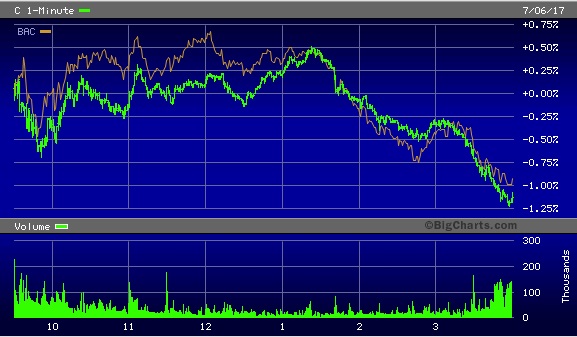 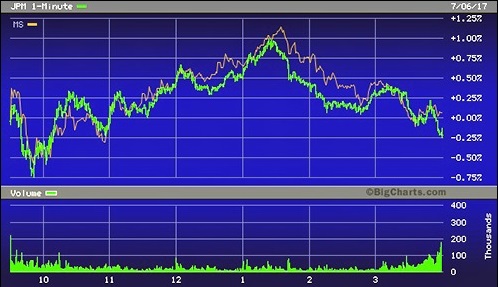 Sometimes a picture really is worth a thousand words. The charts above show how four of the largest Wall Street banks traded like clones of one another yesterday. Their share prices rallied at almost identical times and the rallies faded at almost identical times. The chart contrasting the trading pattern of JPMorgan Chase and Morgan Stanley is particularly interesting. JPMorgan’s Chase bank has thousands of retail commercial bank branches spread across the United States. Morgan Stanley, on the other hand, has approximately 17,000 retail stockbrokers, now known as financial advisors. What both firms have in common is that they are among the five banks in the country that control a monster pile of derivatives on Wall Street. Ditto for the other two banks illustrated above: Citigroup and Bank of America.

According to the most recent data from the Office of the Comptroller of the Currency (OCC), the regulator of national banks, as of March 31, 2017 the following five bank holding companies controlled the lion’s share of the derivatives market: Citigroup held $54.8 trillion in notional (face amount) of derivatives; JPMorgan Chase held $48.6 trillion; Goldman Sachs Group had $45.6 trillion; Bank of America held $35.8 trillion while Morgan Stanley sat atop $30.8 trillion. According to the OCC report, the top 25 bank holding companies controlled a total of $242.3 trillion in notional derivatives at the end of the first quarter of 2017, with these five bank holding companies accounting for 89 percent of that amount.

The Fed’s Comprehensive Capital Analysis and Review stress tests (CCAR), the results of which were announced on June 28, gave the green light to these mega Wall Street banks to eat away at their capital through monster share buybacks and increases in their dividends to shareholders. This effectively ignored the concentration of derivatives held by these five firms and their heavily intertwined connectivity that results from the obvious fact that they share many of the same counterparties to these derivative contracts. The reason these mega bank stocks trade like a herd in a stressed market environment is because these banks are a herd.

“The hubris of incompetent regulation of the behemoth Wall Street banks, which Congress not only failed to tame after the 2008 crash but allowed to grow much larger in terms of systemic risk, has now come home to roost. If these banks own up to losses and boost loan loss reserves for what is inevitably coming, their share prices will dive further. If they don’t, markets will assume they’re lying and guess at what their share price should be, potentially hurting them even more…”

On the morning of January 20, 2016, Citigroup, Morgan Stanley, Goldman Sachs and Bank of America all traded at new 12-month lows after blowing through tens of billions of dollars of equity capital in a six month span.

On June 27 of this year, Fed Chair Janet Yellen spoke at the British Academy in London and explained what the Fed looks for in its stress tests in terms of liquidity at these mega Wall Street banks. Yellen stated:

“So suppose there were a scare and depositors decided ‘we want our money, we’re worried that there’s something wrong in your bank.’ Well, having enough liquidity that you would be able to meet deposit outflows that could occur, let’s say over a 30-day period even if they were severe, we’ve put in place for systemic banks – internationally-active banks, liquidity requirements they hold in order of magnitude more liquid assets.”

A 30-day safety net for banks that trade like a herd for as long as a year in a declining market is no safety net at all. The Fed battled in the courts to keep from revealing that it had given secret emergency loans – at almost zero interest rates – that cumulatively totaled $16 trillion from 2007 into 2010 to the Wall Street banks and their foreign counterparties in the last financial crash.

Against this background, it’s clear that the Fed’s stress tests are not the product of childlike naiveté. It’s clear that the Fed’s backup plan is more massive, secret emergency lending if something goes wrong. That may be a great plan for the unreformed banks, their obscenely paid CEOs and their largest shareholders but it’s a devastating plan for a nation saddled with a $20 trillion national debt – a large part of which came from shoring up the U.S. economy the last time Wall Street went on a binge as the Fed waved pom poms from the sidelines.