OECD: World Is Still Locked in a “Low-Growth Trap” with Rising Inequality 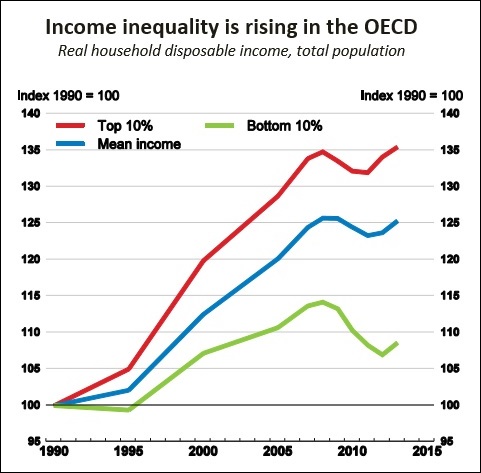 The Organization for Economic Cooperation and Development (OECD) just released its latest economic outlook which it sums up as “better but not good enough,” noting that, since the financial crisis of 2008, global growth remains “below past norms and below the pace needed to escape fully from the low-growth trap.” Projecting a modest pickup in global growth to 3.5 percent this year, the authors write:

“After many years of weak recovery, with global growth in 2016 at the lowest rate since 2009, some signs of improvement have begun to appear. Trade and manufacturing output growth have picked up from a very low level, helped by firmer domestic demand growth in Asia and Europe, and private sector confidence has strengthened. But policy uncertainty remains high, trust in government has diminished, wage growth is still weak, inequality persists, and imbalances and vulnerabilities remain in financial markets. Against this background, a modest pick-up in global GDP growth is projected this year to 3½ per cent, with an upturn in trade and investment intensity and improving outcomes in several major commodity producers.”

The longer-term outlook is further clouded by high debt levels in faster growing economies and political gridlock in Washington. The authors explain:

“The stronger policy-driven demand growth in China and many other Asian economies that is helping to underpin the modest global upturn projected in 2017-18 cannot be sustained indefinitely. This reflects already high debt levels in some countries and the need, especially in China, for rebalancing the economy away from stimulus-driven investment growth towards consumption. The extent of US fiscal support in 2018 also remains very uncertain, given the challenges being experienced in reaching political agreement about policy choices.”

Catherine Mann, OECD’s Chief Economist, noted on her blog in conjunction with the newly released data that “when viewed in per capita terms, GDP growth for the OECD is even further from past norms and income inequality continues to rise.”

The country-by-country analysis of the OECD report delves further into the labor force divide in the U.S. The researchers found the following:

“The United States is an important country for international trade, with large multinational enterprises creating a complex web of global supply chains. This has boosted competition and productivity, and brought benefits to consumers. Nonetheless, some workers and communities have been hurt by trade and technology developments. While trade and technology facilitate new job gains, the process of matching people who have lost jobs to the new employment opportunities can be slow. Individuals with lower levels of educational attainment are at a greater risk of dropping out of the labour force completely, contributing to persistent unemployment and poverty in affected areas. The United States spends relatively little on labour market programmes, such as trade adjustment assistance, that help people who have lost their jobs acquire different skills and find new career opportunities. In some states, community colleges are effective in helping individuals. Expanding the eligibility of the earned income tax credit to childless workers would also help address poverty and encourage greater labour force attachment.” 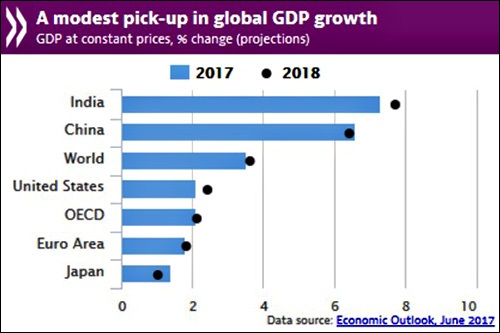