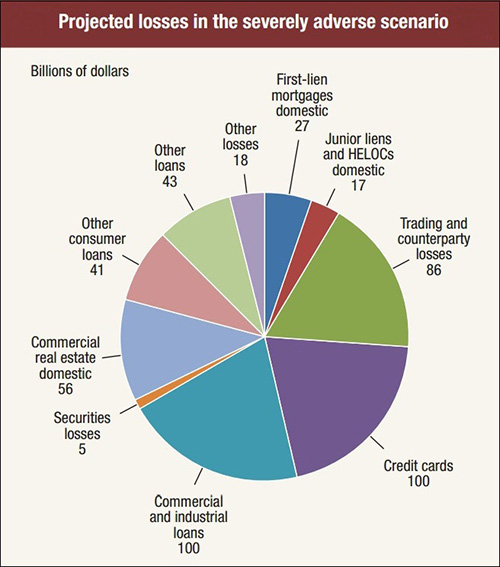 There are some very serious undercurrents at work in the U.S. financial markets but they are getting short shrift on the front pages of newspapers as the President’s travails dominate the news. That’s working out well for Wall Street, which wants to keep the public slumbering as long as possible in hopes of gutting more financial regulations.

One of those serious undercurrents is the amount of risk being held by the biggest banks in the country. According to the Federal Reserve’s release of its Supervisory Stress Test, of the 34 Bank Holding Companies that are subject to its review, under a “severely adverse scenario,” meaning a deep recession, losses for the combined group are projected to be $493 billion.

Not to put too fine a point on it but that’s just 34 banks out of a total of 5,856 FDIC insured banks in the U.S. according to the FDIC’s March 31, 2017 database. The federal deposit insurance fund as of March 31, 2017 has on hand only $84.9 billion to bail out all banks that go under. That means that if there is, once again, contagion among Wall Street mega banks because they’ve all crowded into toxic debt with derivatives written on top, the taxpayer will once again be dragged kicking and screaming by Wall Street cronies in Congress to bail out the reckless bad boys on Wall Street and their multi-million dollar bonuses — which are somehow sacrosanct even when the recipients have put the nation in financial crisis.

The chart above from the Fed’s Supervisory Stress Test shows just how dangerous and irrational the U.S. financial system has become. The traditional role of banks to lend money to commerce and the consumer to keep the economy expanding and innovating and creating good jobs for Americans has been co-opted by Wall Street’s desire to trade and speculate and, eventually, blow itself up again.

The numbers in the chart above represent billions of dollars of projected losses. The losses from trading events and counterparty losses on derivatives are projected at $86 billion versus $100 billion in projected losses on commercial and industrial loans – the core function of a bank.

Unfortunately, the public cannot trust the projected trading and counterparty losses from the Fed. We know that from the experience of 2008 when the Fed turned out to be the dumb tourist when it came to anticipating the hundreds of billions of dollars in derivative losses hiding in the dark corners of Citigroup and AIG and Lehman Brothers — and Goldman Sachs had AIG not been bailed out. We also know from our previous reporting that the Fed is currently standing down when it comes to reining in derivative risks escalating at the biggest Wall Street banks. (See our related articles below.)

There’s also something specious about how the Fed calculated this $86 billion anticipated trading and counterparty loss. It says “these projected losses are based on the trading positions and counterparty exposures held by these firms on a single date (January 3, 2017) and could have differed if they had been based on a different date.” Why wouldn’t the Fed project losses for a dozen or so different dates and then take the average? January 1 is a holiday and January 3 is just two days into the new trading year when banks are unlikely to have had time to have taken on significant risks.

We reported in March of last year on the concentrated risk for derivative contagion. We wrote:

“…derivatives remain dangerously concentrated, with Citigroup, JPMorgan Chase, Goldman Sachs, Bank of America, and Morgan Stanley holding $231 trillion notional amount of derivatives out of a total of $247 trillion for the top 25 holding companies.

“In the latest report, the OCC [Office of Comptroller of the Currency] attempts to put a happy spin on the fact that credit derivatives have declined to just $7 trillion as of December 31, 2015. But the question the OCC should be asking is who could possibly be a guarantor of $7 trillion in credit derivative bets?…The only conclusion to draw is that Wall Street banks are counterparties to each other on these bets (as the Office of Financial Research has suggested) and/or there is another insurance company, global bank or sucker corporation out there somewhere that is sitting naked with no money to pay off these bets.

“The reason that both the left and right are bemoaning the lack of meaningful financial reform is because it’s a legitimate and urgent matter. The ratings agencies are still taking pay from Wall Street to dole out their ratings. Wall Street banks are still operating unregulated opaque quasi stock exchanges known as dark pools inside their firms. CEO pay is still obscene and incentivized to crime with JPMorgan giving its CEO Jamie Dimon a 35 percent pay boost to $27 million for 2015 after the bank received three criminal felony charges over the two prior years. Cartel activity has now become a business model with global banks, including U.S. banks, charged with colluding on rigging Libor interest rates and rigging foreign currency markets while one trader joked in a chat room that “If you ain’t cheating, you ain’t trying.”

Wall Street is no doubt snickering to itself that Trump is taking media focus away from the serial crimes in the U.S. financial industry. The public needs to demand that major media restore coverage of these vital issues.

Why Is MetLife Tanking in Tandem With Wall Street Banks?