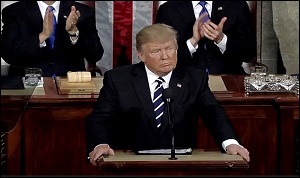 “Donald Trump Is Not Well,” is the headline over an OpEd at the Washington Post this morning by Mika Brzezinski and Joe Scarborough, hosts of the MSNBC show, Morning Joe. The OpEd comes in response to a sexist rant against Mika Brzezinski by the President of the United States yesterday on his Twitter page. Invoking for the second time his fixation about women and blood, the President called Brzezinski “low I.Q. Crazy Mika” and said that at a prior visit to his Mar-a-Lago residence in Palm Beach she was “bleeding badly from a face-lift.” (The hosts called the face-lift allegation a lie.)

Adding some background evidence to their claim that the President “is not well,” the MSNBC hosts wrote:

“From his menstruation musings about Megyn Kelly, to his fat-shaming treatment of a former Miss Universe, to his braggadocio claims about grabbing women’s genitalia, the 45th president is setting the poorest of standards for our children.”

This is not the first time we’ve heard someone claim that the President’s behavior is “not normal.” Just a month before the election, Trump had to admit and apologize for a video showing he had said the following about his treatment of women: “And when you’re a star, they let you do it. You can do anything — grab them by the p—-.” Shortly thereafter, First Lady Michelle Obama gave a speech in New Hampshire where she offered this about Presidential Candidate Trump:

“The fact is that in this election, we have a candidate for president of the United States who, over the course of his lifetime and the course of this campaign, has said things about women that are so shocking, so demeaning that I simply will not repeat anything here today. And last week, we saw this candidate actually bragging about sexually assaulting women. And I can’t believe that I’m saying that a candidate for president of the United States has bragged about sexually assaulting women…

“This wasn’t just locker-room banter. This was a powerful individual speaking freely and openly about sexually predatory behavior, and actually bragging about kissing and groping women, using language so obscene that many of us were worried about our children hearing it when we turn on the TV…

“But, New Hampshire, be clear: this is not normal. This is not politics as usual. This is disgraceful. It is intolerable. And it doesn’t matter what party you belong to – Democrat, Republican, independent – no woman deserves to be treated this way.”

As women on Wall Street have learned so well over the years, when a sexist, predatory male sits in the boss’s chair, he will have no difficulty finding some female sycophant in his employ who is willing to attempt to justify his behavior as not only normal but necessary. Enter stage right Sarah Huckabee Sanders, the President’s Deputy Press Secretary, who had this to say about Trump’s attack on Brzezinski: “Look, the American people elected a fighter. They didn’t elect somebody to sit back and do nothing.”

The President’s behavior apparently can’t be reined in by his advisors or his closest family members, despite First Lady Melania Trump’s pledged campaign against cyberbullying and his daughter, Ivanka’s, promise to work to empower women.

The Republican Party now has only three choices: allow this President to continue to demean women and humiliate the United States in the eyes of the world; give him an ultimatum to conduct himself in a dignified manner befitting the Oval Office; or send him packing before he does something so humiliating that there is no ability for the party to redeem itself.

Has America Fallen? Krugman and Europeans Raise the Question.

The Unthinkable is Happening to America

Report: Measured for Social Progress, U.S. Is a Second-Tier Nation