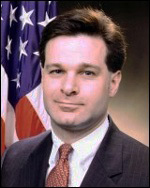 President Donald Trump announced his nomination of Christopher Wray to take over James Comey’s job as Director of the FBI in a Tweet on June 7, the day before Comey’s much anticipated testimony before the Senate Intelligence Committee. In the Tweet, Trump called Wray a “man of impeccable credentials,” which, undoubtedly, he is. He is also a man with a maze of conflicts of interests.

It appears that someone has tried to scrub some of those conflicts from the official web site of the Justice Department. For example, try this Justice Department press release link, which now turns up a dead page.

Fortunately for our readers, Google has cached the press release which is dated February 19, 2004. The opening sentence includes all three names making headlines today – Comey, Wray and Robert Mueller, the newly appointed Special Counsel who will investigate the Trump campaign’s ties to Russia and the firing by President Trump of James Comey as FBI Director. At the time of this press release, the three men were attached at the hip as part of George W. Bush’s Corporate Fraud Taskforce. All three men are quoted in this press release, as follows:

“This indictment marks an important milestone in the life of the President’s Corporate Fraud Task Force,’ said Deputy Attorney General James B. Comey, who heads the Task Force. ‘The indictment alleges that Jeffrey Skilling and other Enron executives concocted a massive, complex scheme to give shareholders and the investing public the false appearance of financial strength and security at a time when Enron was, in fact, failing. Our investigators were able to cut through the maze of paperwork and financial trickery to get to the bottom of the scheme and charge Skilling, once the top executive at Enron, with fraud and other crimes that contributed to Enron’s collapse.’

“The indictment of Enron’s CEO shows that we will follow the evidence wherever it leads — even to the top of the corporate ladder,’ said Assistant Attorney General Christopher Wray of the Criminal Division. ‘No corporate executive — not even the CEO — is above the law. The Department of Justice and our Task Force partners will work tirelessly to hold accountable all those who participate in corporate fraud, no matter how devious the scheme, and no matter how highly placed the perpetrators.’

“The FBI continues to investigate allegations of fraud, particularly with regard to corporations that victimize innocent investors,’ said FBI Director Robert Mueller. “The Enron’s Task Force’s probe and today’s indictment represents both a substantial step for justice and strong continued action on the part of the FBI’s Corporate Fraud Initiative.’ ”

Yes, Enron was heavily prosecuted by this Taskforce. But the Wall Street firms that aided and abetted Enron’s frauds were handled far more gently — in no small part because of the deftness of their high-paid corporate lawyers.

Why would Donald Trump be comfortable with Wray as an FBI Director when he had previously worked closely as a colleague to Comey? Why is the Justice Department comfortable naming Mueller as the Special Counsel to investigate the Trump-Russia matter when his law firm, WilmerHale, is representing Trump’s daughter, Ivanka, and her husband, Jared Kushner. (Kushner is considered a person of interest to the FBI for his conversations with a Russian banker and Russian Ambassador.)

Wray is currently employed as a partner at the corporate law firm King & Spalding which has represented Wall Street heavyweights like Citigroup, Goldman Sachs and JPMorgan Chase. Reuters is reporting that King & Spalding also has “previous ties to Trump. Bobby Burchfield, a partner in its Washington office, serves as ethics adviser for the trust set up in January to isolate Trump from the day-to-day operations of the Trump business organization. The agreement has been criticized by some ethics experts as inadequate.”

On top of that pile of conflicts, Kenneth McCallion, a former federal prosecutor, writes the following at USA Today:

“The most troubling issue that Wray may face is the fact that his law firm — King & Spalding — represents Rosneft and Gazprom, two of Russia’s largest state-controlled oil companies.

“Rosneft was prominently mentioned in the now infamous 35-page dossier prepared by former British MI6 agent Christopher Steele. The dossier claims that the CEO of Rosneft, Igor Sechin, offered candidate Donald Trump, through Trump’s campaign manager Carter Page, a 19% stake in the company in exchange for lifting U.S. sanctions on Russia. The dossier claims that the offer was made in July while Page was in Moscow.”

There are dozens of career employees at the Justice Department and FBI and U.S. Attorney offices around the country who could have been tapped for the Special Counsel and FBI Director posts. Instead, the revolving door between corporate law firms representing the serially corrupt Wall Street firms continues to send its partners to high law enforcement posts in our Federal government.