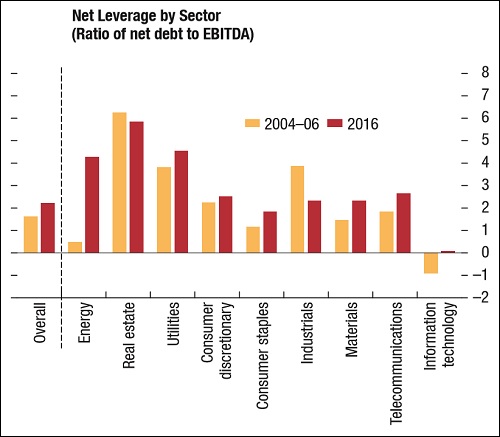 As U.S. equity markets continue to price to perfection a grab bag of promised corporate giveaways from their Best Forever Friend, President Donald Trump, a group of researchers at the International Monetary Fund (IMF) had the temerity to ask last month – what could possibly go wrong.

In their April 2017 “Global Financial Stability Report,” IMF researchers methodically pare back the rosy lenses of the U.S. equity market and focus on the warning signs in the U.S. corporate debt market. Two particular findings have the power to potentially jolt the equity markets out of their euphoric stupor. The researchers note:

“The [U.S.] corporate sector has tended to favor debt financing, with $7.8 trillion in debt and other liabilities added since 2010…” [Italics added.]

“The number of [U.S.] firms with very low interest coverage ratios—a common signal of distress—is already high: currently, firms accounting for 10 percent of corporate assets appear unable to meet interest expenses out of current earnings. This figure doubles to 20 percent of corporate assets when considering firms that have slightly higher earnings cover for interest payments, and rises to 22 percent under the assumed interest rate rise. The stark rise in the number of challenged firms has been mostly concentrated in the energy sector, partly as a result of oil price volatility over the past few years. But the proportion of challenged firms has broadened across such other industries as real estate and utilities. Together, these three industries currently account for about half of firms struggling to meet debt service obligations and higher borrowing costs.”

The report acknowledges that equity markets “have taken a relatively benign view” of the downside risks and warns that there could be a “swift repricing of risks in the event of policy disappointment.”

As for the windfall from President Trump’s promised slashing of the corporate tax rate, the IMF researchers have this to say:

“While positive effects of tax stimulus on cash flow could be considerable, they would be insufficient for firms in a number of cash-constrained sectors to finance increased capital spending. These sectors— energy, utilities, and real estate—are particularly important as they have contributed to nearly half of overall capital spending among S&P 500 firms over the past few years. The cash flow boost from a cut to the statutory tax rate may be insufficient to spur the nearly $140 billion needed to boost capital expenditure to the level prevailing before 2000. Adding in changes to tax treatments of interest expense and capital expenditures, along with repatriation, would attenuate—but likely not eliminate—financing needs for these sectors.”

The researchers also express the very legitimate concern that the President’s tax reforms may result in greater financial risk taking that could lead to financial instability. The researchers note:

“Perhaps more important, cash flow from tax reforms may accrue mainly to sectors that have engaged in substantial financial risk taking. Such risk taking is associated with intermittent large destabilizing swings in the financial system over the past few decades. It has averaged $940 billion a year over the past three years for S&P 500 firms, or more than half of free corporate cash flow. At the sectoral level, such spending has been strongest in the health care and information technology sectors—where purchases of financial assets, mergers and acquisitions, and net payouts have been capturing more than half of free resources since 2012—amounting collectively to nearly $500 billion a year.”

This would come at a very inopportune time. The IMF notes the following existing conditions in the U.S.:

“Corporate credit fundamentals have started to weaken, creating conditions that have historically preceded a credit cycle downturn. Asset quality—measured, for example, by the share of deals with weaker covenants—has deteriorated. At the same time, a rising share of rating downgrades suggests rising credit risks in a number of industries, including energy and related firms in the context of oil price adjustments and also in capital goods and health care. Also consistent with this late stage in the credit cycle, corporate sector leverage has risen to elevated levels.”

Another concern according to the IMF is that the average interest coverage ratio, which measures the ability for a corporation’s current earnings to cover its interest expenses – has shown a sharp drop over the past two years. The researchers write that “earnings have dropped to less than six times interest expense, close to the weakest multiple since the onset of the global financial crisis.” The report notes further that, historically, “deterioration of the interest coverage ratio corresponds with eventual widening in credit spreads for risky corporate debt.”

The prudent and common sense concerns and warnings expressed in the IMF report stand in contrast to what happened yesterday in U.S. markets. The Chicago Board Option Exchange Volatility Index (VIX), known as the “fear gauge,” closed at a 23-year low yesterday.

The persistent goldilocks readings from the VIX have caused some market veterans to question if the Index is broken or skewed by various market players. Should that be the case and there is a “swift repricing of risks” as the IMF cautions could happen, President Trump may find his job a lot harder than he ever imagined – even with all those Goldman Sachs guys in tow.