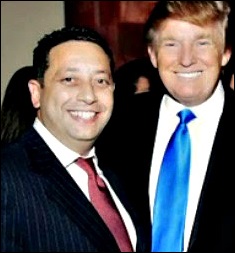 Six days after Zembla, a Dutch public broadcasting program, aired an investigation of U.S. President Donald Trump’s business ties to Russian oligarchs and mobsters, Trump fired the man in possession of a great many more details on that matter: FBI Director James Comey. Next, Trump announced that his law firm, Morgan, Lewis & Bockius, was providing a “certified” letter stating that he had no business interests in Russia. (That law firm, as ABC News was quick to point out, was itself named “Russia Law Firm of the Year” in 2016 by Chambers & Partners.)

The Morgan, Lewis & Bockius letter was dismissed as meaningless by multiple tax experts since Trump could easily have investments with Russian partnerships and offshore entities. The letter pertained only to investments in which Trump is “sole or principal owner.” These omitted minority partnership entanglements are precisely what the Dutch documentary explored.

From last Tuesday evening, when the news first broke that President Donald Trump had fired Comey, CNN has called in more than a dozen experts on everything from constitutional law to national security to Watergate to parse each utterance from the President in his Tweets or TV news interviews on the Comey matter. This mind-numbing, week-long repetition resulted in absolutely nothing that one could call substantive in terms of advancing the American public’s knowledge of the President’s longstanding and labyrinthine ties to Russian oligarchs and mobsters. In fact, it has clouded the real question that the Congressional Intelligence Committees and the FBI should be asking.

The critical question is not whether Trump campaign associates colluded with Russia in the 2016 presidential election. That’s an important peripheral question but pales in comparison to the overarching question, which is: does Donald Trump have a long term business history with Russian criminal elements which renders him a national security risk to the United States.

On May 3, Dutch public television drilled down to this core question in a breathtaking documentary titled: The Dubious Friends of Donald Trump: the Russians. An economic investigator, James Henry, who has looked deeply into Trump’s Russian ties, is interviewed in the documentary. According to Henry, since Donald Trump’s bankruptcies in the 1990s, Trump has become dependent on “shady” cash flows. “The only way that he was able to finance his resurrection after 2000,” says Henry, “was a torrent of money flowing out of Russia and former Soviet Union countries like Kazakhstan. The investors that he got at that point were looking for safe havens, or opportunities to launder money that were proceeds from basically criminal enterprises.”

Trump biographer Michael D’Antonio is also quoted in the documentary on how Trump parses his denial of business ties within Russia. D’Antonio remarks on screen: “The thing to notice when Donald Trump talks about his relationship with Russia is that he always says I have no business in Russia. He doesn’t say that Russians have no business with me.”

The documentary traces Trump’s history with a company known as Bayrock, which was behind the development of Trump SoHo, a 46-floor building of luxury apartments in lower Manhattan in which Trump held a minority ownership interest. Henry has this to say about Bayrock:

“I think in the case of Bayrock, we have a company that is led by people who have extremely shadowy backgrounds and profiles.” Rather than defamatory conjecture, Henry has made perhaps the understatement of all time. One of the key players in Bayrock, a man variously known as Felix Sater a/k/a Felix Satter, has been profiled multiple times in the U.S. media for his dodgy Russian background; for serving time in prison; for his involvement in a $40 million stock fraud tied to New York crime families; and for functioning secretly as a mole for more than a decade for the FBI to avoid jail time for the stock fraud scheme. Equally stunning, Sater’s mole years were spent simultaneously working to develop condo and hotel deals for Trump.

Sater’s bizarre background and Trump ties have been profiled as recently as 2016 in Forbes; and in March 2017 in the Los Angeles Times among numerous others.

The Dutch documentary is, however, the first to turn up the heat by connecting the myriad dots on television. An attorney, Fred Oberlander, who has brought a lawsuit in New York that resulted in unsealing many of the government’s secret documents pertaining to Sater’s criminal past, said this on screen in the documentary about Sater’s involvement with Bayrock and Trump:

Later in the program, Oberlander adds the following:

“If I can show that Donald Trump at some point knew the truth about the crimes of Bayrock, or even some of them, and kept on helping Bayrock’s businesses, while knowing that it has been engaged and continued to engage in crime, then it’s goodbye, goodluck.”

Further evidence that Congressional intelligence committees were interested in Trump’s ties to Bayrock and Sater came on March 20 of this year when the House Intelligence Committee took testimony from then FBI Director James Comey. During that hearing, Congressman Eric Swalwell had the following exchange with Comey:

Swalwell: Director, are you aware of Felix Sater, a former Soviet official and adviser to the Trump Organization?

Swalwell: And Director, outside of Mr. Sater’s relationship with the Trump Organization, are you aware that the FBI knew of Mr. Sater because of a $40 million stock fraud case that was prosecuted by the federal government?