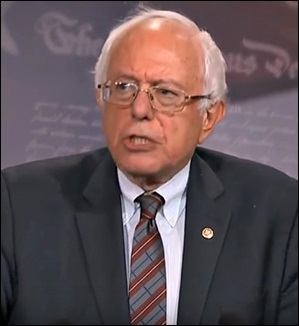 It became clear yesterday why President Donald Trump needed thousands of miles between himself and Washington D.C. when his administration dropped its budget proposal on the American people. It immediately drew sharply negative reactions from both sides of the aisle and outright ridicule from mainstream media.

Max Ehrenfreund, writing for the Washington Post, said the promise that the Trump budget would balance federal finances in a decade was based on “vague savings and unspecified sources of new revenue” consisting of over $2 trillion in “mystery money.”

Anger among Democratic leaders over the budget’s attack on Americans that are least able to sustain more financial pain boiled over on Capitol Hill yesterday. Senator Bernie Sanders, the Ranking Member of the Senate Budget Committee and two of his colleagues on the Committee, Senators Debbie Stabenow and Jeff Merkley, joined with Senate Minority Leader Chuck Schumer at a press conference to assail the brutal cuts to programs for rural America, the middle class and working poor.

Just hours before President Trump was to meet with the Pope at the Vatican, Senator Sanders called Trump’s budget “immoral.” Sanders said:

“What this budget amounts to is an unprecedented transfer of the United States from the middle class and working families to the very, very wealthiest people in this country. Listen to this: by repealing the estate tax, the Walton family worth $130 billion will get up to a $53 billion tax break at the same time that this budget will drive children off of the children’s health insurance program; deny millions of people the health care they desperately need; make it harder for working class kids to go to college; slash environmental protections.

“So what we are seeing is unprecedented tax breaks for the people who don’t need it and devastating cuts for programs that the middle class, working families and lower income people do need.

Senators Stabenow and Merkley said the budget proposal would be devastating to rural America – ironically a geographic area that voted heavily for Trump. Merkley was strident in his assessment, stating:

“This is not an America first budget, this is a billionaires first budget. And it’s a rural America last budget. Rural development cut 30 percent. Rural business services wiped out. Rural rental housing diminished. Rural transportation – affected profoundly. Payment in lieu of taxes – so important to those of us in the West who have large amounts of Federal land – decreased. And, of course, CDBG [Community Development Block Grant] and HOME which are used flexibly by our rural communities to take on some of their worst and most challenging problems. And even rural postal service threatened by a $46 billion cut. And then throw in the airports; throw in the ag budget – the things that my colleague from Michigan has mentioned. It’s a nightmare for rural America and a nightmare for working Americans.”

Many Republicans, mindful of the midterm elections next year, also quickly distanced themselves from the draconian cuts outlined in the budget.