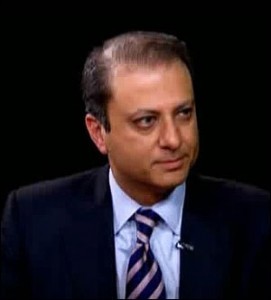 The narrative of Preet Bharara as a crusading crime fighter has gotten a big boost from the Editorial Board of the New York Times in a glowing editorial in today’s print edition. Bharara was, until this past weekend, the U.S. Attorney for the Southern District of New York, Wall Street’s stomping ground. Bharara Tweeted on Saturday that he had been “fired” by the Trump administration.

The Times’ editorial headline in its digital edition has to be bringing howls this morning from Wall Street veterans and corporate crime watchers. The Times is asking its readers to believe that Bharara was a “Prosecutor Who Knew How to Drain a Swamp.” That’s fake news at its finest. Despite Jamie Dimon, CEO of JPMorgan Chase, Lloyd Blankfein, CEO of Goldman Sachs, and Michael Corbat, CEO of Citigroup, presiding over an unprecedented series of frauds upon the investing public at their banks, these men remain firmly entrenched as overpaid titans in the impenetrable toxic muck of the Wall Street Swamp.

We’ll get back shortly to Bharara’s tenure in the financial crime capitol of the world, but first some necessary background on the New York Times itself.

The Times has a new advertising slogan. It goes like this: “Truth. It’s hard to find. But easier with 1000+ journalists looking. Subscribe to The Times.” Unfortunately, when it comes to New York’s biggest and richest hometown industry known as Wall Street, those 1,000 journalists regularly have dull pencils and fogged lenses. (See related articles below.) Even worse, the Editorial Board at the Times has repeatedly served as a propagandist for the serial Wall Street ruses to fleece the public.

It was the Editorial Board of the Times that played the role of Head Majorette when Sandy Weill needed support for his self-serving plan to repeal the Glass-Steagall Act, allowing Wall Street investments banks to merge with commercial banks holding federally-insured deposits in order to make wild gambles for the house while putting taxpayers on the hook for the losses. John Reed, Weill’s partner in the plan, explained to Bill Moyers’in 2012 the real motivation behind the scheme: “Sandy Weill. I mean, his whole life was to accumulate money. And he said, ‘John, we could be so rich.’ Being rich never crossed my mind as an objective value. I almost was embarrassed that somebody would say out loud. It might be happening but you wouldn’t want to say it.”

What were “unnecessary walls” to those great minds at the New York Times were actually all that stood between the small investor and an institutionalized wealth stripping scheme; between rock solid banks with adequate capital to collapsing banks all across Wall Street and a secret $16 trillion lifeline of loans from the Federal Reserve to prop up their insolvent carcasses; between a thriving U.S. economy and the greatest economic collapse since the Great Depression.

In 2012, after the U.S. national debt had skyrocketed from adding fiscal stimulus to counter the financial crash, after the U.S. housing market had been laid to waste, after millions of working families had lost their jobs and their homes and their belief in an honest America, the New York Times Editorial Board finally got around to a red-faced apology. It wrote:

“That year, we also said that the Glass-Steagall Act was one of two laws that ‘stifle commercial banks.’ The other was the McFadden-Douglas Act, which prevented banks from opening branches across the nation.

As for the preposterous assertion that Bharara knew how to drain a swamp, the facts on the ground are as follows:

Bharara took his office as U.S. Attorney in May 2009, in the midst of the Wall Street crash when the trail was still fresh to the crime scene on Wall Street. According to an investigation of the U.S. Justice Department, for whom Bharara works, by the PBS program, Frontline, that was aptly titled “The Untouchables,” the prevailing attitude was one of hands off. Martin Smith, producer of the segment, reported the following: “We spoke to a couple of sources from within the Criminal Division, and they reported that when it came to Wall Street, there were no investigations going on. There were no subpoenas, no document reviews, no wiretaps.”

How could a prosecutor drain the Wall Street swamp when the key tools to root out criminal behavior have been banished when it comes to big shots on Wall Street.

Bharara was recommended for his U.S. Attorney post by Senator Chuck Schumer of New York, for whom he had worked as Chief Counsel on the Senate Judiciary Committee. According to attorneys Helen Davis Chaitman and Lance Gotthoffer in their riveting book on the ties between Wall Street powerhouse JPMorgan Chase and Ponzi schemer Bernie Madoff (JPMadoff: The Unholy Alliance Between America’s Biggest Bank and America’s Biggest Crook) “Senator Schumer was a frequent visitor to Madoff in his office in New York’s Lipstick Building.” The source of this information was Madoff employees. The fact was further confirmed in a 2014 interview with Madoff by Politico’s MJ Lee, indicating that Schumer paid personal visits to Madoff  to collect campaign contributions.

Chaitman and Gotthoffer ferret out other ties to Bharara and Schumer in their book, including the following:

Bharara agreed to a deferred prosecution agreement against JPMorgan Chase for their involvement in the Madoff fraud. He also allowed the family of Madoff client Jeffry Picower to keep billions of dollars that very likely grew out of the fraud.

The lawyer who represented the Picower family and estate with the U.S. Attorney’s office, William Zabel of Schulte Roth & Zabel, had also served on the Board of the Jeffry M. & Barbara Picower Foundation which was a major beneficiary of Madoff’s crimes, according to the Trustee of the Madoff victims’ fund, Irving Picard. While William Zabel was representing the Picower estate, his son, Richard Zabel, was the Chief of the Criminal Division of the U.S. Attorney’s office in the Southern District of New York, working under Preet Bharara. (According to reports, Richard Zabel recused himself from the Picower matter.)

Employees of Schulte Roth & Zabel have consistently been in the top ranks of donors to Senator Schumer.

There is little question that Jeffry Picower and his family were the largest beneficiaries of the Madoff fraud. They conceded as much by returning the full amount of principal that had been withdrawn from their accounts: $7.2 billion. Chaitman and Gotthoffer analyze that figure as follows in their book:

“Picower realized a net gain of $7.2 billion from his complicity with Madoff over a 25-year period. Although the Madoff Trustee has not revealed the information as to the precise dates on which Picower withdrew funds from Madoff, if we assume that the funds were drawn out evenly over 25 years, and we assume that Picower had simply invested his stolen money in U.S. Treasury Notes over a 25-year period, he would have tripled his money – giving him a profit from Madoff’s crimes of approximately $21 billion. Again, that’s assuming he did nothing with his money but invest in U.S. Treasury Notes.”

The New York Times is right about one thing. Truth really is hard to find – especially in New York. But it becomes even harder when the Times serves up heroes that don’t exist.