Facing Down Trump in Court: A 37-Year Old Hero Emerges 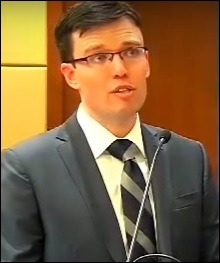 Students and teachers at Franklin High School in Seattle are walking a little taller and prouder this morning. One of their own, 37-year old Noah Purcell, the Solicitor General of the State of Washington, has in the span of less than a week, beat the most powerful man in the world – not once but twice. Purcell convinced District Court Judge James Robart in oral arguments on February 3 and all three judges sitting at the Ninth Circuit Court of Appeals in oral arguments on February 7 that President Donald Trump had illegally imposed an Executive Order banning immigrant entry into the United States from seven majority-Muslim countries.

The 29-page wide-ranging decision from the Ninth Circuit says as much about the power of Purcell to hone sweeping constitutional concepts into a finely-tuned legal argument as it does about the ability of Americans to successfully challenge a President determined to rule by Executive Order and intimidating Tweets.

When Purcell stepped to the podium on Friday, February 3, to make his oral arguments to Judge Robart, there was a faint hint of nervousness in his voice. But that quickly dissipated as he described the chaos and disruption of lives that was occurring as a result of the ill-conceived Executive Order. Not only had persons with valid visas been denied entry to the United States under the order, but persons who were Lawful Permanent Residents (LPRs) with green cards were denied re-entry when the order was first imposed. The government, he told the court, continued to flip-flop on exactly who was covered under its amorphous order.

Judge Robart was convinced by Purcell’s arguments and imposed a nationwide Temporary Restraining Order, blocking Trump’s order from taking effect while the case moved forward in his courtroom. The government quickly appealed the ruling to the Ninth Circuit Appellate Court. That’s when a large swath of America rose to its feet to confront the arrogance and unconstitutionality of the new President’s assertion that he could make rulings with a pen that were unreviewable by the courts; throw the innocent lives of teachers and students and traveling professors and tech employees with valid visas into chaos and inflict anxiety and fear into permanent residents in America. 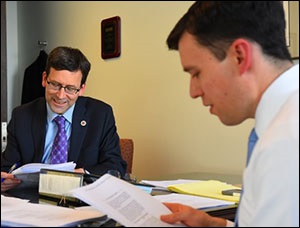 Purcell’s army began to form on the docket at the Ninth Circuit. More than a hundred companies filed an Amicus brief explaining how the Executive Order would disrupt their business and the lives of their employees. Among those companies were some of the most important technology companies in America – and the world: Google, Microsoft, Intel – who need to hire the best and the brightest, regardless of nationality, to keep America globally competitive.

Law professors and constitutional scholars filed arguments against the order. Nonprofits stepped forward with their own Amicus briefs. And the Attorneys General of 17 states and the District of Columbia backed up the arguments being made by the States of Washington and Minnesota in their own legal brief.

At the tender age of 37, Purcell has a formidable resume. He graduated magna cum laude from Harvard Law School, where he was an Editor of the Harvard Law Review. Next he clerked for former U.S. Supreme Court Justice David Souter and U.S. Court of Appeals Judge David Tatel of the D.C. Circuit. From 2009 to 2010, Purcell worked at the U.S. Department of Homeland Security’s Office of General Counsel in the areas of security and immigration. Prior to becoming Solicitor General to the State of Washington in 2013, Purcell worked for the corporate law firm, Perkins Coie, in their Litigation and Appellate practices.

Trump now faces a slippery slope if he elects to appeal. In an immediate Tweet following the decision, Trump used all caps, interpreted on the Internet as screaming, to state: “SEE YOU IN COURT, THE SECURITY OF OUR NATION IS AT STAKE!” This morning, Trump is back to upper and lower case, calling the Ninth Circuit’s action “A disgraceful decision!” It is considered really bad form for a sitting President of the United States to undermine confidence in the Judiciary. The decision of the Ninth Circuit judges was unanimous and one of the judges was a George W. Bush appointee.

Trump apparently missed reading one section of the Ninth Circuit’s decision. It specifically spelled out that the government had failed totally in making its case that the security of our nation was at stake. The Judges wrote:

“Despite the district court’s and our own repeated invitations to explain the urgent need for the Executive Order to be placed immediately into effect, the Government submitted no evidence to rebut the States’ argument that the district court’s order merely returned the nation temporarily to the position it has occupied for many previous years.

“The Government has pointed to no evidence that any alien from any of the countries named in the Order has perpetrated a terrorist attack in the United States.

“Rather than present evidence to explain the need for the Executive Order, the Government has taken the position that we must not review its decision at all…”

The Ninth Circuit mapped out the next steps for Trump. If he wants to file a motion for reconsideration or reconsideration en banc (before a majority of active circuit judges) he has to file it within 14 days of the decision. There is no guarantee that either request would be granted or that he would win if the case was reheard. Trump could try appealing to the U.S. Supreme Court, but it might decline to hear the case, leading to further embarrassment for Trump.

Because the Ninth Circuit unanimously agreed that the government failed to show any evidence suggesting an imminent threat to the United States to justify the Executive Order and because the matter has not been fully briefed and no discovery taken yet at the District Court level, the Supreme Court would be put in the untenable position of ruling in the dark if it accepted the case.

The path forward for Trump is uncertain. But one thing is quite clear. The new President, testing the expanse of his powers, never expected such a rapid and brilliantly constructed outpouring from the best legal minds in America. It sends a desperately-needed message of hope to the country that America can still come together when it really matters.