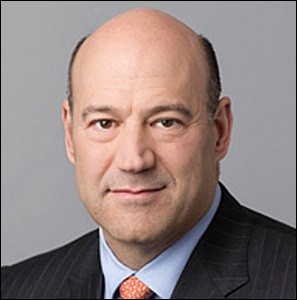 Gary Cohn, President and COO of Goldman Sachs, Was Appointed Director of the National Economic Council by Donald Trump

It was announced yesterday that Andrew Ceresney, the head of enforcement for the Securities and Exchange Commission (SEC) since 2013, would be returning to Debevoise & Plimpton as co-head of its litigation department – a nice promotion.

In 2009, one year into the biggest financial crash since the Great Depression, Debevoise & Plimpton’s Ceresney was lead author, with two of his colleagues, of a lengthy article for the American Criminal Law Review titled: Regulatory Investigations and the Credit Crisis: The Search for Villains. Debevoise & Plimpton, both then and now, represents some of the largest Wall Street banks that have serially engaged in fraudulent conduct against the investing public. The article seemed to be suggesting that prosecuting these banks would be too labor intensive and the facts too hard to prove because the deals were too complex. One paragraph reads as follows:

“The financial instruments and arrangements at issue in the credit crisis investigations are highly complex. In many of the areas being investigated, there simply may not have been intentional misconduct or criminally reckless behavior, but rather plain bad judgment on the part of market actors. Even in situations where there was wrongdoing, the time and resources required to mount investigations and the burden of proving intent to defraud are formidable obstacles for prosecutors and regulators to surmount, except in the most straightforward of fraud cases. In sum, in its search for credit-crisis villains, law enforcement may not be able to bring successful criminal or regulatory enforcement cases to punish wrongdoing, at least in connection with the most complicated areas of financial transactions involving the largest dollar amounts. At the very least, these investigations will be highly time and resource intensive…”

In 2013, when Mary Jo White, the then head of the litigation department at Debevoise was nominated by President Obama to Chair the SEC, she brought Ceresney along with her as co-head of enforcement. He took over as the full chief of enforcement in 2014. White has also recently departed the SEC but has not yet indicated where she will be working. (As we previously reported, White’s revolving door has been spinning in and out of Debevoise & Plimpton and government jobs for 36 years.)

During the tenure of White and Ceresney at the SEC, not one top executive of a Wall Street bank has been prosecuted and most cases have been settled without an admission of guilt. In a June 2, 2015 letter to White, Senator Elizabeth Warren blasted the SEC for failing to live up to its mandate. Warren wrote that “records show that in 520 settlements, SEC required admissions of guilt in only 19 cases – less than 4 percent.”

While White and Ceresney were in charge at the SEC, a 25-year veteran lawyer at the SEC, James Kidney, tendered his resignation and blasted the agency’s management in his retirement speech for policing “the broken windows on the street level” while ignoring the “penthouse floors.” Kidney noted in his speech that  “On the rare occasions when Enforcement does go to the penthouse, good manners are paramount. Tough enforcement – risky enforcement – is subject to extensive negotiation and weakening.”

As Ceresney spins out of the Washington side of the revolving door and heads back to representing Wall Street, Gary Cohn is spinning in the other direction. Cohn recently stepped down as the President of Goldman Sachs in order to become Trump’s Director of the National Economic Council.

The filing indicates that Cohn will exit all of his Goldman Sachs stock in order to comply with the “Ethics Guidance” it has received from the government. The convenient  removal of restrictions on Cohn’s stock awards together with the Goldman Sachs stock he already owns outright will add an estimated $300 million to Cohn’s liquid assets. If he places those liquidated stock proceeds in U.S. Treasury securities or qualifying mutual funds, he will be able to indefinitely defer capital gains taxes on the sale of the stock.

Cohn’s new role in helping to direct the economic destiny of the United States comes despite his former role in helping to collapse the economy of the United States. On Wednesday, April 13, 2011, following a two-year investigation, the U.S. Senate’s Permanent Subcommittee on Investigations released a 635-page report which included details on the deceitful and fraudulent role that Goldman Sachs played, among others, in the 2008 collapse of the financial system. Goldman Sachs is referenced 2,495 times in the report; Cohn is referenced 89 times.

The report shows how Goldman Sachs actually created products for the express purpose of reducing its own exposure to subprime mortgages while offloading the toxic instruments onto its own clients. One section of the report notes that Goldman’s net short position reached its peak on June 22, 2007 at $13.9 billion, nearly 40 percent larger than its net short in February of the same year. The report makes clear that Gary Cohn was calling the shots in this area, writing that by August 2007 “Goldman senior management again became concerned about the size of the Department’s net short position and its VAR levels, which had reached record levels. On August 21, 2007, Goldman’s Chief Operating Officer [and Co-President] Gary Cohn ordered the Mortgage Department to ‘get down now.’ ” This meant the traders should cover their shorts and lock in their profits.

Locking in his own profits appears to be what Gary Cohn just did – leaving one to question what’s ahead for the U.S. economy this time around.