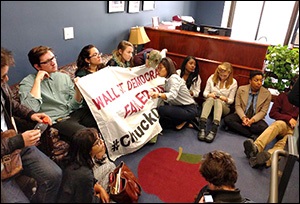 Something smelled unusually rotten in Trumpland when Democratic Senator from New York Chuck Schumer fell all over himself to endorse Donald Trump’s nominee, Vincent Viola, as Secretary of the Army. Viola has never served in battle and has spent the bulk of his adult life as an oil and gas futures trader. He became a billionaire from his stake in a high frequency trading firm, Virtu Financial, which he took public last year.

Multiple media outlets reported that Viola was a donor to Donald Trump’s campaign. According to Federal Election Commission (FEC) records, however, Viola’s only Federal election contribution in the past two years was a $5,000 donation to the CME Group Pac in December 2015.

Raising further questions about what is actually going on here, Virtu Financial’s CEO, Douglas Cifu, was a major donor to Hillary Clinton’s campaign, giving $10,000 to the Hillary Victory Fund on August 22, 2016. On the same date, Cifu gave $10,000 to the Democratic National Committee.

Even more eye-popping, Cifu and nine other executives of Virtu Financial gave donations ranging from $1,000 to the maximum $2700 to Senator Chuck Schumer’s re-election campaign. Those executives include Brian Palmer, the Global Head of Development and Joseph Molluso, Virtu’s Executive Vice President and Chief Financial Officer.

The FEC shows no employee of Virtu Financial making a donation to Donald Trump’s campaign.

The big donor at Virtu, CEO Douglas Cifu, was formerly a law partner at Paul, Weiss, Rifkind, Wharton & Garrison where he served as a member of its Management Committee. Paul Weiss has been heavily connected to Citigroup through the years, getting it off serial charges of fraud. Citigroup execs played a major role in the Bill Clinton and Barack Obama administrations. A series of WikiLeaks emails released this year showed that Michael Froman, a Citigroup executive at the time the bank was collapsing and receiving bailout assistance in 2008, led the cabinet staffing decisions for Obama’s first term as President.

Employees of Paul Weiss are listed at the Center for Responsive Politics as the number one donor to Schumer’s most recent campaign. Citigroup employees rank sixth.

As Secretary of the Army, Viola will oversee approximately 480,000 active duty Army service members and 550,000 Army reserve forces according to April data from the Defense Manpower Data Center.

Viola’s closest tie to the Army is the fact that he graduated from West Point four decades ago and served in the 101st Airborne Division at Fort Campbell, Kentucky for what the Wall Street Journal characterizes as “several years.”  Viola founded high-frequency trading firm Virtu Financial and currently serves as its Executive Chairman. Forbes currently lists Viola’s net worth at $1.76 billion.

On June 18, 2014, in a high frequency trading hearing by the Senate Banking Subcommittee on Securities, Insurance and Investment, Senator Elizabeth Warren compared what Virtu Financial does to the skimming scam in the movie Office Space. The hearing was almost completely blacked out by corporate media. Senator Warren had this to say about Virtu Financial at the hearing, the company that made Viola a billionaire:

In 2014, bestselling author Michael Lewis, who got his start as a bond salesman on Wall Street, released his book “Flash Boys,” explaining how high frequency trading had rigged U.S. stock markets. Lewis mentions Virtu Financial in the book as follows:

“In early 2013, one of the largest high-frequency traders, Virtu Financial, publicly boasted that in five and a half years of trading it had experienced just one day when it hadn’t made money, and that the loss was caused by ‘human error.’ In 2008, Dave Cummings, the CEO of a high-frequency trading firm called Tradebot, told university students that his firm had gone four years without a single day of trading losses. This sort of performance is possible only if you have a huge informational advantage.”

At the same Senate hearing where Senator Warren spoke about Virtu Financial, Andrew Brooks, the Head of U.S. Equity Trading for T. Rowe Price, also spoke. Brooks was a trader for 34 years. He had this to say about high frequency trading:

“The markets functioned pretty well prior to high frequency trading strategies being adopted. If 95 out of a hundred times that you’ve said you want to buy 100 shares of GE you cancel that trade – that expression of trading interest – before anybody can get to you, I sort of question the true intent of what you’re doing…So much of what a high frequency trading strategy might be is to act, to draw a reaction, and then to profit from your reaction. So they flank you, they pivot around you. They really have no intention of trading, they just sort of want to see what you’re going to do. And once they know what you’re gonna do, they can step in front of you…

“As investors, it’s rare, it’s rare that speed is important to us. Our average holding period is like three years. Why do I really care what’s going to happen in a nanosecond…And that speed advantage, if it destabilizes, it seems to us that that’s wrong. That’s not right and we ought to push back on that. Our view is we really ought to just slow down. Not walk away from technology but let’s take a deep breath here and really look at what we have…”

Hopefully, the Senate confirmation process will do just that as well: take a deep breath and really look at what we have going on with this nomination.