Italy’s Referendum Should Be a Warning to Donald Trump

Populist backlash, which has been running rampant on both sides of the Atlantic, just handed Italian Prime Minister Matteo Renzi his walking papers in a widely anticipated referendum vote. Renzi pushed for the referendum to reform the legislative system in Italy and said he would resign if it didn’t pass. Voters saw it as a power grab by Renzi and soundly defeated it with just under 60 percent voting against the measure. Under the terms of the referendum, Italy’s Senate would have shrunk from 315 members to 100 while the Senate’s right to hold a vote of no confidence in the government would have been severed. 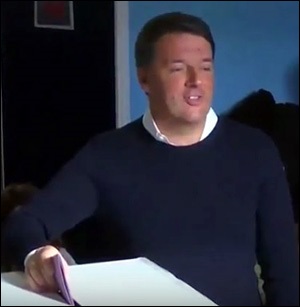 Much like Donald Trump’s appeal to the working class in America, Renzi took office in 2014 on an anti-establishment campaign. Ironically, or perhaps not, Renzi used the identical words as Trump, promising to clean out “the swamp.” The swamp in Italy includes the same cronyism, political pay-to-play and entrenched corruption that has Americans outraged and seeking drastic change from the status quo. Opposing voices who triumphed in yesterday’s referendum painted Renzi as too chummy with bankers and financiers, a narrative that is increasingly coming into sharp focus in Donald Trump’s Cabinet appointments.

Donald Trump’s Senior Counselor/Chief Strategist in the White House will be Steve Bannon, a previous Goldman Sachs banker and right-wing propaganda filmmaker. For one of the most powerful posts in government, the U.S. Treasury Secretary, Trump has tapped a former 17-year veteran of Goldman Sachs, Steven Mnuchin. An heiress to a family worth more than $5 billion, Betsy DeVos, was tapped by Trump for Education Secretary while billionaire investor and corporate raider Wilbur Ross has been named by Trump as his nominee for Commerce Secretary.

Trump, himself a billionaire, has attempted to justify his packing his administration with millionaires and billionaires by saying these people “know how to make money.” In many cases, however, the money has been made on the backs of the very working class to whom Trump made elaborate promises. While the U.S. legislative system does not function like European Parliaments, a President who makes grandiose promises to the little guy, then works on behalf of the one percent, would suffer a serious loss of credibility in U.S. opinion polls. This could result in backlash against Republicans in the 2018 midterm elections.

Trump also faces a banking reform problem not all that dissimilar to Renzi. Eight of Italy’s banks are experiencing distress. The FTSE Italia All-Share Banks Sector Index shown above is down 50 percent since the beginning of the year. Italy’s banks are estimated to have more than €360 billion of bad loans against equity of approximately €225 billion.

While the problems at U.S. banks rarely make front page news at corporate owned newspapers in America, there is a serious and growing problem with the largest Wall Street banks holding tens of trillions of dollars in derivatives at their taxpayer-backstopped insured depository units that hold the life savings of the little guy. Whom the counterparties are to these derivative gambles is a tightly-held secret. Thanks to an IMF report, however, we know that Germany’s Deutsche Bank, which has lost almost 40 percent of its market value this year, is deeply intertwined with Wall Street’s derivatives. (See related articles below.)

In a normal world and stock market, global banking stocks should have been hammered at the opening in New York this morning. As of mid-morning, Deutsche Bank is trading up 3 percent on the New York Stock Exchange with Wall Street banks like Goldman Sachs, JPMorgan Chase and Citigroup up approximately 2 percent. Typically, banks don’t like instability nor do they relish populism fervor and visions of pitchforks. What likely accounts for the cherry reaction this morning is the fact that multiple central banks around the world now have the right to levitate markets by making multi-billion-dollar purchases in the markets when things go south.

But as we found out in 2008, central bank intervention only works when things don’t all go south at the same time.

Is Deutsche Bank as Dangerous to Financial Stability as Citigroup Was in 2008?