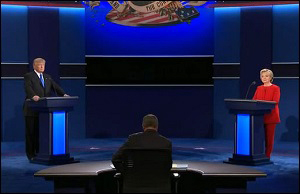 Yesterday, building on the momentum afforded her by a series of articles in the New York Times, Hillary Clinton asked the audience at a campaign stop in Toledo, Ohio: “What kind of genius loses a billion dollars in one year.” Clinton was referring to the New York Times revelation on Sunday that Donald Trump’s 1995 tax return showed a loss of $916 million. (See video clip below.)

If Hillary really wants to know what kind of genius can lose a billion dollars in one year or $6.2 billion in the case of traders at JPMorgan Chase, she should ask the bank’s CEO Jamie Dimon. The $6.2 billion London Whale loss at JPMorgan Chase is far more scintillating a feat since it involved wild derivative gambles in London in 2012 using the taxpayer-backstopped, insured savings deposits at the largest bank in the U.S. The U.S. Senate’s Permanent Subcommittee on Investigations conducted an in-depth investigation and report of the matter. The Chairman of the Subcommittee at the time, Senator Carl Levin, stated that JPMorgan “piled on risk, hid losses, disregarded risk limits, manipulated risk models, dodged oversight, and misinformed the public.”

In fact, New York City, where both Trump and the New York Times hail from, is filled to the brim with Wall Street geniuses who have wiped out hundreds of billions of dollars in shareholder equity or completely destroyed their Wall Street banks through unsound business models while reaping windfalls for themselves. Compared to these guys, Trump is a piker.

For the past three consecutive days the New York Times has deployed its front page as something akin to a Super Pac advertising medium to boost the campaign prospects of Hillary Clinton by sacking the business acumen of Donald Trump. (The editorial page of the New York Times has also twice endorsed Hillary Clinton for president, calling Trump “the worst nominee put forward by a major party in modern American history.”)

While we are certainly no fan of Donald Trump, we have to ask ourselves two essential questions: (1) why is the Times creating a gag-worthy, revisionist history of the scandal-plagued career of Hillary Clinton and (2) why has the Times allowed its hometown’s largest industry, Wall Street, to become a criminal enterprise right under its coddling nose, leading to the unprecedented transfer of wealth from the 99 percent across America to the pockets of the super wealthy of New York City and its environs.

Beginning with its big circulation Sunday edition on October 2, the Times leaked portions of Donald Trump’s 1995 tax returns (which were anonymously mailed to its reporter Susanne Craig). Just how legal or ethical it was to leak those tax documents has become the subject of debate. Trump has refused to release his tax returns, saying he is under audit. In its Sunday edition, the Times reported the following about Trump:

“…a $916 million loss in 1995 would have been large enough to wipe out more than $50 million a year in taxable income over 18 years. The $916 million loss certainly could have eliminated any federal income taxes Mr. Trump otherwise would have owed on the $50,000 to $100,000 he was paid for each episode of ‘The Apprentice,’ or the roughly $45 million he was paid between 1995 and 2009 when he was chairman or chief executive of the publicly traded company he created to assume ownership of his troubled Atlantic City casinos. Ordinary investors in the new company, meanwhile, saw the value of their shares plunge to 17 cents from $35.50, while scores of contractors went unpaid for work on Mr. Trump’s casinos and casino bondholders received pennies on the dollar.”

When Trump took his Trump Hotels & Casino Resorts public in 1995, it raised $140 million from the public. It’s true that shareholders lost approximately 90 cents on the dollar as a result of his bankruptcy. But those losses are chump change in comparison to the geniuses on Wall Street.

In 1998 Sandy Weill and John Reed merged the FDIC-insured Citibank with Salomon Smith Barney, an investment bank and brokerage firm, and insurance companies controlled by Travelers Group to create the global behemoth known as Citigroup. The duo initially served as Co-Chairmen and Co-CEOs. At the time, the deal violated the Glass-Steagall Act, the Depression era law which barred firms primarily engaged with underwriting securities to affiliate with insured banks.

The Bill Clinton administration would obligingly repeal the Glass-Steagall Act the year after the Citigroup merger and Clinton’s Treasury Secretary, Robert Rubin, would promptly take a seat on Citigroup’s Board, pulling down $126 million in compensation over the next decade.

According to the Center for Responsive Politics, Citigroup ranks as one of the top five donors to Hillary Clinton over the course of her career in public office. JPMorgan Chase and Goldman Sachs also register in the top five. (The monies come from employees and/or family members or PACs of the firms, not the corporation itself.) Citigroup has also paid the Clintons massive sums in speaking fees over the years and provided a $1.995 million mortgage to allow the Clintons to buy their Washington, D.C. residence at the end of Bill Clinton’s presidency – a time when Hillary Clinton says the couple was “dead broke.” Citigroup has also committed $5.5 million to the Clinton Global Initiative, a controversial charity run by the Clintons.

The Citigroup banking model became known variously as “universal banking” or the “financial supermarket” and finally, after the collapse of Wall Street and massive taxpayer bailout in 2008, the “too-big-to-fail” banking model.

The New York Times editorial page stridently advocated for the repeal of the Glass-Steagall Act on behalf of its hometown geniuses on Wall Street. In 1988 it wrote: “Few economic historians now find the logic behind Glass-Steagall persuasive.” In 1990 it said that the idea that “banks and stocks were a dangerous mixture” “makes little sense now.” In the same year it added that Glass-Steagall was among the laws that “stifle commercial banks.”

On April 8, 1998 the editorial page gushed over the Citigroup deal, writing:

In 2008 Citigroup collapsed, receiving the largest bailout in U.S. history, the majority of which was kept secret for years from the American people. Once the full details came to light, Citigroup had received $45 billion in an equity infusion from taxpayers; over $300 billion in asset guarantees from taxpayers; and more than $2.5 trillion in secret, cumulative, below market-rate loans from the Federal Reserve from 2007 to 2010.

Sandy Weill walked away with more than a billion dollars in total compensation; Reed walked away a multi-multi-millionaire. Shareholders have lost approximately 90 percent of the value of the stock from the year before the crash.

Since the Wall Street crash in 2008, writers at the New York Times have repeatedly misstated the role that repealing Glass-Steagall played in the collapse. And despite repeated requests from Wall Street On Parade to the Editor, Publisher and Public Editor of the New York Times to correct the critically wrong information, they have allowed the misinformation to stand, suggesting they are engaging in a propaganda campaign on behalf of their hometown industry. (See related articles below.)