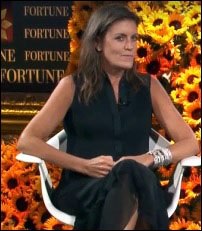 Emails released by WikiLeaks have led to the outing of an elaborate scheme to scour, buff and shine the decades of scandals attached to Hillary and Bill Clinton using the marketing, branding and messaging tricks employed by corporations to resuscitate a stale, discredited or sagging brand. We’ve also learned that at least one of those re-branders, Wendy Clark, had to sign a non-disclosure agreement with the Clinton camp, agreeing not to divulge details of her work. Clark acknowledged that agreement at a recent Fortune Magazine forum.

Clark is widely considered a corporate branding genius, having been responsible for the “Share a Coke” campaign at Coca-Cola which featured folksy names on the side of their cans and bottles. In January of 2015, it was reported that Clark was taking a three-month leave of absence from her demanding and high-level position as President of sparkling brands and strategic marketing in North America for the Coca-Cola Company. On April 6, 2015, a week before Hillary Clinton announced that she was a candidate for President, Coca-Cola announced that Clark was returning to her post at the company. (Clark is now CEO at DDB Worldwide, North America, a global advertising agency.)

But emails released by WikiLeaks show that Clark was consulting with the Clinton team before she took her leave from Coca-Cola. In this email dated December 8, 2014, long-time Clinton attorney and adviser Cheryl Mills writes to Clark about polling and branding. Mills indicates that Clark will be playing a major role, writing: “The process memo you are working on for today will help as I assume it will speak generally to the research you would need to do the branding or need to have done with you shaping it.”

In a February 14, 2015 email to a broad swath of corporate marketers, branders and polling experts that were already actively engaged in the Clinton campaign (despite the fact that Clinton had failed to alert the Federal Election Commission that she was conducting a campaign), Clark fleshes out more of her branding strategy. Clark writes:

“In the meeting last week the Secretary seemed to associate with what we had identified: fresh yet familiar, tenacity, resilience, empathy, creativity, action-oriented, future focused.”

In describing the logo, or “mark” that was in the works for the Clinton campaign, Clark writes in the same email:

“…the mark is, at the same time, anchored on the unassailable truth of Secretary Clinton’s life and career — being in service of others. It’s not about her, it’s about you…”

The logo, the “H” with the forward-facing arrow, was created by Michael Bierut, a partner at the international design firm, Pentagram. Bierut has worked on major corporate branding campaigns for Saks Fifth Avenue, Billboard Magazine, and the New York Jets, among numerous others.

Two of those copied on Clark’s February 14, 2015 email were Jim Margolis of GMMB and David Binder of David Binder Research. GMMB bills itself on its web site as follows:

“You may have a name. You may have a logo. But you move people with a brand…The road o building that brand can be loaded with emotional potholes, so we offer a proven process that gets everyone in your organization to a simple, inspiring idea to drive everything you do.”

The David Binder Research web site says it has “enjoyed a long-term ongoing partnership with President Barack Obama’s White House, providing award-winning messaging work and conducting research on a number of different initiatives.” Other clients, it says, include “large corporations.”

On March 26, 2015, Clark sent another email to Cheryl Mills and John Podesta, the man who would become Chair of the Clinton campaign. In it, she said there was more work to be done on “Humanizing Hillary with more films and avenues to do so.” Clark also included in this email a link to films that the Clinton team had reviewed that day, indicating that significant work on films and marketing had been done well in advance of Hillary Clinton filing with the Federal Election Commission to alert them that she was a fully functioning candidate for Federal office.

According to Federal election law, after a candidate spends $5,000 or more on their campaign, it must file a notification with the FEC and begin reporting contributions and disbursements. Hillary Clinton filed her notification with the FEC on April 13, 2015, but when her first quarterly filing was made, the FEC web site lists payments to Clark Advisory Services, LLC at the home address of Wendy Clark in Atlanta, Georgia in January 2015 and March 2015, when according to the FEC, there was no Hillary for America campaign account from which to make those payments, and another payment on April 14, 2015, one day after Clinton filed with the FEC. (The total of the three payments to Clark came to $49,998.)

Marc Elias at Perkins Coie is the lawyer for the Clinton campaign. Wall Street On Parade emailed him last evening to inquire how the campaign was able to make payments in January, February and March – when, according to the FEC, it didn’t exist. Thus far, we have not heard back from Elias. We will update this article should he choose to respond. (See related article below.)