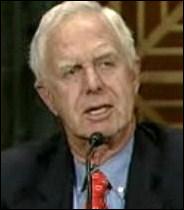 Arthur Levitt, Former Chair of the SEC, Promised to Be Wall Street’s Uncle, and Delivered

Senator Warren is a genuine champion of the investing public and understands how the SEC has become a lapdog to Wall Street under White’s inept leadership. Levitt is part of the Bill Clinton machine that de-regulated Wall Street and turned it into a massive looting racket in the 1990s through today. It’s important to take note of Levitt’s effort to muzzle Warren in the pages of the Wall Street Journal. Expect to see more of this coming from a lot more of Wall Street’s cronies.

Arthur Levitt was appointed as SEC Chair by President Bill Clinton in 1993. Levitt served until 2001, making him the longest serving SEC Chair. Levitt had previously been Sandy Weill’s business partner in a Wall Street brokerage firm. In 1998, when Weill wanted to create Citigroup by merging his Travelers Group, which owned an insurance company, brokerage firm and investment bank, with Citibank, an insured depository bank – an illegal merger at the time under the Glass-Steagall Act — Levitt and his other cronies in the Bill Clinton administration eagerly got the ball rolling.

During his long tenure, Levitt presided over the serial looting of the public by Wall Street. Levitt was in charge when two university professors discovered that the Nasdaq stock market had been fleecing investors for more than a decade in an illegal price-fixing scheme. Levitt was in charge when Wall Street’s fraudulent research and IPO pump and dump schemes led to the great tech bubble crash, wiping away $4 trillion in market value. Levitt was there when JPMorgan and Citigroup helped Enron cook its books.

So when Levitt tells readers of the Wall Street Journal that “Mary Jo White has been a firm, thoughtful SEC chairman who, through speeches and a carefully chosen agenda, has made herself a capable steward of an essential agency,” one should take it with a grain of salt.

In 1994, a year after taking the reins at the SEC, Levitt let his pals on Wall Street know they did not have to fear “Uncle Arthur.” Speaking at the industry’s trade association in Boca Raton, Florida, Levitt said:

“As I meet you and greet familiar faces, I recollect previous visits to this Boca meeting — memories of Morgan Stanley’s parties, dinners with Congressional staffers, hot dogs in the St. Louis Room, and gala, invitation-only dances for honored guests and members of the old guard…I find myself looking at the industry now from a very new perspective — no longer a member of the immediate family, more like an uncle viewing the family from afar…”

In the Gary Weiss’ book, Wall Street versus America, Weiss calls Levitt “the terminally shame-deprived Levitt…who can spin the most laughable cop-out into an investor victory…” Indeed, thanks to a big public relations push, Levitt tried for years to rehabilitate himself as the champion of the little guy. After the repeal of the Glass-Steagall Act on his watch brought about the greatest Wall Street collapse in history in 2008, he somehow got himself a seat to testify at the Senate Banking Committee. On March 26, 2009, Levitt told the Committee the following:

“The public may demand that you act over some momentary scandal, but you must not give in to bouts of populist activism. Your goal is to serve the public not by reacting to public anger, but by focusing on a system of regulation which treats all market actors the same under the law, without regard to their position or status… Specifically, some have suggested that we should re-impose Glass-Steagall rules regarding the activities and regulation of banks. Those rules kept the nation’s commercial banks away from the kinds of risky activities of investment banks…Perhaps we were too hasty in doing away with it, and should have held onto several key principles that made Glass-Steagall an effective bulwark against systemic risk in America’s banking sector. That does not mean we should pursue ‘turn-back-the-clock’ regulation reforms and re-impose Glass-Steagall.”

Mary Jo White should never have been confirmed by the Senate as SEC Chair because both she and her husband, at their two respective law firms, had represented every major Wall Street bank. (Under Federal law, the conflicts of the spouse become the conflicts of the Federal regulatory head.) Levitt should never have become SEC Chair because of his close working ties to Wall Street.