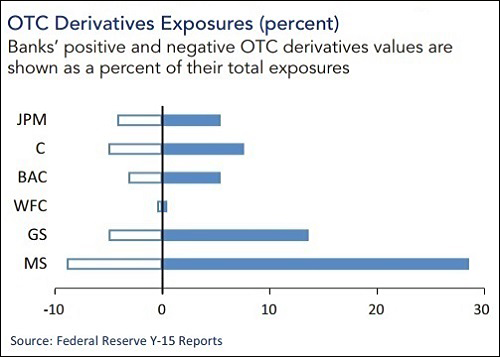 One day after Federal Reserve Chair Janet Yellen failed to reassure the House Financial Services Committee that too-big-to-fail banks no longer pose a threat to the U.S. financial system, the stock market settled the debate. Germany’s largest bank had a dizzy spell and Wall Street banks swooned under a collective anxiety attack.

The writing has been on the wall for a very long time that this scenario was going to eventually play out given the lack of serious reform of Wall Street. What was notable about yesterday’s market activity is that among the major Wall Street banks, Goldman Sachs fared worst, falling 2.75 percent, followed by Morgan Stanley which shed 2.30 percent and Citigroup, which lost 2.28 percent.

All of the major Wall Street banks were dragged down by the 6.67 percent decline in the shares of Deutsche Bank by the close of trading on Thursday on the New York Stock Exchange. Since last October, Deutsche Bank shares have lost 62 percent of their market value, leaving the bank with a common equity market value of $15.8 billion to anchor assets of $1.9 trillion. (See Is Deutsche Bank as Dangerous to Financial Stability as Citigroup Was in 2008.)

Why Goldman Sachs, Morgan Stanley and Citigroup shed more equity value than Wall Street banks with much larger balance sheets like JPMorgan Chase and Bank of America was foretold on February 12, 2015 when the research agency created under the Dodd-Frank financial reform legislation issued a report with the above troubling graph. The report from the Office of Financial Research (OFR) was titled Systemic Importance Indicators for 33 U.S. Bank Holding Companies: An Overview of Recent Data. The above graphed data from the report indicates that Morgan Stanley, Goldman Sachs and Citigroup had the highest OTC derivatives values as a percent of their total exposures.

OTC derivatives are those that are contractually arranged between the big banks with little transparency for regulators. In addition to the biggest Wall Street banks, Deutsche Bank has a boatload. Deutsche Bank characterized its net derivatives exposure as follows in its 2015 annual report:

“At December 31, 2015, the notional related to the positive and negative replacement values of derivatives and off balance sheet commitments were € 255 billion, € 606 billion and € 31 billion respectively.”

That’s at a bank with a stock market capitalization of $15.8 billion – a market cap that is evaporating like a snow cone in July. This is also the bank that the International Monetary Fund said in a June report was “the most important net contributor to systemic risks.” In a graph accompanying that IMF report, every major Wall Street Bank was identified as having potential outward spillover impacts from troubles at Deutsche Bank, including the three that experienced the worst selloffs yesterday: Goldman Sachs, Morgan Stanley and Citigroup.

The February 2015 OFR report effectively warned that one or more foreign banks was holding a noose around the necks of Wall Street banks in this brief paragraph:

In other words, the contagion Deutsche Bank is spreading is all about the opaque derivatives that the Federal Reserve and Congress have failed to meaningfully reform. President Obama has also failed the American people in this regard – even going so far as to misinform the public on the derivatives issue in a press conference on March 7 of this year. (See video below and our in-depth report here.)