Deutsche Bank Says “No” to $14 Billion DOJ Fine: It Must Have Learned Its Negotiating Skills at the Trump Institute 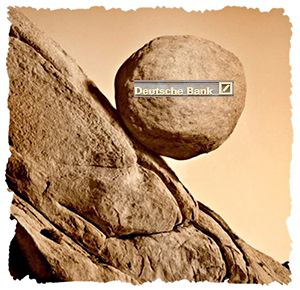 The old adage that when one is already in a hole, one should stop digging, has apparently not found its way to the corner offices of Deutsche Bank. After a non-stop two years of scandals, the Bank has decided to take its shareholders on another heart-thumping cop car chase by publicly feuding with the U.S. Justice Department. After the Wall Street Journal reported in the wee hours this morning that the Justice Department was proposing a fine of $14 billion for Deutsche Bank’s involvement in tricking investors with toxic mortgage backed securities, the Bank had the temerity to tell Reuters that it was planning to “fight” the demand. This negotiating tactic sounds a little like something that might have been taught at the Trump Institute.

In just the past two years, Deutsche Bank, Germany’s largest bank with a large trading footprint in the U.S., has been terrifying widows and orphans – not to mention its shareholders. Two of its executives, William Broeksmit and Charles Gambino, hanged themselves. In June of this year the International Monetary Fund issued a report calling Deutsche Bank “the most important net contributor to systemic risks” on a global basis. In the same month, the U.S. Federal Reserve indicated that the U.S. unit of Deutsche Bank, Deutsche Bank Trust Corp., had failed its stress test. The Fed cited “material unresolved supervisory issues” as one of the reasons for the failed grade.

Last year Deutsche Bank settled charges with British and U.S. authorities for $2.5 billion for rigging the interest rate benchmark known as Libor. It pleaded guilty to the U.S. charges.

In 2014 Deutsche Bank, along with Barclays, was the target of an investigation by the U.S. Senate’s Permanent Subcommittee on Investigations. The duo had created an elaborate scheme to assist hedge funds in magically converting millions of short-term trades into long-term capital gains, a much lower tax rate, and thus ripping off the U.S. Treasury of tax revenue. Called “basket options” or MAPS at Deutsche Bank, the bank effectively loaned out its balance sheet to hedge funds to conduct billions of trades each year in trading accounts under the bank’s name, deploying massive leverage as high as 20:1 that is illegal in a regular Prime Brokerage account for a hedge fund client. The banks got paid through margin interest, fees for stock loans for short sales, and trade executions.

This was not the first time Deutsche Bank had engaged in tax dodge maneuvers. According to the final report of the Senate’s Permanent Subcommittee on Investigations, there had been a previous history of tax abuse. The report found the following:

“About ten years ago, Deutsche Bank became the subject of a series of investigations focused on its participation in abusive tax shelters from 1996 through 2002, which aided and abetted evasion of an estimated $5.9 billion in U.S. income taxes. On December 21, 2010, Deutsche Bank and the U.S. Attorney for the Southern District of New York executed a non-prosecution agreement (NPA) related to the bank’s involvement with the abusive tax shelters. Under the agreement, the bank paid more than $550 million to the United States, and the U.S. Attorney and the U.S. Department of Justice (DOJ) agreed not to prosecute Deutsche Bank criminally for participating in abusive tax shelters benefiting its clients from 1997 to 2005, provided the bank met certain requirements.

“Those requirements included Deutsche Bank’s continued cooperation with the DOJ in its tax shelter prosecutions, and appointment of an independent expert to oversee bank reforms to ensure the bank stopped participating in transactions used to defraud the IRS. The NPA also banned Deutsche Bank’s involvement with any pre-packaged tax products, which were the type of tax shelters that led to the criminal proceedings.”

The Senate report raises a cloud as to why the Justice Department didn’t prosecute Deutsche Bank for what looks like a travesty of the terms of its Non Prosecution Agreement (NPA), writing:

“During the multiple years in which the NPA was negotiated, the bank apparently made no mention of the MAPS product. As explained later, after a Federal Reserve Bank examination identified concerns with the MAPS product in 2012, Deutsche Bank, at the insistence of the Federal Reserve, brought the product to the attention of the U.S. Attorney for the Southern District of New York in connection with the NPA. The bank contacted the U.S. Attorney’s Office in August 2012, and engaged in several followup discussions and meetings. Aside from those contacts, the Subcommittee is unaware of what, if any, actions were taken by the U.S. Attorney’s Office in response. The NPA is still in effect.”

According to its own report of March 31, 2016, Deutsche Bank is currently under investigation related to its trading of precious metals and over its conduct in U.S. Treasury auctions as well as dozens of other probes and civil lawsuits.

Given its recent history and the pitchfork mentality of the U.S. public when it comes to out-of-control behemoth banks, railing against the U.S. Justice Department in print doesn’t seem like a particularly sound strategy for a serial recidivist.

Correction: A typo appeared in the first paragraph. The word “tenacity” was used instead of “temerity.” We have now corrected that error.