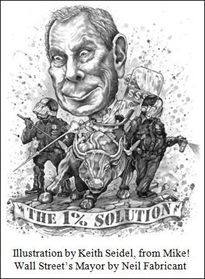 Michael Bloomberg served three terms as the Mayor of New York City from January 2002 to January 2014. The last term was made possible by the Mayor spending an estimated $60-$90 million of his own money repealing the two-term limits – an act that outraged many New Yorkers.

According to Forbes, during Michael Bloomberg’s 12-year stint as Mayor, his wealth exploded more than ten-fold, from $3 billion to $31 billion. The bulk of Bloomberg’s wealth has derived from leasing his Bloomberg data and news terminals at a cost of approximately $24,000 per terminal per year to tens of thousands of Wall Street trading desks and global banks around the world.

The Mayor’s wealth and where it comes from is a reality that poses an inherent conflict of interest for any news outlet but it is especially so for a news organization like Bloomberg News that is supposed to be investigating the very Wall Street firms that write checks to pay for their Bloomberg terminals.

While the Mayor was running the City of New York, maintaining a hands-off approach to the Bloomberg newsroom, investigative reporters there regularly distinguished themselves. Two blockbuster stories came out of that era that greatly advanced the public interest thanks to the courageous reporting of Bloomberg reporters.

Mark Pittman was one of those reporters. His stonewalled Freedom of Information Act requests to the Federal Reserve led to Bloomberg News filing and winning a Federal Court case against the Fed. The Fed was forced to turn over documents showing that it had secretly funneled a cumulative $13 trillion in below-market-rate loans to Wall Street banks and foreign banks during the financial crisis. Pittman died at age 52 in 2009. (A Bloomberg News story carried in the Washington Post at the time of his death reported that “He had heart ailments, although the cause of death was not immediately clear.”)

The reporting team of  Stephanie Ruhle, Bradley Keoun and Mary Childs broke the story in 2012 on JPMorgan Chase’s wild gambles in derivatives – a story that infamously became known as the London Whale. Those revelations led to Congressional hearings; an intense investigation by the U.S. Senate Permanent Subcommittee on Investigations that revealed the bank had been using depositors’ savings to make its gambles; $1.2 billion in fines; and losses of at least $6.2 billion on JPMorgan’s wild gambles. Ruhle has moved on to MSNBC; Keoun is now a freelance writer; Mary Childs is now reporting for the Financial Times.

In June of last year, Damaris Colhoun reported at the Columbia Journalism Review that “highly respected journalists” who had been “lured away from The Wall Street Journal,” were being “sidelined or pushed out…”

Colhoun also wrote about how new investigations are now commenced at Bloomberg News:

“…for an investigation to pass muster, it must hew to a more restrictive definition of an appropriate Bloomberg subject, namely finance, money, and power. To some, this represents a curtailing of ambition, one that favors softer, magazine-style articles over deep, sustained investigations…

“That’s why it’s often been a thorny endeavor for Bloomberg to launch major investigations of corporate and other targets that pose a conflict of interest, akin to pointing a gun in the customer’s face.”

Equally troubling, Colhoun also noted that the former mayor is spending “more time in the newsroom than he did even before leaving for city hall.”

Two particularly embarrassing episodes have arisen in recent years. In 2015, an internal memo by Bloomberg reporter Dawn Kopecki was leaked to the media where she called the atmosphere at Bloomberg News “a climate that makes editors and reporters afraid to speak their minds.” Kopecki was part of a round of layoffs three months later. She now reports for the San Antonio Express-News.

The former Editor-in-Chief, Matt Winkler, was called out in a New York Times article in 2013 after Bloomberg reporters alleged he had spiked articles critical of China after they had worked on the reports for the better part of a year. The New York Post also wrote that reporter Michael Forsthye “was escorted from Bloomberg’s Hong Kong office” on November 14, 2013 “after he was fingered as the person who leaked embarrassing claims about how the news and data giant spiked a story that could have angered leaders in China.” China is an important source of Bloomberg Terminal leases.

Wall Street On Parade has also reported on a pattern of troubling editorials and opinion pieces at Bloomberg which are factually unsound and/or conflicted. In March we reported that now Editor-in-Chief-Emeritus Matt Winkler had written a highly questionable opinion piece titled “Stop Bashing Wall Street. Times Have Changed.”

One of the most absurd assertions in Winkler’s column was on the issue of derivatives. Winkler wrote:

“Banks also have reined in most of the proprietary trading in derivatives that brought them into conflict with their depositors.”

At the same time that Winkler was making that statement, Citigroup – the giant U.S. bank that blew itself up in 2008 and received the largest bailout in U.S. history – was loading up on the very same derivatives, credit default swaps, that blew up the big U.S. insurer, AIG, and added billions of dollars more to Citigroup’s own losses. (See our report: “Bailed Out Citigroup Is Going Full Throttle into Derivatives that Blew Up AIG.”)

Then in May of this year, Michael Bloomberg teamed up with the CEO of one of his largest customers, JPMorgan Chase’s Jamie Dimon, to write an OpEd at the Bloomberg web site. The two billionaires were subtly suggesting in the opinion piece that the unprecedented wealth inequality in the U.S. might be improved if high schools offered vocational training to those not heading to college. Under Dimon’s leadership of JPMorgan Chase, the bank received a combined three felony counts in 2014 and 2015. That’s the first time that has happened in U.S. history where a major insured bank is involved. Is this really an appropriate voice to lecture the country on how to reform itself?

During the Occupy Wall Street protests in Manhattan that occurred while Michael Bloomberg was the Mayor (which were directed against the firms that made Bloomberg a billionaire and continue to add billions to his net worth), the New York Civil Liberties Union (NYCLU) and more than a dozen major media outlets and media associations wrote to the Bloomberg administration to document beatings, assaults, arrests and intimidations of reporters attempting to do their job. (See here and here.)

The NYCLU noted the following in its letter:

“Beyond preventing journalists from documenting the actions of the police, numerous journalists were arrested and subjected to physical force by NYPD officers during and after the eviction. We have heard numerous stories of NYPD officers liberally using force against both journalists and others. There seemed to be no supervisors in some of the areas, and officers gave the impression of ‘a blue-shirt free-far-all,’ in which they did not know what they were supposed to be doing and instead improvised aggressively.”

The New York Times and other media outlets described the following incident as one of many forms of physical abuse against reporters during the Occupy Wall Street protests:

“…a photographer, standing on the sidewalk on Trinity Place, was photographing a man the police were carrying from somewhere in the park who was covered in blood. The photographer was standing behind a metal barrier 20 to 30 yards from the scene. As he raised his camera to take a picture two other police officers came running toward him, grabbed a metal barrier and forcefully lunged at him striking the photographer in the chest, knees and shin. As they did that they screamed that he was not permitted to be taking pictures on the sidewalk – the most traditionally recognized public forum aside from a park.”

Wall Street On Parade also broke the story that the Bloomberg administration was overseeing a high tech surveillance center in lower Manhattan which, bizarrely, allowed personnel from the same Wall Street firms being charged with serial crimes against the citizenry to jointly man the surveillance operation with the New York City Police Department. The Bloomberg administration refused to answer any of our Freedom of Information Law (FOIL) requests on this matter.