Richard Cordray: Blacks Are Trapped in a System of Financial Barricades 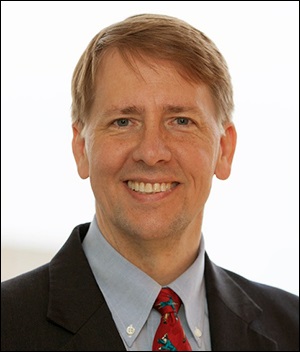 Richard Cordray and the Federal agency he heads, the Consumer Financial Protection Bureau (CFPB), have been in the cross hairs of right wing Republicans and the corporations they front for since the agency opened its doors in 2011 to confront the abuses exposed in the financial crisis of 2008.

The agency’s work to level the playing field for all Americans and stop the vicious wealth transfer system that the deregulation era of the 90s has unleashed on the financially unsophisticated has fueled unprecedented backlash. During the Republican Presidential debate on November 10 of last year, a corporate-funded front group, the American Action Network, with ties to the Koch brothers, repeatedly ran an advertisement portraying the CFPB as a communist group. (See our detailed report here.)

The CFPB presents multiple threats to the financial looters. The CFPB has made it easy for consumers to file complaints; for whistleblowers to come forward; for the public to share their experiences so that the agency can get an early warning on new financial frauds gathering momentum; and it provides financial education materials to the public covering a broad spectrum. It has also levied hefty fines against wrongdoers and exposed the sordid details of their schemes.

Despite the serial backlash Cordray has faced and the ongoing efforts to strip his agency of its independence, he isn’t backing down. Yesterday, Cordray became something of a whistleblower himself, delivering a speech to the NAACP’s annual convention in Cincinnati and exposing the myriad ways that African Americans are targeted by the institutionalized wealth stripping apparatus that has its entrenched tentacles spread across America.

The day after Melania Trump, wife of billionaire Donald Trump, was lifting passages from Michelle Obama’s 2008 speech to suggest to the audience at the Republican National Convention that all it takes to get ahead in America is hard work, Cordray was describing to his audience the financial barricades still faced by African Americans in their quest to find that elusive American dream. Cordray provided the following devastating statistics:

“For white households in America, median income is $60,000; for African-American households, it is $35,000. White households in America have an average net worth of $134,000, but for African-American households, it is $11,000. Home ownership among white consumers is about 71 percent; for African Americans, it is about 42 percent. And the median house owned by a white homeowner is worth over $85,000, compared to $50,000 for African Americans. Small wonder that many feel trapped in a system that seems to barricade every avenue for economic advancement.”

“Such dealer discretion can lead to pricing disparities based on race or other prohibited factors that may violate the federal fair lending laws. Our extensive research has indicated that unfettered discretion in pricing the markup on loans frequently leads to African Americans and Hispanics being charged higher rates than white consumers in similar financial circumstances.”

Denial of fair credit or any credit is another financial barricade facing the minority community. Cordray explained that access to the American dream requires access to “affordable, responsible credit.” But in many African American communities, said Cordray, “credit is often unavailable, may be quite expensive, or is offered through predatory practices. For too many consumers of color, the pursuit of prosperity can be difficult or even ruinous.”

In addition to geographic redlining in housing markets, Cordray says the CFPB has identified another chilling problem:

“Our research shows that a higher share of African Americans and Latinos are shut out of mainstream credit markets. Last year, our analysis of data from one of the three nationwide credit reporting companies showed that 26 million Americans have no credit history at all. We call this ‘credit invisibility.’ We found that the share of African-American consumers who are credit invisible is almost 50 percent higher than for non-Hispanic whites.

“When consumers lack a credit report, the consequences can be profound. If you cannot access credit, it becomes nearly impossible to build wealth. It may become difficult even to pass a background check to get a job. Our report last year found that of the consumers who live in low-income neighborhoods, almost 30 percent experience complete credit invisibility and another 15 percent have insufficient credit histories to generate a credit score of the type that lenders typically use. If we are going to succeed in making every consumer count, we must understand and address the problem of credit invisibility that strands these millions of consumers on a barren shore of economic deprivation.”

Cordray calls the work of the CFPB “making every consumer count.” But it goes much deeper than that. It’s really about making every citizen count. It’s about acknowledging that creating breakthrough innovations that can foster new jobs and new industries and maintain America’s competitiveness in the world must be open to all of America’s citizens, regardless of race or gender or ethnic background. When America builds walls, whether mortar or financial, to barricade our best and brightest from succeeding, we imperil the entire nation’s survival.