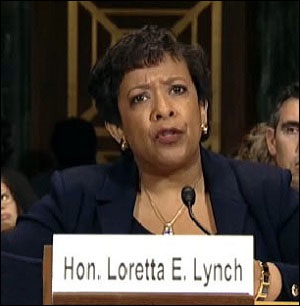 The U.S. Justice Department’s Attorney General, Loretta Lynch, has already released her written statement that she will deliver in person to the House Judiciary Committee at 10:00 a.m. tomorrow. It says nary a peep about the private, half-hour meeting with Bill Clinton that she held on her plane on the tarmac in Phoenix just eight days before her FBI Director, James Comey, would hold a surprise press conference and opine that no responsible prosecutor would bring criminal charges against Hillary Clinton, while Comey simultaneously fleshed out a boatload of falsehoods that Hillary Clinton had told to the American people about her handling of Top Secret and other classified material.

“…the recent announcement by FBI Director Comey that he does not recommend criminal charges be brought against Hillary Clinton for her mishandling of classified information raises serious concerns. It is uniquely troubling in light of Attorney General Lynch’s secret meeting with former President Bill Clinton. No one is above the law and the American people need to know that federal law enforcement is taking this misconduct seriously.”

Earlier today, news broke at the wire services that the Washington Post and ABC News had conducted a poll that found that 56 percent of Americans disapprove of FBI Director Comey’s recommendation against bringing charges against Hillary Clinton. Only 35 percent approve. Equally problematic for Clinton, an even higher percentage of Independents disapproved of Comey’s action (59 percent). With so many Independents on the fence about voting for Trump, losing the confidence of Independents could be a major blow to Democrats if Clinton is the Democratic Party’s nominee.