Sanders Is Correct: “Evidence Is Extremely Clear…I’m the Stronger Candidate to Defeat Trump” 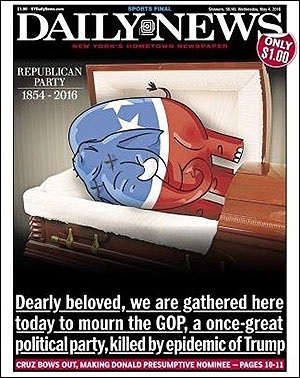 Last evening, Senator Ted Cruz of Texas withdrew from the Republican Presidential race, leaving Donald Trump the presumptive nominee following a large margin of victory for Trump in the Indiana primary. That reality triggered a front page cover today at the New York Daily News with an obituary for the Republican Party.

Presidential candidate Senator Bernie Sanders has been anticipating Trump’s success for months and pointing out, time and again, that national poll after national poll shows Sanders to be the much stronger contender in a general election against Trump. (Sanders won the Indiana primary yesterday with a 52.5 percent victory over Hillary Clinton’s 47.5 percent share of the vote.)

In a speech to the National Press Club on May 1, Sanders explained his strategy heading into the Democratic Convention on July 25-28 in Philadelphia (see video below). His written remarks (prior to delivery) explained:

“First, those super delegates in states where either candidate has won a landslide victory ought to seriously reflect on whether they should cast their super delegate vote in line with the wishes of the people in their states.

“Let me give you just a few examples:

“In the state of Washington, we won that caucus with almost 73 percent of the vote but at this point Secretary Clinton has 10 super delegates. We have zero.

“In Minnesota, we won the caucus there with 61 percent of the vote. Hillary Clinton has 11 super delegates. We have three.

“In Colorado, we won that state with 59 percent of the vote. Secretary Clinton has 10 super delegates. We have zero.

“In New Hampshire, we won that state with more than 60 percent of the vote. Secretary Clinton has six super delegates. We have zero.

“And that pattern continues in other states where we have won landslide victories.

“Secondly, and extremely importantly, Secretary Clinton and I have many differences on some of the most important issues facing the American people. We disagree on trade, on breaking up Wall Street banks, on raising the minimum wage to $15 an hour, on imposing a carbon tax to combat climate change, on insisting that the wealthy and large corporations pay their fair share of taxes, on fracking and on a number of other issues.

“But where Secretary Clinton and I agree and where every delegate to the Democratic convention agrees is that it would be a disaster for Donald Trump or some other right-wing Republican to become president of the United States.

“Therefore, it is incumbent upon every super delegate to take a hard and objective look at which candidate stands the better chance of defeating Donald Trump. And in that regard, I think the evidence is extremely clear that I would be the stronger candidate to defeat Trump or any other Republican. This is not just the subjective opinion of Bernie Sanders. This is based on virtually every national and state poll done in the last several months.”

We decided to check out those polls. Sanders is spot on with his analysis as indicated in the graphs below, posted at the RealClear Politics website. In an average of the individual polls listed, Clinton beats Trump by 6.2 points versus a Sanders’ margin of victory of 13.6 points. And that’s now – before Trump runs tens of millions of dollars of negative campaign ads that focus on the serial Clinton scandals like email-gate; the millions of dollars she has taken from Wall Street banks for secret speeches; the foreign and Wall Street money that has been funneled to the Clinton Foundation; and the questionable tactics of the Hillary Victory Fund.

Sanders also explained in his speech at the National Press Club how Democrats win when there is a large turnout, noting that the excitement and energy of likely voters are coming from his candidacy. Sanders stated:

The reality of this energy and excitement was on prominent display in Clinton’s own home state of New York in the leadup to the recent primary there. Sanders was drawing over 20,000 people to his rallies versus 400 to 600 people at Clinton’s rallies.

Corporate media, for the most part, fails to highlight Sanders’ strengths against Trump in a general election match up.  But one thing is for sure now. Corporate media’s efforts to shame Sanders into withdrawing from the race and allowing the Clinton coronation to proceed unchallenged, has simply strengthened Sanders’ resolve.