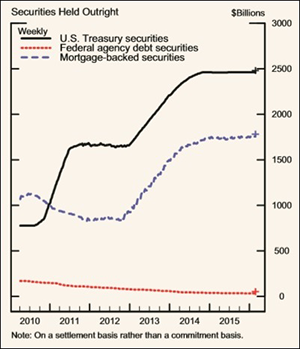 The U.S. is now in its eighth year since the Wall Street bank collapse of 2008 and most members of the general public believe the bailouts are long finished. That’s a fallacy. Last Friday, the Government Accountability Office (GAO) released a report showing that there are 16 banks still involved in the original bailout program – one of which, First Bancorp, owes the government $124.97 million or 49 percent of the funds owed by the other 15 banks combined. First Bancorp continues to trade on the New York Stock Exchange under the stock symbol, FBP. The common stock of First Bancorp has declined from over $150 a share in 2009 to close last Friday at $3.72. According to the company’s 10K filed with the Securities and Exchange Commission for year-end December 31, 2015, the U.S. government still owned 4.8 percent of the company’s common stock at that time.

In addition, as Wall Street On Parade reported last month, the U.S. Treasury agreed to pump in an additional $258.1 billion going forward if Freddie Mac or Fannie Mae run into trouble, on top of the $187.5 billion they have already received from the U.S. taxpayer. In their first quarter earnings reports, both companies reported significant losses in their derivatives books but did not tap their Treasury lifelines further – at least for now. Freddie Mac and Fannie Mae were put into conservatorship by the U.S. government during the 2008 crisis. Wall Street banks are entangled with Freddie Mac and Fannie Mae because they serve as counterparties to each other’s trillions of dollars in derivatives.

Then there is the Federal Reserve’s balance sheet which pre-crisis stood in the neighborhood of $800 billion and today stands at $4.5 trillion. Making up the bulk of the assets on the Federal Reserve’s books are the U.S. Treasury securities and mortgage-backed securities (MBS) issued by Fannie Mae, Freddie Mac and Ginnie Mae that the Fed sopped up from markets choking on the stuff during the crash. According to the Fed’s March 2016 balance sheet report, it currently holds $2.46 trillion of Treasuries and $1.76 trillion in agency MBS.

According to the March 15-16, 2016 minutes of its Federal Open Market Committee meeting, the Federal Reserve plans to continue its reinvestment program and rollover program, which effectively means its balance sheet is not going to shrink back to normal anytime soon. The minutes read:

“The Committee also decided to maintain its existing policy of reinvesting principal payments from its holdings of agency debt and agency mortgage-backed securities in agency mortgage-backed securities and of rolling over maturing Treasury securities at auction, and it anticipated doing so until normalization of the level of the federal funds rate is well under way. This policy, by keeping the Committee’s holdings of longer-term securities at sizable levels, should help maintain accommodative financial conditions.”

And let’s not forget that the Federal Reserve’s Zero-Interest Rate Policy or ZIRP (which fueled a stock market surge while depriving seniors of interest income to buy groceries) remained in place from December 16, 2008 through December 16, 2015 – an incredibly long seven years. The Fed hiked its Fed Funds rate on December 16, 2015 to a meager 0.25-0.50 percent and immediately ushered in a freefall in stocks. According to Howard Silverblatt, the Standard and Poor’s Dow Jones Indices Senior Index Analyst, by January 20 of this year the Dow Jones Industrial Average’s loss of 10.03 percent year-to-date marked the worst start to a new year since 1897.

Noteworthy amid the stock selloff was what was happening to the Wall Street mega bank share prices – which the smartest guys in the room said were going to benefit from a steepening of the yield curve after a Fed rate hike by giving them room to charge higher rates on loans. The banks also went into freefall. By January 27, JPMorgan Chase, Citigroup, Bank of America, Goldman Sachs and Morgan Stanley had lost a combined $219.7 billion in market cap from their trading values seven months earlier.

The Fed has put further rate hikes on hold ever since. Which raises the question – is the U.S. locked in a perpetual twilight zone of the Wall Street crash of 2008? Or, is all we have to do is face the reality that we have to restore the Glass-Steagall Act, which would separate the insured deposits from the derivative casinos and let the casinos then fail if that’s what they are inclined to do. Holding the rest of the country hostage to make Jamie Dimon and Lloyd Blankfein happy can only, inevitably, usher in the next crash and bailout and permanent loss of confidence in the U.S. financial system.