The ink was barely dry on a proposal by the Consumer Financial Protection Bureau (CFPB) to restore the rights of banking customers to take their grievances into a court of law instead of a system of forced arbitration, when House Republicans threw together a hearing yesterday to scaremonger over make-believe evils of the proposal. The hearing was convened by the Republican-controlled Financial Institutions and Consumer Credit Subcommittee of the House Financial Services Committee and not-so-subtly titled “Examining the CFPB’s Proposed Rulemaking on Arbitration: Is it in the Public Interest and for the Protection of Consumers?” 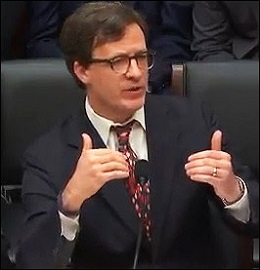 In decades of watching Senate and House hearings, we have never seen a more unlevel playing field. Out of the four witnesses called to testify, three were hand-picked to parrot the position of the banks with one lonely witness on hand to counter their repeated misstatements of fact. Watching that one lone witness, Paul Bland, Executive Director of the nonprofit organization, Public Justice, attempt to provide balance to the proceeding was akin to watching bullies on the playground hurling dumb epithets at the straight-A kid in their class.

Most of the Republicans didn’t even bother to call on Bland or ask his opinion.  At one point, Republican Congressman Blaine Luetkemeyer of Missouri, a former banker himself, posed a slanted question to all four witnesses, then snapped at Bland, “You’re outvoted, it’s three to one.” When you rig a witness panel, naturally you can easily achieve three opinions against one. (On a side note, Luetkemeyer is attempting to do to endangered species what’s currently happening to banking customers – strip them of protections from predators.)

According to a May 13 hearing memo, Bland wasn’t even supposed to be on the witness panel. It was initially structured to hear only what Republicans wanted the public to hear. One organization that should have been represented at the hearing alongside Bland is Public Citizen, it also has been exposing the evils of forced arbitration by corporations for decades and now has an important resource page set up for consumers.

Despite the hoops and hurdles thrown in his path, Bland consistently made confetti of the bogus arguments, having a mountain of facts and figures at his command. In his written testimony submitted to the Subcommittee, Bland further raised an issue that banks and the U.S. Chamber of Commerce would like to relegate to the dustbin of history: the egregiously crooked history of forced arbitration. Bland wrote:

“It is important to remember a key point of history: the company that was the largest private arbitration provider in the U.S. for about 10 years was shut down for corrupt and illegal behavior. The Committee should look back at history of the late (but not lamented) National Arbitration Forum (NAF).  This testimony will cite to a wealth of information that demonstrates the following propositions:  (a) for about a decade, NAF was by far the largest provider of arbitration services to lenders for consumer arbitration; (b) NAF’s operations were outrageously unfair to consumers, and favorable to lenders, to a degree where words such as ‘corrupt’ are entirely fair characterizations; (c) the overwhelming majority of courts took no action with respect to the NAF, as courts were reluctant or unwilling to probe into the fairness of a major arbitrator who was used by many corporations, in the wake of the Supreme Court’s rush to favor mandatory arbitration; and (d) the exact same factors that gave rise to the NAF – corporate desire for immunity from consumer protection law; a desire to win all or nearly all of the cases that were brought by consumers; a willingness by some actors to do anything to favor corporations if this would bring them substantial income; and the unwillingness of courts to meaningfully police arbitration – could easily give rise to a very similar actor down the road.

“Simply put, there is no reason whatsoever that such an entity could not arise again, cloak itself in respectability (as the NAF did by spending a ton of money on articles and studies praising itself, hiring former judges and prominent political figures, energetically litigating to block any discovery into its operations and to get secrecy orders covering any documents that did become public, etc.), and operate in a similarly unfair situation for an indefinite period.  Indeed, if the Minnesota Attorney General had not happened to discover that the NAF had crossed the most blatant line of inappropriate conduct – taking tens of millions of dollars for shares of a wholly owned corporation from entities who were currently litigating tens of thousands of cases in front of NAF – the NAF might well still be cheating consumers and operating as a semi-secret arm of the bank-defense community.”

“The subcommittee is posing the question to a badly skewed set of witnesses. Two of them are representatives of industry groups (the U.S. Chamber of Commerce and the Consumer Bankers Association), while a third has a persistent record of taking the corporate side in these debates. Only one represents a public interest perspective. It is hard to avoid the conclusion that the aim of the majority members of the subcommittee is to undermine the Consumer Bureau’s ability to protect consumers, not to seriously examine the effects of forced arbitration.

“That extra word ‘forced’ – missing from the hearing title – is key. Under the terms of the CFPB’s proposal, consumers and companies would remain perfectly free to resolve disputes through arbitration, but it would be a voluntary act on both sides. What the CFPB is seeking to regulate is involuntary arbitration, dictated and controlled by banks and financial companies through take it-or-leave-it contracts with consumers. More specifically, its proposal would bar companies from compelling consumers to sign away the right to join forces to challenge a practice that injures many people at once. Instead, each victim of wrongdoing would have to plead her individual case before an arbitration firm chosen and paid by (and dependent on the continued patronage of) the company she is complaining against.

“The Consumer Bureau has seriously examined the question the subcommittee is raising. Before issuing its proposal, the Bureau completed a 728-page study of forced arbitration in the consumer finance marketplace. The study showed that forced arbitration has utterly failed to produce any of the consumer benefits, such as lower prices or increased access to credit, claimed by its industry champions.

The three pro corporate arbitration witnesses were: Professor Jason S. Johnston, of the University of Virginia School of Law; Dong Hong, Vice President and Regulatory Counsel of the Consumer Bankers Association; and Andrew Pincus, a partner at the law firm, Mayer Brown LLP, representing the U.S. Chamber of Commerce.

Dong Hong frequently sounded like a pre-crisis Alan Greenspan, the former Chairman of the Federal Reserve, who believed that banks would do right by their customers because it would be against their business interests to do otherwise; therefore, banking regulations should be gutted to reduce economic costs. After that theory became law and blew up the financial system of the United States in 2008, forcing century-old financial institutions into bankruptcy or taxpayer bailouts, and causing the greatest economic downturn since the Great Depression, Greenspan sheepishly testified to Congress: “I got it wrong.”

Congressman Steve Pearce of New Mexico attempted to buttress the idea that banks have a built-in incentive to take care of their customers by telling a personal story about how American Airlines had lost a piece of his luggage and gave him a $150 voucher to buy new clothes. Comparing the airlines to the Wall Street mega banks that have been making headlines for eight solid years for rigging everything from the housing market to interest rates to foreign currency to high frequency trading to physical commodities is like comparing a caterpillar to a dinosaur – these are two radically distinct species. It also ignores what Senator Bernie Sanders has been explaining to millions of Americans for the past year: the business model of Wall Street is fraud.

In the meantime, the Los Angeles Times is reporting that if the bankers and their sycophants aren’t able to kill the arbitration proposal by the CFPB, they are “expected to take the deliciously ironic step of suing the federal government.” In a court of law, of course.