A Harvard MBA Guy Is Out to Bring Down the Clintons 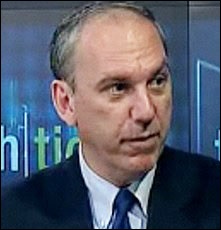 Remember Harry Markopolos? That’s the tenacious financial expert that pounded on the door of the Securities and Exchange Commission (SEC) for years, providing it with detailed, written evidentiary support for the premise that Bernie Madoff, the respected former Chairman of the NASDAQ stock market, was running a massive Ponzi scheme. The SEC never confirmed the fraud before Madoff confessed as he ran out of money in December 2008 because it skipped the most basic of investigation techniques: it failed to verify if real stocks and bonds actually existed in Madoff’s client portfolios. They didn’t.

There’s a new Markopolos in town with that same brand of leave-no-stone-unturned tenacity and he has his sights set on the charity operations of Hillary and Bill Clinton, known as the Clinton Foundation and its myriad tentacles. Ortel’s actions come just as Hillary Clinton makes her final sprint for the Democratic nomination for President of the United States with Bill in tow as her economic czar. Like Markopolos, Charles Ortel does not mince words.

In a 9-page letter dated yesterday and posted to his blog, Ortel calls the Clintons’ charity the “largest unprosecuted charity fraud ever attempted,” adding for good measure that the Clinton Foundation is part of an “international charity fraud network whose entire cumulative scale (counting inflows and outflows) approaches and may even exceed $100 billion, measured from 1997 forward.” Ortel lists 40 potential areas of fraud or wrongdoing that he plans to expose over the coming days.

Like Markopolos, Ortel has an impressive resume. Ortel’s LinkedIn profile shows that he received his B.A. from Yale and an MBA from Harvard Business School.  He previously worked as a Managing Director at investment bank Dillon Read and later as a Managing Director at the financial research firm, Newport Value Partners. In more recent years, Ortel has been a contributor to a number of news outlets including the Washington Times and TheStreet.com.

The charges being made by Ortel are difficult to dismiss as a flight of fancy because mainstream media has tinkered around the edges of precisely what Ortel is now calling out in copious detail.

In a 2013 New York Times article, “Unease at Clinton Foundation Over Finances and Ambitions,” reporters Nicholas Confessore and Amy Chozick hint that Hillary Clinton’s political operatives are occupying offices at the Clinton Foundation headquarters, writing that they “will work on organizing Mrs. Clinton’s packed schedule of paid speeches to trade groups and awards ceremonies and assist in the research and writing of Mrs. Clinton’s memoir about her time at the State Department, to be published by Simon & Schuster next summer.”

A June 2015 article in the Wall Street Journal by Kimberley Strassel stopped hinting and spelled it out boldly, calling the Clinton Foundation a “Hillary superPac that throws in the occasional good deed.” Strassel explained:

“The media’s focus is on Hillary Clinton’s time as secretary of state, and whether she took official actions to benefit her family’s global charity. But the mistake is starting from the premise that the Clinton Foundation is a ‘charity.’ What’s clear by now is that this family enterprise was set up as a global shakedown operation, designed to finance and nurture the Clintons’ continued political ambitions. It’s a Hillary super PAC that throws in the occasional good deed.”

Strassel goes on to provide the specific names of staffers who are deeply conflicted in their political work for Hillary Clinton’s presidential ambitions and  their ties to the charity.

One notable thing that Charles Ortel is pounding away at is, why, with all of these media red flags for years, the Clintons have been allowed by state charity regulators in multiple states in which they solicit donations as well as their Federal regulator, the IRS, to continue business as usual. Are we looking at the Madoff-effect where regulators are afraid to take on powerful figures?

We think that’s a very good question to which the American public deserves a credible answer.