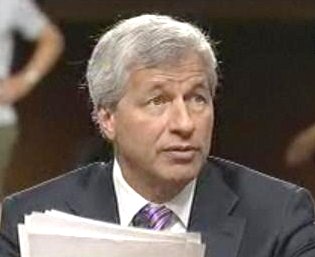 Jamie Dimon, Testifying Before the Senate Banking Committee on June 13, 2012 Over Massive Derivative Losses at the Depository Bank of JPMorgan Chase

Yesterday the Federal Reserve released a 19-page letter that it and the FDIC had issued to Jamie Dimon, the Chairman and CEO of JPMorgan Chase, on April 12 as a result of its failure to present a credible plan for winding itself down if the bank failed. The letter carried frightening passages and large blocks of redacted material in critical areas, instilling in any careful reader a sense of panic about the U.S. financial system.

A rational observer of Wall Street’s serial hubris might have expected some key segments of this letter to make it into the business press. A mere eight years ago the United States experienced a complete meltdown of its financial system, leading to the worst economic collapse since the Great Depression. President Obama and regulators have been assuring us over these intervening eight years that things are under control as a result of the Dodd-Frank financial reform legislation. But according to the letter the Fed and FDIC issued on April 12 to JPMorgan Chase, the country’s largest bank with over $2 trillion in assets and $51 trillion in notional amounts of derivatives, things are decidedly not under control.

At the top of page 11, the Federal regulators reveal that they have “identified a deficiency” in JPMorgan’s wind-down plan which if not properly addressed could “pose serious adverse effects to the financial stability of the United States.” Why didn’t JPMorgan’s Board of Directors or its legions of lawyers catch this?

It’s important to parse the phrasing of that sentence. The Federal regulators didn’t say JPMorgan could pose a threat to its shareholders or Wall Street or the markets. It said the potential threat was to “the financial stability of the United States.”

That statement should strike fear into even the likes of presidential candidate Hillary Clinton who has been tilting at the shadows in shadow banks while buying into the Paul Krugman nonsense that “Dodd-Frank Financial Reform Is Working” when it comes to the behemoth banks on Wall Street.

How could one bank, even one as big and global as JPMorgan Chase, bring down the whole financial stability of the United States? Because, as the U.S. Treasury’s Office of Financial Research (OFR) has explained in detail and plotted in pictures (see below), five big banks in the U.S. have high contagion risk to each other. Which bank poses the highest contagion risk? JPMorgan Chase.

The OFR study was authored by Meraj Allahrakha, Paul Glasserman, and H. Peyton Young, who found the following:

The Federal Reserve and FDIC are clearly fingering their worry beads over the issue of “liquidity” in the next Wall Street crisis. That obviously has something to do with the fact that the Fed has received scathing rebuke from the public for secretly funneling over $13 trillion in cumulative, below-market-rate loans, often at one-half percent or less, to the big U.S. and foreign banks during the 2007-2010 crisis. The two regulators released background documents yesterday as part of flunking the wind-down plans (living wills) of five major Wall Street banks. (In addition to JPMorgan Chase, plans were rejected at Wells Fargo, Bank of America, State Street and Bank of New York Mellon.) One paragraph in the Resolution Plan Assessment Framework and Firm Determinations (2016) used the word “liquidity” 11 times:

“Firms must be able to reliably estimate and meet their liquidity needs prior to, and in, resolution. In this regard, firms must be able to track and measure their liquidity sources and uses at all material entities under normal and stressed conditions. They must also conduct liquidity stress tests that appropriately capture the effect of stresses and impediments to the movement of funds. Holding liquidity in a manner that allows the firm to quickly respond to demands from stakeholders and counterparties, including regulatory authorities in other jurisdictions and financial market utilities, is critical to the execution of the plan. Maintaining sufficient and appropriately positioned liquidity also allows the subsidiaries to continue to operate while the firm is being resolved. In assessing the firms’ plans with regard to liquidity, the agencies evaluated whether the companies were able to appropriately forecast the size and location of liquidity needed to execute their resolution plans and whether those forecasts were incorporated into the firms’ day-to-day liquidity decision making processes. The agencies also reviewed the current size and positioning of the firms’ liquidity resources to assess their adequacy relative to the estimated liquidity needed in resolution under the firm’s scenario and strategy. Further, the agencies evaluated whether the firms had linked their process for determining when to file for bankruptcy to the estimate of liquidity needed to execute their preferred resolution strategy.”

Apparently, the Federal regulators believe JPMorgan Chase has a problem with the “location,” “size and positioning” of its liquidity under its current plan. The April 12 letter to JPMorgan Chase addressed that issue as follows:

“JPMC does not have an appropriate model and process for estimating and maintaining sufficient liquidity at, or readily available to, material entities in resolution…JPMC’s liquidity profile is vulnerable to adverse actions by third parties.”

The regulators expressed the further view that JPMorgan was placing too much “reliance on funds in foreign entities that may be subject to defensive ring-fencing during a time of financial stress.” The use of the term “ring-fencing” suggests that the regulators fear that foreign jurisdictions might lay claim to the liquidity to protect their own financial counterparty interests or investors.

JPMorgan’s sprawling derivatives portfolio that encompasses $51 trillion notional amount as of December 31, 2015 is also causing angst at the Fed and FDIC. The regulators wanted more granular detail on what would happen if JPMorgan’s counterparties refused to continue doing business with it if rating agencies cut its credit ratings. The regulators asked for a “narrative describing at least one pathway” for winding down the derivatives portfolio, taking into account a number of factors, including “the costs and challenges of obtaining timely consents from counterparties and potential acquirers (step-in banks).” The regulators wanted to see the “losses and liquidity required to support the active wind-down” of the derivatives portfolio “incorporated into estimates of the firm’s resolution capital and liquidity execution needs.”

According to the Office of the Comptroller of the Currency’s (OCC) derivatives report as of December 31, 2015, JPMorgan Chase is only centrally clearing 37 percent of its derivatives while a whopping 63 percent of its derivatives remain in over-the-counter contracts between itself and unnamed counterparties. The Dodd-Frank reform legislation had promised the public that derivatives would all become exchange traded or centrally cleared. Indeed, on March 7 President Obama falsely stated at a press conference that when it comes to derivatives “you have clearinghouses that account for the vast majority of trades taking place.”

But the OCC has now released four separate reports for each quarter of 2015 showing just the opposite of what the President told the press and the public on March 7. In its most recent report the OCC, the regulator of national banks, states that “In the fourth quarter of 2015, 36.9 percent of the derivatives market was centrally cleared.”

Three of the five largest U.S. banks (JPMorgan Chase, Bank of America and Wells Fargo) have now had their wind-down plans rejected by the Federal agency insuring bank deposits (FDIC) and the Federal agency (Federal Reserve) that secretly sluiced $13 trillion in rollover loans to the insolvent or teetering banks in the last epic crisis that continues to cripple the country’s economic growth prospects. Maybe it’s time for the major newspapers of this country to start accurately reporting on the scale of today’s banking problem.