New York Does Elections Like It Does Wall Street: With Its Finger on the Scale 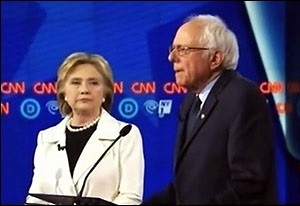 Hillary Clinton Tells Senator Bernie Sanders That There’s No Evidence She Can Be Swayed by Wall Street Money During CNN Debate, April 14, 2016

New York State has the toughest financial fraud law in the country. Under New York’s 1921 Martin Act, the State Attorney General’s office can bring both criminal or civil charges.

Despite that important fact, no CEO or CFO or key executive of any major Wall Street bank has been prosecuted by the New York State Attorney General for their role in the 2008 crash — which crippled the U.S. economy and has left the nation with GDP growth of two percent or less ever since. Despite the Martin Act’s unique anti-fraud statutes, Wall Street banks have been churning out serial new crimes since the 2008 crash, proving that both Justice Department prosecutors in Washington and timid prosecutors in New York are failing miserably at their jobs in deterring Wall Street crime.

What power brokers in New York do best is flood presidential campaigns with money and then fill key cabinet posts with cronies who understand how the game is played between New York and Washington. President Obama nominated Jack Lew to be his Treasury Secretary, despite the fact that he had been Chief Operating Officer of the very unit of Citigroup that crashed the bank. After the bank received the largest taxpayer bailout in U.S. history, Lew was given a $940,000 departing bonus from the insolvent bank because his employment contract at Citigroup guaranteed it as long as Lew accepted “a full time high level position with the United States Government or a regulatory body.” In other words, the serially charged Citigroup needed to add another regulator’s name to its speed dial to Washington.

The Treasury Secretary’s post gained even more clout after Obama signed into law the Dodd-Frank financial reform legislation in 2010. Under the new law, the Treasury Secretary would chair the newly created Financial Stability Oversight Council, consisting of every major regulator of Wall Street.

The one progressive Senator who stood up to the mountain of hubris attached to Lew was Senator Bernie Sanders. He voted against his Senate confirmation, stating the following:

When it came to nominating the Chair of the Securities and Exchange Commission, President Obama picked another New Yorker, Mary Jo White, who had headed up the litigation department for one of Wall Street’s key go-to law firms, Debevoise and Plimpton, which represented JPMorgan, UBS, Bank of America, and Morgan Stanley. White’s husband, John White, is a partner at law firm Cravath, Swaine & Moore LLP. Between the two law firms, every major Wall Street bank had been represented. Under Federal law, the conflicts of the spouse become the conflicts of the regulator. As a Harvard law graduate, the President knew or should have known that the SEC Chair would be forced to recuse herself from voting on key prosecution cases.

The lack of forward motion at the SEC became so intolerable that last June Senator Elizabeth Warren sent Mary Jo White a 13-page letter calling her out on a long laundry list of failures at the SEC. Warren detailed White’s failure to finalize rules requiring disclosure of the ratio of CEO pay to the median worker’s salary; her failure to curb the use of waivers for companies that violate securities law; the SEC’s continued practice of settling the vast majority of cases without requiring meaningful admissions of guilt; and White’s repeated recusals related to her prior law firm employment and her husband’s current employment.

Consistent with numerous other polls, the NBC News/Wall Street Journal poll also found that “just 19 percent of all respondents give Clinton high marks for being honest and trustworthy.”

So how did Hillary Clinton beat out the popular Senator Bernie Sanders in New York State where he was born and raised? Where he was drawing rallies of tens of thousands of supporters in the week before the primary? Where his ground game had the engaged support of thousands of members of the Working Families Party and Occupy Wall Street activists? The system was rigged to guarantee the outcome just as the revolving door between Wall Street and Washington guarantees that looting the little guy remains a lucrative business model on Wall Street.

Sanders has won by landslides in states that are open primaries – meaning Independents can vote. New York is one of only 11 states that are closed primaries, meaning Independents can’t vote nor can third parties like members of the Working Families Party and Greens. Even more outrageous in this critical election season, if a voter wanted to change their party affiliation to Democrat in order to vote for Bernie Sanders, they had to have the awareness that they needed to do that by October 9 of last year – an incredible six months before the primary. No other state in the U.S. imposes such an onerous cutoff for changing party affiliation.

“Bernie Sanders’ campaign on Tuesday called reports of voting irregularities in New York state ‘a disgrace’ as local officials rushed to condemn the city Board of Elections for stripping more than 125,000 Democratic voters from the rolls.

“ ‘It is absurd that in Brooklyn, New York — where I was born, actually — tens of thousands of people as I understand it, have been purged from the voting rolls,’ Sanders said during an evening campaign rally at Penn State University.

“In an email to CNN, Sanders spokesman Karthik Ganapathy called the state’s handling of the primary a ‘shameful demonstration.’

“ ‘From long lines and dramatic understaffing to longtime voters being forced to cast affidavit ballots and thousands of registered New Yorkers being dropped from the rolls, what’s happening today is a disgrace,’ he said.”

During Jack Lew’s confirmation hearing, Senator Chuck Grassley asked Lew why he took almost $1 million from an insolvent bank being propped up by the taxpayer. Lew answered: “I will leave it to others to judge.” When Hillary Clinton was asked by CNN’s Anderson Cooper why she took $675,000 for three speeches from Goldman Sachs, her response was: “Well, I don’t know. That’s what they offered.”

Moments later (see video below) Hillary stated to CNN’s national audience that “I’m proud to have 90 percent of my donations from small donors.” According to the Center for Responsive Politics, just 18 percent of Hillary’s campaign money comes from small donors. That figure was also 18 percent at the time she made her statement to Anderson Cooper. During that same exchange, Hillary attempted to play down the money coming from Wall Street. We pulled back the dark curtain on her campaign’s tricky maneuver with hedge funds in this article on April 5.

But the most tragic part of this sordid election season is that we’re the country asserting the right to teach democracy to the rest of the world.