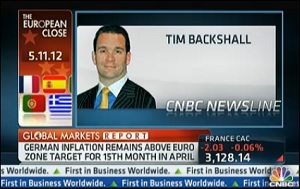 Tim Backshall, a Derivatives Expert and Frequent Guest on CNBC, Was Outed Today as an Anonymous Writer at Zero Hedge

Bloomberg L.P., majority owned by billionaire Michael Bloomberg, with a net worth of $45.3 billion according to Forbes, has today outed the anonymous writers responsible for the popular financial blog, Zero Hedge, a competitor to Bloomberg L.P.’s financial web site. Raising eyebrows in journalism circles, Bloomberg’s reporters obtained the text of internal chat sessions at Zero Hedge which contained strategies for building traffic at the site. To some, that raises alarms of obtaining trade secrets – an issue over which Wall Street firms have sought, and received, criminal prosecutions.

Also noteworthy, the article’s authors, Tracy Alloway and Luke Kawa, seem to take aim at the financial comfort of the people behind the blog, while failing to mention that their boss is the 8th richest person in the world, whose wealth intricately derives from the industry they cover. During Michael Bloomberg’s 12 year stint in public office as Mayor of New York City, his wealth mushroomed more than ten-fold, growing from $3 billion to $31 billion according to Forbes. The sine qua non of the former Mayor’s wealth stems from those iconic Bloomberg Terminals which cost approximately $24,000 a year each and populate, to the tune of hundreds of thousands of terminals, the expansive trading floors of Wall Street and global banks.

According to the Bloomberg article, three men have been churning out all of the content at Zero Hedge, using the joint pseudonym “Tyler Durden” from the Brad Pitt film “Fight Club.” The 1999 cult film, according to Rolling Stone, is “about being young, male and powerless against the pacifying drug of consumerism. It’s about solitude, despair and bottled-up rage.” That ethos is frequently on display at Zero Hedge.

The three “Tyler Durdens” outed by Bloomberg reporters are Colin Lokey, who has now left Zero Hedge in a fit of pique and is responsible for handing over the internal chat sessions from Zero Hedge on traffic-building strategies and other matters. Bloomberg says “the other two men are Daniel Ivandjiiski, 37, the Bulgarian-born former analyst long reputed to be behind the site, and Tim Backshall, 45, a well-known credit derivatives strategist.”

The article notes that “Ivandjiiski has a multimillion-dollar mansion in Mahwah, N.J., and Backshall lives in a plush San Francisco suburb,” suggesting these are “not exactly reflections” of the anti-capitalism reflected in the moniker “Tyler Durden.”

Bloomberg may want to take a deeper look into its own conflicts. On March 14, 2012, Goldman Sachs employee Greg Smith published his resignation from the firm as an OpEd at the New York Times. Smith exposed that some managing directors at Goldman call their clients “muppets” and openly speak about “ripping their clients off.” Smith said the environment at the firm is “as toxic and destructive as I have ever seen it.” By that afternoon, an unsigned editorial response had been posted at Bloomberg, which had a vendor relationship with Goldman at the time, reading in part:

“We have some advice for Smith, as well as the thousands of college students who apply to work at Goldman Sachs each year: If you want to dedicate your life to serving humanity, do not go to work for Goldman Sachs. That’s not its function, and it never will be. Go to work for Goldman Sachs if you wish to work hard and get paid more than you deserve even so. (Or if you want to make your living selling derivatives but don’t know what a derivative is, as Smith concedes in passing that he didn’t at first.)

“Goldman and other investment banks do perform an important role in our economy, and Goldman bankers — most of them, at least — can hold their heads up high. But it is not charity work. Goldman’s clients are mostly very well-off. Smith’s lament that the bank no longer serves their needs above and beyond its own does not tug at our heartstrings.”

The very next day, according to the New York Times, Mayor Bloomberg had raced off to the trading floor of Goldman, shaking hands with the traders and having a burger with CEO Lloyd Blankfein.

Last month we called out Matt Winkler, the Bloomberg News Editor-in-Chief Emeritus, for telling some whoppers about Wall Street reform in his opinion piece at the Bloomberg site.

Zero Hedge had plenty of ammunition to take the high road in responding to the Bloomberg article. Instead, it decidedly took the low road. In a response published at its web site today, it has revealed electronic communications that provide deeply personal medical and health details of its former employee, Colin Lokey.