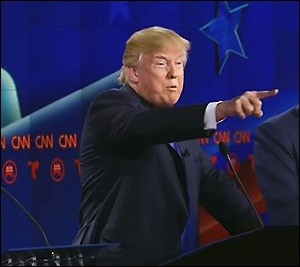 As with the current occupant of the White House, the narrative of fierce independence from Wall Street during the campaign season typically fails under deeper scrutiny. In 2008 we pulled back the curtain on Obama’s claim that he wasn’t taking money from Wall Street lobbyists and found quite a different set of facts. Today, the claim that Donald Trump is not connected to Wall Street and is actually frightening the mega banks is also totally dislodged from the facts on the ground.

Five days ago, the Washington Post ran an article that was headlined “Why the rise of Donald Trump has even Wall Street worried.” It quoted an anonymous source who stated that “I can’t find connective tissue between the financial sector and Trump.”

Similarly, eight days ago the Wall Street Journal reported that Trump’s creditors “mostly are small firms, from New Jersey-based Amboy Bank to specialized real-estate firm Ladder Capital Finance LLC.” The article noted that Deutsche Bank, a German bank, “is the only bank with a big Wall Street presence that continues to lend to him.”

On July 15 of last year, Donald Trump filed a 92-page financial disclosure report with the Federal Election Commission. (He has thus far refused to disclose his IRS tax returns, stating that he is being audited.) On page 47 of his disclosure document, Trumps lists to whom his businesses owe money. Ladder Capital is listed as holding a mortgage of more than $50 million. With no dollar range shown, as is typical, it could be $50 million or $250 million for all we know. Ladder Capital is also listed as holding an additional mortgage on another property in the range of $5 million to $25 million.

The opportunity to find out what Ladder Capital is all about came on February 6, 2014 when the company began trading publicly on the New York Stock Exchange after raising $225 million in an Initial Public Offering (IPO). An IPO requires the public filing of a detailed prospectus with the SEC, which can shed a great deal of light into otherwise dark corners.

Then the prospectus explains what else is going on between Ladder Capital and its Wall Street bank underwriters:

“Some of the underwriters and their affiliates have engaged in, and may in the future engage in, investment banking and other commercial dealings in the ordinary course of business with us or our affiliates. They have received, or may in the future receive, customary fees and commissions for these transactions. Examples include but are not limited to:

“Deutsche Bank Securities Inc., Citigroup Global Markets Inc., Wells Fargo Securities, LLC, Merrill Lynch, Pierce, Fenner & Smith Incorporated and J.P. Morgan Securities LLC, or certain of their affiliates, have had and may in the future have certain roles in connection with our securitizations, including but not limited to, as underwriter, co-manager, trustee, certificate administrator and/or master servicer;

“Affiliates of Wells Fargo Securities, LLC act as loan servicer for our conduit loans, document custodian for all of our loans and custodian for our managed account securities; and

“J.P. Morgan Securities LLC and its affiliates act as our prime broker and also provide us with securities pricing services;

With a ticker symbol of LADR, since going public in early 2014 the stock has lost 31 percent of its market value. The company’s web site explains the nature of the company as “a leading commercial real estate investment trust (‘REIT’) that originates and invests in a diverse portfolio of commercial real estate and real estate-related assets, focusing on senior secured assets.”

The Wall Street banks that are engaged in these business dealings with Ladder Capital do not have a particularly illustrious history since the Wall Street crash. A unit of Deutsche Bank has pleaded guilty to a felony count for its involvement in rigging the Libor interest rate benchmark. Citigroup received the largest taxpayer bailout in U.S. history during the 2008 crash, getting $45 billion in equity infusions, over $300 billion in asset guarantees, and over $2 trillion cumulatively in revolving, below-market-rate loans from the Federal Reserve. Last year on May 20, it admitted to a felony charge brought by the U.S. Justice Department for its role in rigging foreign currency markets.

Merrill Lynch was in the throes of collapse and was merged into Bank of America at the peak of the crisis in 2008. It received approximately $2 trillion in cumulative, secret, below-market-rate loans from the Fed to shore it up as well as taxpayer infusions of equity capital.