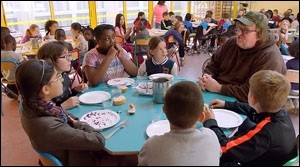 In a Scene from “Where to Invade Next,” Michael Moore Experiences the Healthy Meal Made By a Chef for Public School Students in France

Millions of Americans would have trouble defining even one of the amendments to the U.S. Constitution known as the Bill of Rights — which set forth the individual freedoms we gained through bloody street protests and wars waged by our ancestors. Millions of Americans have never participated in a street protest or marched for a cause they care about passionately. Many Americans have lost the ability to even care – believing the system is hopelessly corrupted beyond cure.

We sat in a small local theatre this past Saturday with friends to watch the new Michael Moore movie, “Where to Invade Next.” Coming in the midst of the presidential debates where one candidate is running on a platform to make America great again while continually insulting women and minorities and another is promising to reform campaign finance while raking in boatloads of corporate dough, the movie had an extra tug of poignancy.

The title, “Where to Invade Next,” is a subtle reminder of how America has practiced its diplomacy in recent years: through bombs and drone strikes on civilians. But there are only fleeting references to war in the movie. The actual story line is to send Michael Moore on a fact-finding mission (our “invader”) to European countries and bring back their best ideas to restore American democracy and the humane treatment of our citizens.

The movie is a powerful visual triumph that shakes us out of our denial of the statistics we’ve been reading for years: The decline in our educational standing in the world; the brutality of our police and prisons; the poverty level and food insecurity of more than 46 million Americans; the lack of affordable health care; the longest working hours in the industrialized world; and crippling college debt. Clearly, it doesn’t have to be this way and Moore shows us, in country after country, just how lagging America has become in the developed world.

Moore’s first stop is Italy where a couple explains how they receive a total of eight weeks of paid vacation each year, including their paid holidays. The couple tells Moore that this is standard policy in Italy, as is accumulating the paid days and rolling them forward if you don’t use them. Next up is France where Moore interviews the chef of a French school and sits with the children to have the nutritious multi-course meal that is prepared from scratch each day.

Moore moves on to Finland to learn how their education techniques are producing the best results in the world – with almost no homework assigned and much shorter school hours. The Finnish experts suggest to Moore that our teaching to the standardized test is what is killing our education system – that students need time to experience childhood and be happy.

In Slovenia, Moore finds that American students are actually moving there to obtain free higher education and avoid the fate of becoming student debt-slaves in America. Moore interviews a few young people who are even unfamiliar with the concept of “debt.”

One of the most emotional episodes for the audience comes with Moore’s tour of Germany. Instead of hiding from their Nazi past, the citizens have decided to confront their shame daily so that it can never happen again. Lamppost-style signs show where the atrocities occurred and memorial markings in the streets show the names of the citizens who were forced from their homes. A school teacher is pictured in the movie with a suitcase on the classroom floor, allowing the students to experience what it would feel like to be told you must leave your home. She asks them to bring the one most treasured thing they would place in the collective suitcase.

Moore shows what America’s signs might look like on lampposts if we were so brave as to confront our cruel past: for example, a sign on Wall Street showing where blacks were auctioned as slaves.

A trip by Moore to Portugal demonstrates how decriminalizing drug use has reduced levels of addiction in the country. In Norway, Moore learns how the country has reduced recidivism by humane treatment of its prisoners. Scenes from America of blacks being beaten and degraded by police are interspersed into the Norway scenes of calm and compassion.

A trip to Tunisia in North Africa shows how women there were able to achieve the equal rights amendment to their constitution that American women have struggled to achieve for decades without success.

Readers of Wall Street On Parade will find Moore’s trip to Iceland of particular note. Iceland was also devastated by the financial crisis of 2008 and called upon an American, Professor Bill Black, to gain insights into how we prosecuted those to blame for the U.S. Savings and Loan crisis of the mid 1980s to early 90s. (Black was litigation director of the Federal Home Loan Bank Board, Deputy Director of the Federal Savings and Loan Insurance Corporation, Senior Vice President and General Counsel of the Federal Home Loan Bank of San Francisco and Senior Deputy Chief Counsel of the Office of Thrift Supervision.)

Unlike the U.S. Justice Department, which did not send one Wall Street banker to prison for his role in the greatest financial collapse since the Great Depression, Iceland meted out prison sentences to many of its bankers. The movie also shows that the one bank in Iceland that was run by women did not collapse.

The right wing, of course, was quick to deride the movie as an exaggerated love fest with socialism. In reality, it is a deeply intellectual dialogue that Moore has been engaging in with the American people through his documentary continuum that began in 1989 with “Roger and Me,” showing the devastation to the city of Flint, Michigan when General Motors closed its plants to tap into cheap labor in Mexico.

By ignoring the rights of human beings and, instead, bestowing ever greater rights on corporations (to ban workers from the nation’s courts, to reap profit windfalls from worker deaths, to effectively steal from workers’ 401(k) plans and create new slave labor in corporate prisons), America has unleashed a far worse tyranny than it ever experienced under King George III – for which the Declaration of Independence was drafted.

Glancing at the baby boomers and elderly in the theatre on Saturday, there were many tears streaming down their faces. It’s one thing to know how far down the ladder of humanity we’ve come as a nation; it’s exponentially more painful to know it happened on your watch; that this is the legacy we leave to our children and grandchildren.