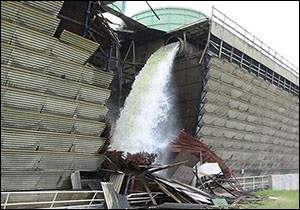 A Cooling Tower Collapses in 2007 at the Vermont Yankee Nuclear Power Plant in Vernon, Vermont. In 2010, Radioactive Tritium Is Found in the Soil Around the Plant.

Neel Kashkari, the newly installed President of the Federal Reserve Bank of Minneapolis, shook things up earlier this week by suggesting options to deal with Wall Street’s too-big-to-fail banks that include breaking them up, as Senator Bernie Sanders has suggested, or regulating them like public utilities such as nuclear power plants.

The nuclear power plant regulatory regime analogy was not a good one. In fact, that’s how we’ve been regulating the complex, high-risk banks with the same kind of catastrophic outcomes to the public in terms of economic impact: think Chernobyl disaster in 1986; Fukushima Daiichi nuclear disaster in 2011; versus global financial meltdown in 2008 resulting from inept regulatory oversight.

Kashkari is not the first to suggest regulating the mega Wall Street banks like public utilities. In 2011, while President of the Kansas City Fed, Thomas Hoenig suggested something similar. After Hoenig became Vice Chairman of the Federal Deposit Insurance Corporation, he delivered an address at the Levy Economics Institute in 2013 where he said that the banks had not been tamed since the crisis, were taking on ever greater levels of risks and that he believed “ever-more complex regulations will follow in an attempt to control these banks’ actions and the risk to the safety net that protects them.  Over time I suspect the industry will be treated like and eventually become public utilities.”

In multiple respects, the biggest Wall Street banks are already being treated as public utilities. They have a steady swarm of government bureaucrats taking their pulse, checking their heart beat, putting them through regular MRIs (stress tests) and gauging if their interconnectedness poses a systemic risk to the financial stability of the United States. (If you have watched them trade in lock step this year, regularly setting new 12-month lows, you already know the answer to the interconnected problem.)

When U.S. monetary policy has to be put on hold out of fear that it might rattle the too-big-to-fail banks, or tighten their lending plans, or spike the prices of their credit default swaps, or make their stock prices tank – we know our bank regulators are not just captured but cowering at the feet of the biggest banks.

Setting up the equivalent of a Nuclear Regulatory Commission to oversee the mega banks as public utilities would not address the problem of regulatory capture or the problem that the banks are simply too interconnected. It would also not address the problem that their asset concentration and economic might, coupled with the Citizens United decision which allows unlimited campaign money flowing to Super PACS, effectively gives them the political clout to dictate who heads their regulators.

In the Obama administration, we have seen this with the Justice Department, the U.S. Treasury Department and the SEC.

More failed regulation is not the answer. Before Wall Street springs another devastating leak, we need to restore the Glass-Steagall Act and break up the too-big-to-fail banks.