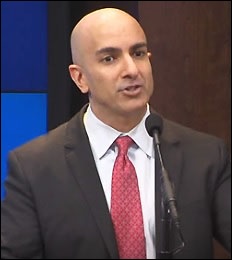 Neel Kashkari, President of the Minneapolis Fed, Speaking at the Brookings Institution

What is it about Goldman Sachs that makes so many people want to go rogue? There is the brilliant Nomi Prins, a former Managing Director at Goldman, who called the firm an “autocratic and hypocritical organization” in her groundbreaking 2004 book Other People’s Money: The Corporate Mugging of America. On March 14, 2012, Goldman Sachs VP Greg Smith tendered his resignation with a scorching oped in the New York Times, lamenting “how callously people talk about ripping their clients off,” and noting that he had witnessed “five different managing directors refer to their own clients as ‘muppets.’ ”

Carmen Segarra didn’t actually work for Goldman Sachs but she was frequently stationed there as its bank examiner from the New York Fed. Segarra should have received a national award in 2014 as the gutsiest bank examiner in America. To back up her position that Goldman Sachs was deficient on conflicts of interest and the New York Fed was looking the other way, Segarra headed over to the local Spy Store, bought a tiny microphone, and made 46 hours of secret recordings at Goldman and the New York Fed to show the cozy culture between the bank and its regulator. After Segarra handed those recordings to ProPublica and public radio’s This American Life, the U.S. Senate hauled the President of the New York Fed, Bill Dudley, into a hearing for some answers. Dudley is still in his position at the New York Fed, Segarra says she was fired in retaliation for refusing to change her findings on Goldman Sachs.

Against that backdrop, along comes Neel Kashkari, a former Vice President of Goldman Sachs who became Assistant Secretary of the Treasury during the financial crisis and oversaw the Troubled Assets Relief Program (TARP). On January 1, Kashkari became President of the Federal Reserve Bank of Minneapolis and, while he is not directly calling out Goldman Sachs for shame, he is calling for the same outcome as Senator Bernie Sanders: breaking up the biggest banks that are still too-big-to-fail and would require another taxpayer bailout if they went under.

Kashkari has even gone one step beyond Sanders. In a speech yesterday at the Brookings Institution, Kashkari said a bold range of options should include:

Option number two, turning mega Wall Street banks into public utilities is nothing short of heresy for a former Goldman Sachs’ guy. But it may be the only exit strategy out of the too-big-to-fail realm that makes any sense. Certainly the living wills and stress tests and piling on more long-term debt are nonsensical solutions that are simply papering over the core issue: these mega banks are insanely interconnected and if one goes down, the financial system is going down, taking the U.S. economy with it – again.

In yesterday’s speech, Kashkari said that the Minneapolis Fed is “launching a major initiative” to consider these “transformational options.”

“Starting in the spring, we will hold a series of policy symposiums to explore various options from expert researchers around the country. We will also invite leaders from policy and regulatory institutions and, yes, the financial industry to offer their views and to test one another’s assumptions. We will consider the likely benefits, costs, risks and implementation challenges of these options. We will invite the media to these symposiums and livestream them so that the public can follow along and learn with us.”

Kashkari said the Minneapolis Fed will have an actionable plan by the end of this year. Let’s all hope we actually have a year to dally on this matter.