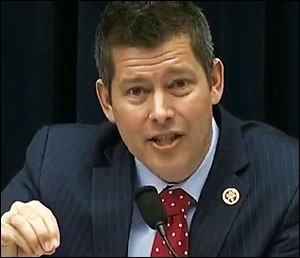 Yesterday during the House Financial Services Committee hearing to take semi-annual testimony from the Fed Chair on monetary policy and the health of the U.S. economy, a tense exchange took place between Congressman Sean Duffy and Fed Chair Janet Yellen. (See video clip below.) Duffy effectively accused Yellen of defying a Congressional subpoena related to a House investigation of a Fed leak in 2012.

The House investigation centers around a quite brazen newsletter put out by a firm called Medley Global Advisors that in 2012 reported what the Fed’s FOMC minutes were going to reveal the following day.  One revelation from the newsletter referred to continued large bond purchases by the Fed as follows:

“Tomorrow’s minutes will reference a staff paper that concludes the market has capacity to absorb purchases this large for a period of time.” When the Fed released its minutes the next day, there was just such a finding.

The month after the deal was announced, Dan Bogler, a 15-year veteran at the Financial Times and former editor of the popular Lex column, became President of Medley Global Advisors.

Today, Bogler is wearing two hats. He is writing articles for the Financial Times under his byline while simultaneously running a firm that sells intelligence to hedge funds and mega global banks. Sometimes his articles at the Financial Times note that he is President of Medley Global Advisors; sometimes they do not.

Congressman Duffy and Jeb Hensarling, Chair of the House Financial Services Committee, sent a June 17, 2015 letter to Yellen and the head of the Office of Inspector General of the Fed, raising the concern that the only reason the OIG has reopened its investigation into the leak was to obstruct the House investigation.

When the hearing opened yesterday, Janet Yellen had an unusually tense appearance. It was later revealed that she and the Committee chair, Hensarling, had exchanged communications regarding the subpoenaed documents in the late afternoon the day prior. Yellen perhaps thought it was possible that she was going to be charged with obstruction of justice.

What the House investigation is currently seeking are excerpts from FOMC transcripts that address the Medley leak issue. (Summary minutes of FOMC meetings are released after three weeks but the full transcripts are not released until five years have elapsed.) Yellen told the hearing yesterday that she is concerned about releasing potentially market moving FOMC transcripts. Duffy clarified that they are seeking only excerpts related to this leak.