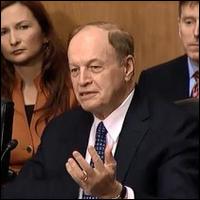 Senator Richard Shelby (R-Alabama), the Chair of the U.S. Senate Banking Committee, has announced a hearing on March 3 at 10:00 a.m. to examine “Regulatory Reforms to Improve Equity Market Structure.” To appropriately conduct that hearing, all the lights should be turned out in the hearing room and the senators and witnesses should have to fumble and stumble their way to their seats in the dark, since that’s what American investors have been forced to do since the 2008 crash – a tortuously long seven years of make-believe financial reform.

Following the 1929 crash, whose economic impact was also swift and devastating, the Senate Banking Committee spent the years of 1932 through 1934 holding comprehensive hearings and investigations on the structure of the stock market. The hearings unraveled, day by day, the frauds that the Wall Street titans of that era were inflicting on a gullible public. The initiating Senate resolution to undertake the hearings was worded thusly:

“A resolution to thoroughly investigate practices of stock exchanges with respect to the buying and selling and the borrowing and lending of listed securities, the value of such securities and the effects of such practices.”

As each devious fraud was revealed, the details landed on the front pages of newspapers in bold headlines. That provided the strong public momentum for the Banking Act of 1933, known as the Glass-Steagall Act, to separate the fraud-prone Wall Street bankers from the banks taking deposits from savers.

No such scenario played out after the 2008 crash.

What might have prompted Senator Shelby to finally look into the rigged structure of the U.S. stock market after all these years? One word comes to mind first: Hollywood. The movie, The Big Short,  is playing in theatres across America, reminding investors of just how rigged Wall Street is and how the ratings agencies, which delivered the bogus AAA ratings to subprime debt, have yet to be reformed and are still being paid for ratings directly by Wall Street firms. Another movie, Money Monster, starring George Clooney and Julia Roberts, is set for release in May and will showcase more financial crimes against the public.

Nothing gets the public’s attention better than the big screen, especially when markets are also screaming trouble. The U.S. stock market selloff in the Dow Jones Industrial Average and the Standard and Poor’s 500 Index in their first week of trading in 2016, marked the worst weekly start to a year in history. Let that sink in. It was worse than during the Great Depression.

Then there is the seemingly inexplicable selloff in some of the biggest banks on Wall Street – the ones whose regulators keep assuring us are just fine with plenty of capital. Those are the same banks, just as in 1929, that take deposits from savers while simultaneously making high-risk wagers around the globe, thanks to the repeal of the Glass-Steagall Act in 1999. And we are constantly reminded about how little we really know about the operations of these behemoths. The U.S. Treasury’s Office of Financial Research has warned that some of the banks are engaging in capital relief trades to limit the amount of capital they have to hold. But no one seems to have adequate information on who the counterparties are or just how much of this financial massaging is going on.

Nor does the public have transparency on what’s hidden in the over-the-counter derivatives contracts between one Wall Street bank and another. According to the Senate’s Permanent Subcommittee on Investigations, the big Wall Street banks have unprecedented involvement in physical holdings of commodities, but there’s a curtain of darkness around this as well. Add to this the same mega banks’ activities in providing liquidity to Exchange Traded Funds (ETFs) and operating their own dark pools – quasi stock exchanges that trade away from the gaze of regulators – and you have a zero foundation for public trust and confidence in this Wizard of Oz market.

Are the wheels coming off this broken bus? The markets seem to be screaming for help from sane regulators – if any can be found beyond the gilded revolving doors.

Last week, a stock that went public on the New York Stock Exchange in 2011 lost 43.6 percent of its market value in 24 hours — from its close on Thursday afternoon to its close on Friday afternoon. That stock was LinkedIn. Its plummeting price looked like a bungee jumper rather than a liquid, well-functioning market.

On Tuesday of last week, the Securities and Exchange Commission held a hearing to examine what happened on August 24 of last year when the Dow plunged 1,089 points in the first few minutes of trading, only to recover almost half of that loss by the close of trading. There were no solid answers. It is a good bet that small investors with standing stop-loss orders got royally fleeced, just as they did in the Flash Crash of May 6, 2010, which saw a similar plunge and recovery.

The carnage on Monday morning August 24, 2015 included large cap stocks trading on the New York Stock Exchange. JPMorgan Chase had closed at $63.60 the prior Friday. Within a matter of minutes, it had plunged to $50.07, an inexplicable loss of 21 percent. By the end of the day’s trading, the stock had recovered much of the lost ground, closing at $60.25, a far milder 5 percent loss. Other household names like Home Depot, GE, Apple, Ford, Colgate-Palmolive, Merck and Verizon also took a beating on the morning of August 24.

One of the reasons the SEC is stumbling around in the dark and will not be able to provide reliable answers to Senator Shelby’s hearing on March 3 is that despite the Flash Crash in 2010, serial mini flash crashes since then, and the gut-wrenching plunge on August 24, the SEC still has not developed a Consolidated Audit Trail (CAT) so that it can see the real-time flow of orders into the market and by whom they are being placed. The stalling tactics on getting the Consolidated Audit Trail implemented are a national disgrace.

The stock market has opened deeply in the red this morning with Bank of America, Citigroup and Morgan Stanley – three of the biggest and most interconnected banks on Wall Street – all touching new 12-month lows in intraday trading.

Is it any wonder the public wants to throw out the political establishment and start over?