As Madoff Airs on TV, Two Anonymous Whistleblowers Are Pounding on the SEC’s Door Again 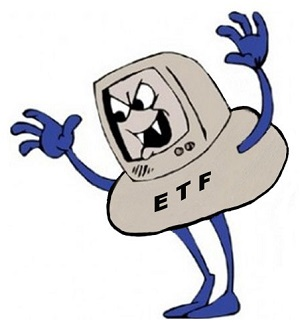 Last night ABC began its two-part series on the Bernie Madoff fraud. Viewers will be reminded about how investment expert, Harry Markopolos, wrote detailed letters to the SEC for years, raising red flags that Bernie Madoff was running a Ponzi scheme – only to be ignored by the SEC as Madoff fleeced more and more victims out of their life savings.

Today, there are two equally erudite scribes who have jointly been flooding the SEC with explosive evidence that some Exchange Traded Funds (ETFs) that trade on U.S. stock exchanges and are sold to a gullible public, may be little more than toxic waste dumped there by Wall Street firms eager to rid themselves of illiquid securities.

The two anonymous authors have one thing going for them that Markopolos did not. They are represented by a former SEC attorney, Peter Chepucavage, who was also previously a managing director in charge of Nomura Securities’ legal, compliance and audit functions. We spoke to Chepucavage by phone yesterday.  He confirmed that two of his clients authored the series of letters. Chepucavage said further that these clients have significant experience in trading ETFs and data collection involving ETFs.

Throughout their letters, the whistleblowers use the phrase ETP, for Exchange Traded Product, which includes both ETFs and ETNs, Exchange Traded Notes. In a letter that was logged in at the SEC on January 13, 2016, the whistleblowers compared some of these investments to the subprime mortgage products that fueled the 2008 crash, noting that regulators and economists were mostly blind to that escalating danger as well. The authors wrote:

“The vast majority of ETPs have very low levels of assets under management and illiquid trading volumes. Many of these have illiquid underlying assets and a large group of ETPs are based on derivatives that are not backed by physical assets such as stocks, bonds or commodities, but rather swaps or other types of complex contracts. Many of these products may have been designed to take what were originally illiquid assets from the books of operators, bundle them into an ETP to make them appear liquid and sell them off to unsuspecting investors. The data suggests this is evidenced by ETPs that are formed, have enough volume in the early stage of their existence to sell shares, but then barely trade again while still remaining listed for sale. This is reminiscent of the mortgage-backed securities bundles sold previous to the last financial crisis in 2008.”

The authors also note in this same letter that they have been presenting their evidence of “significant red flags” and “fundamental flaws” to the SEC since March 2015 and that the industry has not disputed the evidence. However, disclosures of these risks in the product offerings has not been forthcoming either.

To underscore to the regulators just how serious they are about cleaning up the ETP market, in a cover letter dated March 24, 2015, Chepucavage copied every member of the Financial Stability Oversight Council (F-SOC), the body created under the Dodd-Frank financial reform legislation to monitor financial stability in the U.S., including Federal Reserve Chair Janet Yellen, U.S. Treasury Secretary Jack Lew, and SEC Chair Mary Jo White.

“Whether it is realized or not, authorizations to trade exchange traded products by exchanges/self-regulatory organizations (‘SROs’) suggests legitimacy of the product to investors, which is evidenced by the growing interest in ETFs (supplemented through the massive ETF advertising campaigns to investors…)”

Another letter raised the issue that Wall Street On Parade wrote about on December 15, 2015 — the role of “Authorized Participants,” which are mainly the big Wall Street banks.

“The market trading discussed herein… is being executed between investors and counterparties mostly consisting of Authorized Participants, market makers or clearing firms (which may be the same firms), which in many cases is not causing a net creation of shares (purchasing underlying assets) for certain important ETFs.  In some ETPs, there is a conflict of interest between the investor and the contra parties in the secondary market.

“Anyone that has been critical of ETPs has been immediately attacked by the industry, without any factual data from the industry to support their positions. The strategy has simply been ‘attack the messenger,’ which does not address the underlying problems within ETPs.”

The most recent letter from the whistleblowers to the SEC came just nine days ago in advance of the SEC holding a February 2 meeting of its Equity Market Structure Advisory Committee to discuss the bizarre collapse in market prices in the opening minutes of stock market trading on August 24, 2015. In their latest letter, the whistleblowers detailed the role of Exchange Traded Products on that day, writing:

“Of the 1,278 individual circuit breaker trading halts in U.S. traded securities on August 24th, 83% were ETPs.  This equated to the trading in 327 different ETPs being halted, with most of them being halted more than once.

“The halted ETPs were across various sectors and had different investment objectives.  For example, there were ETPs halted that were based on broad indexes, financials, consumer staples, health care, small capitalization, large capitalization (including the S&P 500 Index), currencies and U.S. Treasury bonds. In addition to ETPs based on equities, some of the ETPs were inverse and/or leveraged, which include other derivative instruments as underlying holdings.

“The SPDR S&P 500 ETF (Symbol: SPY) and its sister ETF, the iShares S&P 500 ETF (Symbol: IVV), both tracking the same blue chip companies, deviated from each other. Trading in the IVV triggered two circuit breakers, while the SPY tracked the underlying S&P 500 Index from the opening bell.  At the lowest, the SPY priced the S&P 500 Index at 1,829 and the IVV priced the same index at 1,480; a 349 point difference, which would have resulted in an approximate additional loss to all markets of $3.2 trillion based on the IVV’s price.

“This is similar to the 2010 Flash Crash, when the IVV became unhinged from the S&P 500 Index and the SPY, causing IVV trades to be busted, while the SPY traded without significant disruption.”

These two anonymous whistleblowers are not the only individuals that are calling attention to the threat to the markets posed by ETFs. While the whistleblowers are providing troves of statistical data and academic reasoning to the SEC, the hedge fund billionaire, Carl Icahn, appeared on CNBC last summer and compared what is happening in the junk bond ETF market to a party bus full of drinking revelers who are about to go over a cliff.

The Office of Financial Research (OFR), a unit of the U.S. Treasury which was created under the Dodd-Frank financial reform legislation to provide research to F-SOC on emerging risks in financial markets, included a special section on looming dangers in the ETF market in its 2015 Financial Stability Report. The section was titled: “The Potential Role of ETFs in Generating and Propagating Liquidity Stress.” The report raised an additional troubling aspect in regard to how little regulators actually know about what is going on behind the scenes of the ETF structure. The report notes the following:

“The high concentration of ETF market-making activity reinforces this risk; the top three dealers account for 50 percent of reported trading volume…We note a paucity of reliable data regarding ETF market-making activity, which prevents regulators from fully  identifying potential vulnerabilities in this sector. At present, we rely on self-reported statistics that cover approximately half of all ETF trades and do not include ETF liquidity providers other than registered market makers. We point out that market maker concentration and identities of the most active market makers may shift across funds. Also, ETF trading outside exchanges is difficult to track and little data about this segment are available.”

The report goes on to highlight other breathtaking concerns:

“Some of the larger market makers in the ETF market also appear to gain access to liquidity by placing ETF shares as collateral in the repo market. This finding is based on the Securities and Exchange Commission’s (SEC’s) Form N-MFP data on money market fund portfolio holdings. (Incomplete collateral information limits our visibility on the financing of ETF shares in relation to other types of cash investors.) Consequently, a disruption in the dealer funding markets could affect a market maker’s ability to finance its inventory in ETF shares and decrease the amount of liquidity it provides to support ETF trading. In May 2015, the SEC released a proposal to collect more granular data from investment companies on their repo market activity, as well as ETF trading activity. This information may provide better visibility into the use of ETF shares as collateral in repo markets.”

The ETF market has now grown to $2.9 trillion, according to PwC. Should the SEC still be fumbling around in the dark? This time around, it’s going to be very hard for the SEC to say it had no way to anticipate what was coming.