Democratic Debate: Alan Greenspan’s Spouse Should Not Have Co-Hosted 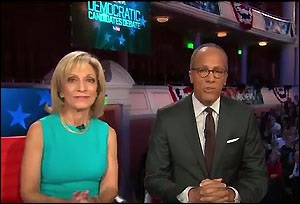 Leave it to NBC to remind us that corporate media is tone deaf when it comes to facing up to outrageous conflicts of interest. The final presidential debate before the Iowa caucuses and New Hampshire primary aired last night on NBC and was co-moderated by Lester Holt and Andrea Mitchell. Given the public focus on Hillary Clinton’s financial ties to Wall Street, it was clear that hard-hitting policy questions on reforming Wall Street would need to be asked during the debate.

So why put Andrea Mitchell on that stage instead of an objective media moderator? Mitchell is married to Alan Greenspan, the man whose 18-year stint as Fed Chairman included a two-term appointment by Bill Clinton’s White House. Greenspan was correctly dubbed by Time Magazine as “25 People to Blame for the Financial Crisis”; was the man who played a key role together with the Clinton administration’s Wall Street sycophants Robert Rubin and Larry Summers in repealing the Glass-Steagall Act that ushered in the devastating deregulation of Wall Street and subsequent collapse in 2008; and the man who attempted to lend credence to the nutty “selfishness is good/government regulation is the enemy” theories of Ayn Rand, Greenspan’s long-time economic mentor.

This is not the first time Mitchell has been called out for a conflicted media role. In 2008, Megan Garber, writing for the Columbia Journalism Review, had this to say of Mitchell’s coverage of the financial crisis:

“You wouldn’t want Laura Bush asking you about the federal government’s reaction to Katrina. You wouldn’t Maria Malan interviewing you about apartheid. And so on. Those interviews would be awkward, but, more to the point, they would be unproductive. They’d yield, at most, partial truths. It’d be naive to think that an interview with Mitchell would be any different.

“In reporting on the financial crisis, journalists need to help viewers and readers and listeners fully understand what we’re facing right now…‘What went wrong?’ should be a standard question Mitchell and other journalists are asking right now. When one potential answer to that question is ‘Alan Greenspan,’ there’s a conflict. A big one.”

Garber went on to recommend in the article that Andrea Mitchell “should be a little less everywhere while the financial crisis is at its height. Maybe MSNBC should consider whether its viewers are served by an anchor and reporter who is, in so many ways, so close to the story she’s covering.”

The second leg of the financial crisis is now upon us with Clinton/Wall Street continuity government being offered up as a serious option. Garber’s comment is as valid today as it was in 2008 – Andrea Mitchell “should be a little less everywhere…”

Greenspan was not part of some minor economic misjudgment. He was a key architect of deregulation policies that produced the greatest economic collapse since the Great Depression. As Dean Baker wrote for The Guardian in 2013:

“Alan Greenspan will go down in history as the person most responsible for the enormous economic damage caused by the housing bubble and the subsequent collapse of the market. The United States is still down almost 9 million jobs from its trend path. We are losing close to $1 trillion a year in potential output, with cumulative losses to date approaching $5 trillion.

“These numbers correspond to millions of dreams ruined. Families who struggled to save enough to buy a home lost it when house prices plunged or they lost their jobs. Many older workers lose their job with little hope of ever finding another one, even though they are ill-prepared for retirement; young people getting out of school are facing the worst job market since the Great Depression, while buried in student loan debt.

“The horror story could have easily been prevented had there been intelligent life at the Federal Reserve Board in the years when the housing bubble was growing to ever more dangerous proportions (2002-2006). But the Fed did nothing to curb the bubble. Arguably, it even acted to foster its growth with Greenspan cheering the development of exotic mortgages and completely ignoring its regulatory responsibilities.”

Adding insult to injury, a few years after Greenspan stepped down from the Fed, his consulting firm was hired by Paulson & Co. – the hedge fund that teamed up with Goldman Sachs to create a subprime loan vehicle designed to fail so that Paulson could short it. Goldman pitched it to customers as a good investment. According to the SEC, Paulson & Co. made about $1 billion on that deal while customers of Goldman Sachs lost approximately the same amount.

In the fall of 2008, with much of Wall Street lying in ruins and economic indicators plunging, Greenspan was hauled before the House of Representatives Oversight Committee. The Chair of the Committee, Henry Waxman, chronicled for Greenspan the recent collapses occurring from either deregulation and/or unbridled greed and corruption. Waxman stated:

“Each of these case studies is different, but they share common themes. In each case, corporate excess and greed enriched company executives at enormous cost to shareholders and our economy. In each case, these abuses could have been prevented if Federal regulators had paid more attention and intervened with responsible regulations.”

Waxman had correctly indicted the Greenspan Fed, which was following the irrational writings of Ayn Rand. Greenspan had written essays for Rand’s “Objectivist” newsletter and contributed articles to her book Capitalism: The Unknown Ideal. One of Greenspan’s articles in the book is titled “Antitrust.” Greenspan makes the totally unsupported case that if government will only get out of the way, moral corporate leadership will move the country perpetually forward. Greenspan writes:

“The churning of a nation’s capital, in a fully free economy, would be continuously pushing capital into profitable areas — and this would effectively control the competitive price and production policies of business firms, making a coercive monopoly impossible to maintain…To sum up: The entire structure of antitrust statutes in this country is a jumble of economic irrationality and ignorance. It is the product: (a) of a gross misinterpretation of history, and (b) of rather naive, and certainly unrealistic, economic theories…No speculation, however, is required to assess the injustice and the damage to the careers, reputations, and lives of business executives jailed under the antitrust laws.”

At the end of this treatise, Greenspan writes, “I am indebted to Ayn Rand for her identification of this principle.”

At the October 2008 Congressional hearing, when Waxman was at last able to get Greenspan to address how he had been blindsided to the epidemic of corruption building right under his nose, Greenspan replied:

“So the problem here is something which looked to be a very solid edifice, and, indeed, a critical pillar to market competition and free markets, did break down. And I think that, as I said, shocked me. I still do not fully understand why it happened and, obviously, to the extent that I figure out where it happened and why, I will change my views. If the facts change, I will change.”

One of Greenspan’s earliest jobs was at the National Industrial Conference Board (NICB), now known as The Conference Board. NICB was created with corporate money in 1916 to counter the devastating negative publicity that grew out of an earlier U.S. era of lax regulation of business. Two specific horrors had galvanized the public’s attention: the Triangle Shirtwaist Factory fire where women and children laborers were burned to death in a New York City sweatshop and the Ludlow Massacre in which a tent colony of striking miners and their families were attacked by the National Guard, leaving women and children dead along with striking miners.

Despite a lifetime of evidence, including the rigging of the Nasdaq stock market by Wall Street players that came to light in the late 90s, the corrupted research and pump and dump schemes that led to the 2001 dot.com crash on Wall Street, Greenspan actually never did let the facts on the ground change his views.

Last night, Andrea Mitchell demonstrated just how conflicted her role as moderator was when she needled Senator Bernie Sanders about his remark that Bill Clinton’s behavior in office was “disgraceful.”

Mitchell posed her question as follows:

“Senator Sanders, let me ask you a question. You called Bill Clinton’s past transgressions, quote, ‘totally, totally, totally disgraceful and unacceptable.’ Senator, do you regret saying that?”

Sanders said he had only made that statement when pointedly asked the question and was sticking to his larger promise to focus on the big issues that concern the American people.

Mitchell pressed ahead with more needling, saying: “You didn’t have to answer it that way, though. Why did you?”

Sanders said words to the effect that it would have been a front page story if he had refused to answer the question, adding: “Yes, his behavior was deplorable. Have I ever once said a word about that issue? No, I have not. I’m going to debate Secretary Clinton, Governor O’Malley, on the issues facing the American people, not Bill Clinton’s personal behavior.”

Bill Clinton was the man responsible for giving Mitchell’s spouse an extra eight years as the second most powerful man in the U.S. Bill Clinton was responsible for making Greenspan and Mitchell a power couple in Washington D.C.  A sitting President of the United States having sex with a young intern is disgraceful, unacceptable and deplorable. Most Americans understand this. That Andrea Mitchell thinks Bernie Sanders’ view on this topic needs to be examined on network television shows just how unsuited she was to moderate last night’s debate.