Four Words That Have the Federal Reserve in a Panic: “Pushing on a String” 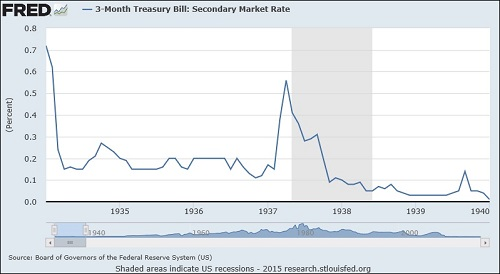 Yesterday, the U.S. Treasury auctioned one-month Treasury bills at a zero percent interest rate. By late afternoon, the bills were trading in the secondary market at a negative yield of 0.0152.

As the above chart shows, short term Treasury bill rates today are tracking a pattern similar to that of the Great Depression. That spike in the yield in the above chart in 1937 came as a result of the Federal Reserve increasing bank reserve requirements – a credit tightening – which sent the economy into a further leg of the downturn and more deflation. After the tightening in 1937, GDP fell by 10 percent and unemployment returned to 20 percent. The well known lesson of the 1937 folly is the major reason many Fed historians do not believe the Fed has any serious intention of raising its Federal Funds rate in the foreseeable future.

Instead of deliberating when to hike rates, some Fed watchers say the U.S. central bank is highly likely to be deliberating a problem known as “pushing on a string.” Here’s an easy way to get your mind around the problem. Cut off a piece of twine about 6 inches long. Place it on a hard countertop. Use your finger at one end of the string to try to push it in a northerly direction. You will observe it wiggle. You will observe it bunch up a little. But you will not see it make any material moves in a northerly direction.

This is where the U.S. central bank, the Federal Reserve, now finds itself in terms of attempting to move the economy north, that is, out of its 2 percent or lower GDP growth since the financial crash in 2008 and 2009 and avoid outright deflation.

Investopedia defines “pushing on a string” this way: “If the core demand doesn’t exist to induce people to part with their money, it can’t be forced through monetary policy. Trying to do so is like trying to ‘push on a string.’ ”

So exactly what happened to weaken the demand of consumers in the United States despite seven straight years of accommodative zero bound interest rate policy from the Fed? The consumer demand went – along with their purchasing power – into the pockets of the 1 percent, through an institutionalized wealth transfer scheme on Wall Street. (See here, here, here and here.)

In August of 2014, the Federal Reserve released a study showing that 52 percent of Americans would not be able to raise $400 in an emergency by tapping into their checking, savings or borrowing on a credit card, which they would then be able to pay off when the next statement arrived. How can the Fed stimulate demand when the majority of Americans have been stripped of their wealth?

As Senator Bernie Sanders explained in the Democratic debate on Tuesday evening, the U.S. now has the greatest income and wealth inequality in the industrialized world. Consumers simply do not have the wherewithal to buy the goods and services produced by the corporations owned by the top 10 percent. (See chart below for how this same dynamic prevailed leading into the 1929 crash and Great Depression.)

Why do we say the corporations are owned by the top 10 percent?

According to the most recent Federal Reserve Survey of Consumer Finances, which is conducted every three years, for the top 10 percent income group, the rate of ownership of the stock market increased 3.9 percentage points from 2010 to 2013, reaching 92.1 percent.

You are seeing stock markets in trouble around the world now because the moneyed class can smell what’s coming. The problem for this group is that there is very little dumb money left to sell to. Which might explain why, according to today’s Wall Street Journal, some major corporations have automatically boosted their employees contributions to their 401(k) plans, without asking the employee, to as high as 10 percent from 4 percent with some corporations planning to raise the contribution rate an additional 1 percent a year until it hits a maximum of 15 percent. To a significant degree, that money then flows into corporate stocks or corporate bonds — but it also further depletes current purchasing power.

According to the article, there has been little outcry from the peasants. (Our word, not theirs.) And, again, to reflect on Bernie Sanders’ warning to the country, until millions of Americans rise up against this and myriad other forms of abuse, the oligarchy will rage on.

Oh yes, and this just in, there will be no increase in Social Security payments over the next 12 months.