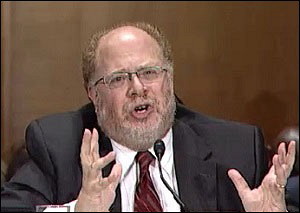 Last week we wrote about the invisible hand’s removal of a negative paragraph on the financial industry from the Pope’s speech before a joint session of Congress and some bizarre shenanigans with Fed Chair Janet Yellen’s highly anticipated speech in Amherst, Massachusetts. This past Saturday, Adam Posen, the President of a powerful think tank, the Peterson Institute for International Economics, delivered a speech at a conference sponsored by the Federal Reserve Bank of Boston, calling the U.S. Financial Stability Oversight Council (FSOC) “a mess.” That speech has gone missing from online access.

FSOC is the body created under the Dodd-Frank financial reform legislation of 2010 to reassure the American people that Wall Street would never again be able to take the U.S. economy, the financial system, and the housing market to the cleaners and then get a multi-trillion dollar bailout. FSOC is chaired by the U.S. Treasury Secretary, Jack Lew (an alumnus of the biggest bailout recipient, Citigroup), along with the heads of every other major U.S. financial regulator.

According to Bloomberg Business, in his conference remarks on Saturday, Posen also said that what individual financial institutions are able to do with discretion from regulators was “huge.” (That two of the mega banks in the U.S., JPMorgan Chase and Citigroup, admitted to criminal felony counts in May for rigging foreign currency markets along with other banks and that serial findings of collusion among the mega banks in multiple markets has now achieved epic dimensions, Posen’s comments would hardly seem an overstatement.)

The New York Times added more gravity to Posen’s remarks with this quote from him at the Saturday conference: “The current U.S. institutional setup is likely to fail in a crisis and will do less to prevent a crisis than it should, and we are likely to suffer from this.”

There are two places one would expect to find such a remarkably candid speech. At the official conference site where other speeches are posted or at Dr. Posen’s official page of speeches and publications at the Peterson Institute. We could not find the speech at either site, nor could we find it elsewhere on the Internet.

The speech by the controversial President of the New York Fed, William (Bill) Dudley, which was also delivered at the conference and throws a lot of cold water on Posen’s positions, is readily available just where one would expect it to be.

Dudley, who was himself the subject of a Senate hearing last November for hubristic regulation, offered these comforting words to the conference audience:

“…we should take considerable solace from the fact that we have made the financial system more resilient to shocks.  We may not be able to anticipate the next area of excess. But with higher capital and liquidity requirements and the use of stress tests to assess emerging vulnerabilities, I think we are much better placed than we have been in the past.”

No one who is paying attention believes “we are much better placed than we have been in the past.” Wall Street has simply been allowed, once again, to hide the extent of its excesses and abuses under the nose of its lapdog regulator, the New York Fed.

This is not the first time that Posen has had some choice words about the Financial Stability Oversight Council. In testimony before the Senate Banking committee on July 8 of this year, Posen had this to say:

“I would be remiss in my duty to this Committee, however, if I did not point out that other countries can legitimately expect better US behavior and practice to emerge from international regulatory coordination as well.  Our regulators, supervisors, banks, and other financial institutions did not cover themselves in glory with their practices in the run-up to the financial crisis of 2008-10.  At a minimum, having the US financial regulators and supervisors be confronted with international questions and standards should reduce the cognitive capture of that community by a set of blinders, as I have argued played a critical role in causing the US financial crisis…

“Arguably, the domestic Financial Stability Oversight Council [FSOC] within the US is if anything primed to be more biased towards lowest common denominator or group think leaving gaps in the US financial regulatory framework than the international Financial Stability Board [FSB]. So, the FSB is a useful check and occasional corrective to the US FSOC process.”

In other words, the U.S. financial system needs an international nanny because we only have wet nurses on this side of the pond.