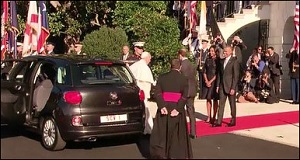 Pope Francis, Who Advocates Against Materialism, Arrives at the White House on September 23, 2015 in a Humble Little Fiat

Pope Francis will address a joint session of the U.S. Congress this morning and is expected to lecture on the country’s ethical and moral challenges. Some feel he should get his own house in order before lecturing others.

President Obama held the largest welcoming event for the Pope yesterday on the White House lawn in the history of his administration, replete with color guards and a fife-and-drum corps. The Pope, who prides himself on disdain for materialism and the worship of money, arrived in a tiny Fiat. (See video below.)

But the American media’s love fest with the Pope wilted in the afternoon when the Pope addressed a group of 300 bishops at the Cathedral of St. Matthew the Apostle in Washington, D.C. The Pope spoke in only cryptic terms about the horrors of sexual abuse of children within the church. He was immediately excoriated in statements from victims of priest abuse, which were widely carried by mainstream media.

The Pope’s laundry list of criticisms of where society is off the rails includes rising poverty, homelessness, income inequality, and climate change but the Pope appeared yesterday to want to push the rape of children by “men of God” into the same dark shadows for which the church has now become notorious. The Pope’s sole reference in his address at St. Matthew’s to the horrific acts upon children by Catholic priests and the bishops who shunted the priests from parish to parish to perpetuate the abuse, was this:

“I am also conscious of the courage with which you have faced difficult moments in the recent history of the Church in this country without fear of self-criticism and at the cost of mortification and great sacrifice. Nor have you been afraid to divest whatever is unessential in order to regain the authority and trust which is demanded of ministers of Christ and rightly expected by the faithful. I realize how much the pain of recent years has weighed upon you and I have supported your generous commitment to bring healing to victims – in the knowledge that in healing we too are healed – and to work to ensure that such crimes will never be repeated.”

Commenting on the “pain” of the bishops and their “courage” was met with outrage by victims of the abuse. Barbara Blaine, President of Survivors Network of Those Abused by Priests (SNAP), released a statement noting that it was bishops who “enabled horrific crimes,” and that only four have resigned. Blaine said further:

“Virtually none of the other US clerics, (out of thousands) have ever been punished in the slightest for protecting predators, destroying evidence, stonewalling police, deceiving prosecutors, shunning victims or helping child molesting clerics get new jobs or flee overseas.

“And no one in the entire US Catholic hierarchy, despite 30 years of horrific scandal and at least 100,000 US victims, has been defrocked, demoted, disciplined or even publicly denounced by a church colleague or supervisor, for covering up child sex crimes, no matter how clearly or often or egregiously he did so.”

Blaine was particularly incensed that the Pope claimed that “such crimes will never be repeated,” stating that “such crimes are happening right now, all across the world.” She said the Pope had confirmed their organization’s worst suspicions, that he, like his predecessors, “will do little if anything to bring real reform to this continuing crisis.”

Dennis Coday, a reporter for the independent National Catholic Reporter, echoed some of the criticism, writing: “I have to wonder where is the forthrightness we have come to expect of Pope Francis. At the very least he could have used the words ‘clergy sexual abuse of minors.’ This oblique reference will do nothing to assuage the fears of victims’ advocates who believe Francis is more public relations manager than crisis manager when it comes to sexual abuse.”

A Pew Research poll conducted in June found that only 53 percent of U.S. Catholics thought Pope Francis was doing a good or excellent job of dealing with clergy sexual abuse, significantly below his approval ratings on other issues.

It’s a dramatic understatement for victims to say the sexual abuse crisis continues in the Catholic Church. In a news story yesterday by the Associated Press, which was widely carried by television outlets, it was suggested that the Church is using legal tactics to stonewall victims. The report noted:

“In 2011, a grand jury accused the Archdiocese of Philadelphia, then led by Cardinal Justin Rigali, of keeping about three dozen guilty priests in parishes. Rigali’s successor, Archbishop Charles Chaput, has worked to restore trust in the archdiocese, which Francis will visit this weekend. Three other dioceses — Gallup, New Mexico; Milwaukee; and St. Paul and Minneapolis — are in bankruptcy court trying to limit settlements with victims. The Archdiocese of St. Paul and Minneapolis is being prosecuted on charges of failing to protect children from a now-convicted priest, and its archbishop, John Nienstedt, and one of his auxiliary bishops stepped down this year.”

Last September, the New York Times reported on a Pennsylvania priest, Rev. Joseph D. Maurizio Jr., who was traveling to orphanages in Central America despite his diocese being aware of charges against him and taking no action to remove him as a pastor. Only when a whistleblower went to the Department of Homeland Security was an indictment brought against the Priest. Just one day before the Pope’s arrival at the White House, Maurizio was found guilty by a Pennsylvania jury of having sex with three boys at a Honduran orphanage, money laundering and possessing pornographic photos of children.

A prosecutor in the case, Assistant U.S. Attorney Stephanie Haines, told the Pittsburgh Tribune that Maurizio got away “with horrific crimes against children for over a decade.”

Last Thursday, USA Today reported that the “Catholic Church has allowed priests accused of sexually abusing children in the United States and Europe to relocate to poor parishes in South America.” Following a year-long investigation, the report found that five men “were able to continue working as priests, despite criminal investigations or cash payouts to alleged victims. All enjoyed the privilege, respect and unfettered access to young people that comes with being clergy members.”

The most strident media critic of the Catholic Church is a Catholic herself – columnist Maureen Dowd of the New York Times. She has been decidedly bolder, and more courageous than any of the bishops the Pope thanked yesterday for their “courage.”

After the horrific grand jury findings in Philadelphia, Dowd wrote a column on two of the young boys impacted by the abuse, Billy and Mark. Dowd accurately describes what can only be viewed as a pedophile cult operating with impunity inside the Catholic Church, passing around children for abuse like sex toys. Referring to the Philadelphia grand jury report, Dowd writes on March 15, 2011:

“It tells the story of a fifth-grade altar boy at St. Jerome School given the pseudonym Billy. Father Engelhardt plied him with sacramental wine and pulled pornographic magazines out of a bag in the sacristy and told the child it was time ‘to become a man,’ the report says.

“A week later, after Billy served an early Mass, the report states that Engelhardt instructed him to take off his clothes and perform oral sex on him. Then the priest told the boy he was ‘dismissed.’

“ ‘After that, Billy was in effect passed around to Engelhardt’s colleagues,’ the report says. ‘Father Edward Avery undressed with the boy, told him that God loved him,’ and then had him perform sex. ‘Next was the turn of Bernard Shero, a teacher in the school. Shero offered Billy a ride home but instead stopped at a park, told Billy they were ‘going to have some fun,’ took off the boy’s clothes, orally and anally raped him and then made him walk the rest of the way home.’

“The report says Brennan knew Mark from the time he was 9. When he was 14, the priest arranged with Mark’s mother for a sleepover. ‘Brennan showed him pornographic pictures on his computer, bragged about his penis size and insisted that Mark sleep together with him in his bed.’ Then the priest raped him as he cried, according to the report.

The Bishop Accountability organization, which has amassed mountains of documents and evidence against priest abuse worldwide, believes that the Pope has yet to fully answer lingering questions about his oversight of priests in Argentina. Pope Francis was previously Jorge Mario Bergoglio, archbishop of Buenos Aires from 1998 to 2013. He also served as president of the Argentine bishops’ conference from 2005 to 2011. On their web site, the Bishop Accountability organization lists questions about the Pope’s oversight, or lack of it, in five abuse cases.

Until the Argentina issues are cleared up, until colluding bishops are punished, until sexual abuse cases are immediately turned over to law enforcement, it is proper for American media to take a skeptical view of this Pope. It’s too bad the White House didn’t exercise the same caution.