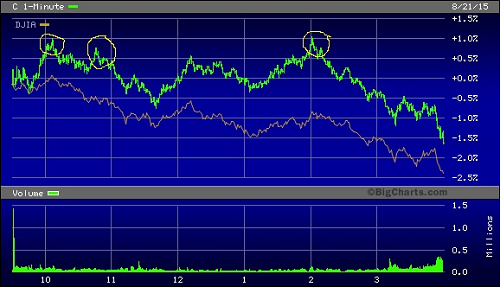 After an 8.5 percent plunge in China’s Shanghai Composite Index on Monday (bringing its loss for the month to a negative 21 percent), a drop in the U.S. Dollar and the U.S. crude oil benchmark, West Texas Intermediate, slipping below $39 a barrel, futures on the Dow Jones Industrial Average at 8:27 a.m. are flashing an ugly opening in New York, with a potential loss of as much as 648 points. (That could materially change before the market opens at 9:30 a.m.)

Mainstream media seem obsessed with what actions the central bank of China might take to stem the rout while also focused on debating if this means a rate hike from the Fed is off the table. The Fed, unfortunately, can only talk about hiking or not hiking since it’s fired all its bullets and has no rate cuts to offer should the U.S. economy need a monetary boost.

What no one seems to be talking about is the serious drubbing the shares of the too-big-to-fail Wall Street banks took on Thursday and Friday of last week. That’s not something that should be swept under the rug when markets are behaving like the early days of the last financial crisis in 2008 — which saw the largest Wall Street bank bailouts in history.

While the stock losses of the largest Wall Street banks were manageable last Thursday, they picked up steam on Friday. What was particularly surprising was that JPMorgan’s losses were on a par with those of Citigroup, with Citigroup shares losing 6.06 percent in the two day period while JPMorgan was off by 6.01 percent. Bank of America, which owns the giant Wall Street stock brokerage firm, Merrill Lynch, lost 7.95 percent in the two-day span.

Citigroup is under a criminal investigation for potential money laundering in connection with its Mexican unit, Banamex, after admitting to a felony for foreign currency rigging earlier this year. One would think the investigation would cause its shares to trade at a significant deficit to JPMorgan Chase during a market rout.

Not to put too fine a point on it, but Citigroup is also the mega Wall Street bank that sucked more out of the taxpayers’ purse during the 2008 crash than any other bank in U.S. history. Citigroup received $45 billion in equity infusions, over $300 billion in asset guarantees and more than $2.5 trillion, cumulatively, in below-market-rate loans from the Federal Reserve – all to prop up a bank that continues to this day to pay fines for malfeasance and cartel activity.

The chart above shows how Citigroup traded on Friday versus the Dow Jones Industrial Average – an index of 30 of the largest companies in the world: companies like Exxon, Coca-Cola, Boeing and Procter and Gamble.

On Friday, when the Dow closed with a loss of 531 points, Citigroup opened at $54.40 and closed at $53.60, a loss of 3.13 percent. But Citigroup made three unusual spikes during the day that were aberrational with what was going on in the broader market. We’ve noted those periods with a yellow circle on the chart above.

The most unusual move came at 2 p.m. when the Dow was deeply in red territory. Citigroup, which had opened at $54.40, traded at a high of $55.05 – levitating itself and shaking off the overwhelming negative financial news ricocheting around the globe. We’ll leave it to others to speculate on just who was buying Citigroup during those unusual spikes.

For years, Senator Elizabeth Warren and many others have been calling for real financial reform on Wall Street, including reinstatement of the Glass-Steagall Act which would separate banks holding taxpayer-backed insured deposits from Wall Street’s high-risk trading houses – putting a true end to too-big-to-fail. Tragically, we now find ourselves in the midst of a full-blown market panic with much of the financial reform of Wall Street left to the work of a future, more courageous Congress and President.