How U.S. Achieves a 5.3% Unemployment Rate: If You Earn No Money, You Can Still Be Counted as Employed 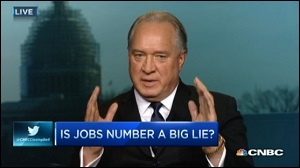 Gallup CEO, Jim Clifton, Worries Aloud on CNBC That He Might Disappear for Criticizing the Government’s Job Numbers (February 4, 2015)

Last Friday’s nonfarm payrolls report of 215,000 new jobs in July with its attendant announcement of an unemployment rate of 5.3 percent drew mostly yawns from the media. That wasn’t the case on February 3 of this year when Jim Clifton, CEO of the polling company, Gallup, wrote a stunning opinion piece on the company’s web site calling the U.S. unemployment rate “The Big Lie.” Clifton raised more media frenzy the next day when he appeared on CNBC and suggested he might “disappear” for questioning the government’s unemployment rate.

Back then, the official unemployment rate was 5.6 percent. Today it’s 5.3 percent – a very healthy looking rate for an economy that is supposedly on the rebound.

One of the bogus aspects raised by Clifton in his opinion piece about how the U.S. government calculates the unemployment rate was this:

“Say you’re an out-of-work engineer or healthcare worker or construction worker or retail manager: If you perform a minimum of one hour of work in a week and are paid at least $20 — maybe someone pays you to mow their lawn — you’re not officially counted as unemployed in the much-reported 5.6%.”

Even for a government hell bent on putting the best possible spin on overcoming the Wall Street train wreck of 2008, which brought on the worst economic slump since the Great Depression, characterizing someone working one hour a week in a lawn job as “employed” seems like the height of duplicity. We decided to check it out.

We went directly to the source: the Bureau of Labor Statistics (BLS), the Federal agency that calculates who is employed and who is not. According to the BLS, the bogus nature of who is counted as “employed,” is even worse than Clifton suggests. Not only is a person counted as employed if they are working one hour a week in a lawn job paying $20, but a worker who makes no money at all donating his or her services to a family business for 15 hours or more per week is also considered employed.

Throughout the rest of America, one’s donation of services typically defines one as a volunteer not an employed worker; but the BLS doesn’t see it that way.

From the Bureau of Labor Statistics web site:

The dismal labor force participation statistics are completely consistent with a tepid economy that can’t get out of the mire of 2 percent annual GDP growth, negligible wage growth, extended periods of unemployment (28 weeks versus the typical 16 weeks in the two decades prior to the 2008 crash), sluggish consumer demand, collapsing commodity prices and persistent warnings of the threat of global deflation.

The cold reality of the actual employment numbers is being molded and massaged daily by corporate media headlines pronouncing strong employment growth. Consider this morning’s headline at a Bloomberg Business interview with Stanley Fischer, Vice Chairman of the Federal Reserve: “U.S. Near Full Employment.”

Update: Labor force participation data for July 2014 has been updated to reflect the seasonally adjusted number.