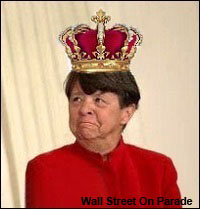 Those complaining that Senator Elizabeth Warren went too far in her complaints against Mary Jo White’s leadership at the Securities and Exchange Commission obviously didn’t see yesterday’s Federal court decision coming. It now appears that Senator Warren would have had good grounds to also charge Mary Jo White with replicating the judicial practices of King George III – against whom the Declaration of Independence was drafted.

U.S. District Court Judge, Leigh Martin May, ruled yesterday in Atlanta that the SEC’s system of selecting in-house judges to hear and decide SEC cases brought against individuals charged with securities violations was “likely unconstitutional.” The Judge imposed a preliminary injunction in an SEC insider-trading case until she issues her final decision in the matter.

During the tenure of Mary Jo White at the SEC, the agency has increasingly used its own in-house judges to decide securities fraud cases. That practice is now being increasingly challenged by individuals demanding their right to have their cases heard before a federal judge and a jury of their peers as provided for under the Seventh Amendment to the U.S. Constitution.

The public is not widely aware that the Dodd-Frank financial reform legislation, that was billed as a means of cleaning up Wall Street, gave the SEC the ability to unilaterally decide if it would bring its cases against unregistered individuals in a Federal Court, with full due process protections, or use one of its own, in-house Administrative Law Judges and its watered-down due process rules.

The Wall Street Journal’s Jean Eaglesham revealed in an article on October 21, 2014 that “The Securities and Exchange Commission is increasingly steering cases to hearings in front of the agency’s appointed administrative judges, who found in its favor in every verdict for the 12 months through September.” Mary Jo White was sworn in as Chair of the SEC on April 10, 2013 and the practice has proliferated under her reign.

That kind of tyranny is what the founding fathers alleged against King George III in the Declaration of Independence. They stated in the historic document that King George III “has made Judges dependent on his Will alone, for the tenure of their offices, and the amount and payment of their salaries” and, furthermore, he was “depriving us in many cases, of the benefits of Trial by Jury.”

Not to put too fine a point on it, but this nation fought an epic, bloody revolution  to preserve the very freedoms that Mary Jo White is now cavalierly usurping. Thomas Jefferson said that trial by jury is “the only anchor ever yet imagined by man, by which a government can be held to the principles of its constitution.”

In his amended complaint, Charles Hill, the plaintiff who won the preliminary injunction against the SEC yesterday, told the Federal Court in Atlanta the following:

“Mr. Hill is an ordinary citizen unregistered with the Commission.  He is not a broker.  Nor is he an investment advisor.  Yet he was still compelled three months ago to participate in an unconstitutional administrative proceeding brought by the SEC to prosecute alleged insider trading violations and impose stiff civil penalties.  Instead of defending himself before an impartial arbiter in a federal court providing fundamental procedural and constitutional safeguards, such as the right to a trial by jury and the right to conduct depositions and other discovery under the Federal Rules of Civil Procedure, Mr. Hill is forced to take part in a proceeding where the prosecutor, judge, and initial appeals court are all instruments in an SEC machinery that operates largely outside the judiciary’s purview.  Addressing the SEC’s pursuit of remedies in administrative proceedings, one federal judge recently remarked that ‘[o]ne might wonder: from where does the constitutional warrant for such unchecked and unbalanced administrative power derive?’ ”

In her preliminary decision, Judge Leigh Martin May noted that “SEC administrative proceedings vary greatly from federal court actions.” She wrote that the Federal Rules of Civil Procedure and Evidence do not apply; hearsay is permissible; defendants are generally barred from taking depositions; counterclaims are not permissible; and motions testing the sufficiency of the allegations are not allowed.

In responding to the SEC’s view that Hill could appeal to a Federal Court after his administrative proceeding was concluded, Judge Martin May wrote:

Unfortunately, the Judge appeared to make her ruling based on the fact that the in-house judges were “not appointed by the President, a department head, or the Judiciary” rather than a finding that Hill’s constitutional right to a jury trial had been denied.

What the SEC has created is the latest expansion of Wall Street’s private justice system. (See Judicial Apartheid: Wall Street’s Kangaroo Courts Part I and Part II.) Wall Street’s epic corruption that collapsed the U.S. financial system in 2008 grew significantly out of its ability to keep its escalating crimes shielded from the sunshine of courthouses open to the public and press. Instead, Wall Street enforced then, and now, a private justice system of mandatory arbitration which bars both the public and press from the hearings, imposes crippling hearing fees on the parties, and strips the parties of the substantive due process protections of Federal Court.

It is a fundamental principle of democracy that government should not be able to take away someone’s right to life, liberty or property until it has convinced a jury of one’s peers of guilt beyond a reasonable doubt. Our Constitution’s Sixth, Seventh and Eighth Amendments spell out those protections in the clearest of terms:

Amendment VI: “In all criminal prosecutions, the accused shall enjoy the right to a speedy and public trial, by an impartial jury of the state and district wherein the crime shall have been committed, which district shall have been previously ascertained by law, and to be informed of the nature and cause of the accusation; to be confronted with the witnesses against him; to have compulsory process for obtaining witnesses in his favor, and to have the assistance of counsel for his defense.”

Amendment VII: “In suits at common law, where the value in controversy shall exceed twenty dollars, the right of trial by jury shall be preserved, and no fact tried by a jury, shall be otherwise reexamined in any court of the United States, than according to the rules of the common law.”

Amendment VIII: “Excessive bail shall not be required, nor excessive fines imposed, nor cruel and unusual punishments inflicted.”

When we, the citizens, of a participatory democracy allow the key constructs of our Bill of Rights to be arbitrarily whittled away by revolving door bureaucrats, we enshrine for our children and their children a very dark future indeed.

Insiders Tell All: Both the Stock Market and the SEC Are Rigged