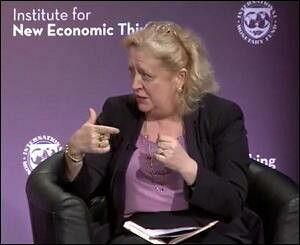 Stanley Fischer, the Vice Chairman of the Federal Reserve, was seated in the audience when author and consultant, Margaret Heffernan, dropped her bombshell at the “Finance & Society” conference on May 6 of this year. The conference panel was themed “Other People’s Money: Governance, Integrity, & Ethics” and Heffernan fired the equivalent of a heat-seeking missile through one of Wall Street’s biggest lies: that there is a legitimate basis for the obscene pay of its CEOs and traders.

“There’s another assumption in this which is performance-related pay is going to make people do a better job. This is not substantiated by the research. It just isn’t…I can find proof that it will make people run a little bit harder for about 15 minutes, but I can’t find the proof that over the long term, over time, it really delivers better work from more qualified people. But this has been a truism in all capitalist societies for a very long time. And it’s about time we started questioning some of these shibboleths because I would say that not only does performance-related pay not deliver superior results, I would say it almost guarantees inferior results because it encourages, incentivizes really some very perverse decision making.” (See Heffernan’s extended comments on video below.)

Stanley Fischer is someone with more than just a casual familiarity with that subject matter. Fischer is a former Vice Chairman at Citigroup, a bank that became insolvent in 2008 and required the largest taxpayer bailout in U.S. history. That was after it had paid almost $1 billion in compensation and stock awards to its former Chairman and CEO, Sandy Weill, and a severance package of $32 million to Jack Grubman, a corrupted stock analyst who was barred from the securities industry for life for issuing fraudulent research to the public to seduce them into buying dog stocks.

If one wants to study “perverse decision making,” there is no better case study than Citigroup. Last week the bank became an admitted felon for conspiring with other banks to rig foreign currency trading. This week one of its former Libor interest rate traders is on trial in London for rigging that market.

According to Bloomberg News, Fischer himself “amassed a personal fortune of between $14.6 million and $56.3 million” during his tenure at Citigroup from February 2002 through April 2005. During that time, Citigroup was repeatedly charged with fraud.

Grubman was forced out of Citigroup in August 2002, while Fischer served on its Board. The New York Times commented in an editorial at the time:

“Critics of Jack Grubman’s last deal, his $32 million severance package, are missing the big picture. Sure, most of the companies whose stock the fabled Wall Street telecom analyst bullishly plugged have gone bankrupt. But look at it this way: While investors lost $2 trillion in the implosion of the sector, his employer, Citigroup, made $1 billion in fees from the feverish dealmaking he helped arrange. It is no wonder the financial giant felt moved to show its appreciation, even as it forced him out.”

The perversity has now come full circle: Fischer, who profited from these ill-gotten gains at Citigroup, is now Vice Chairman at Citigroup’s regulator, the Federal Reserve. Jack Lew, the U.S. Treasury Secretary, who also walked away with ill-gotten gains from Citigroup, chairs the Financial Stability Oversight Council which oversees stability and risks on Wall Street.

Heffernan is one of the most informed writers and speakers on the subject of perverted organizational cultures. In her 2011 book, Willful Blindness, Heffernan examines the cultural underpinnings that allowed priest abuse in the Catholic Church to go unchecked for decades; the willful blindness toward Bernie Madoff’s Ponzi scheme despite years of warnings from Harry Markopolos and others; or the willful ignorance across Wall Street as subprime mortgage frauds proliferated, eventually causing the greatest housing bust in the U.S. since the Great Depression.

In a chapter titled “The Cult of Cultures,” Heffernan writes about a trader at Lehman Brothers, the firm that spectacularly collapsed in September 2008, causing financial panic around the globe. The former Lehman trader is Brad Ruderman, who explains his work culture at Lehman as follows in the book:

“…it is so competitive as to boggle the mind! We’re all on commission and every day of the week, our prior day’s commission would be posted on the window of the managing director’s office. So every day you walk into work your net income is posted for everyone to see. If that doesn’t foster competition for someone already competitive, what would? Of course, that’s what it’s for. For someone like me, if you’re not up there somewhere near the top, it’s a disaster. You have to do something because otherwise, well, you’re nothing.”

Heffernan explains that Ruderman felt he had to earn at least $100,000 a month because anything less than that would make him feel like a loser. But if he hit a high of $140,000 one month, anything less than $120,000 the next month would look like a flop. So, says Heffernan, “he needed a bigger and bigger hit to stay in the gang.”

Ruderman fleshes out his personal motivations in the book:

“I was so motivated to gain acceptance. It wasn’t greed. I didn’t need anything. I had a car. A house. Once I had that, I had what I needed. It wasn’t about stuff. It was about my personal scoreboard with everyone else. Sometimes there’d be three days left in the month and I hadn’t hit last month’s target, so I’d push the envelope to do some things not always in the best interest of my client. I lost all morals, all ethics, in the interest of staying in the gang.”

The culture described by Ruderman permeates Wall Street – even after its epic collapse in 2008, its culture hasn’t materially changed. Stockbrokers and traders are still given bonuses based on the quantity of their commissions, not the performance of their customers’ portfolios. The credit rating agencies that doled out triple-A ratings to junk mortgage products are still paid by Wall Street for ratings. The exact same research conflicts that existed during Grubman’s era litter the Street. Lawyers and bank examiners who refuse to turn a blind eye to the corruption are still being sacked.

A key reason for the unreformed culture on Wall Street is that Wall Street not only continues to encourage willful blindness but President Obama rewards it with promotion to top regulatory posts while the Senate confirmation process buries its collective head in the sand.

The organization that sponsored the Finance & Society conference is called The Institute for New Economic Thinking or INET. If ever there was an era in U.S. history crying out for new thinking, this must surely be it.